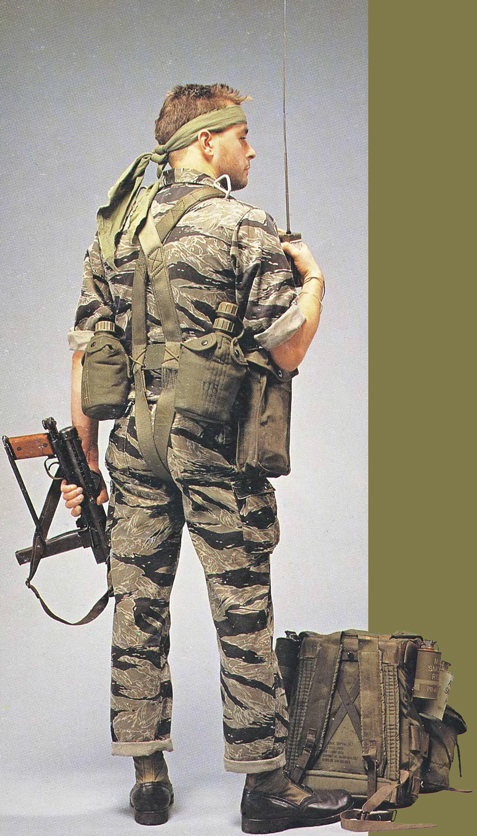 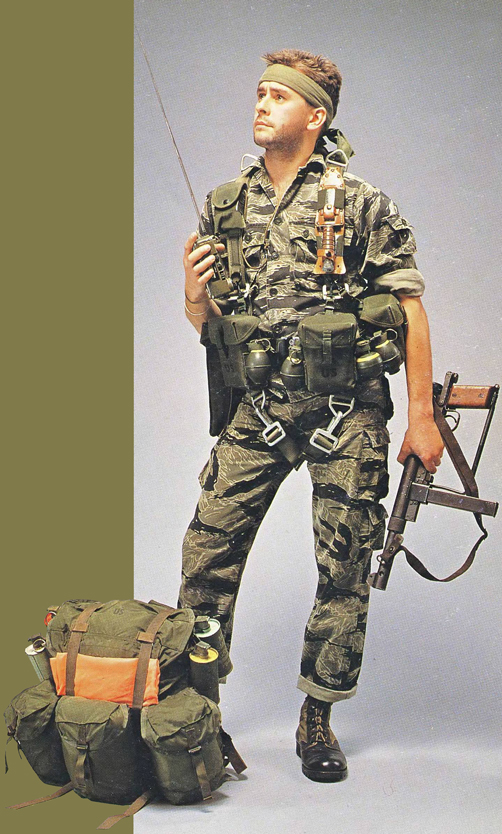 The most unconventional and clandestine operations performed by SF personnel in Vietnam were undertaken by members of MACV Studies and Observation Group - a purposely misleading title which gave little indication of the unit's real function. MACV/SOG was in fact a joint services unit in which Navy SEALs, Marine Recons and Air Force Special Operations pilots all served, though the majority of members were SF personnel. SOG's various tasks included prisoner of war intelligence and rescue, cross-border operations into North Vietnam, Laos and Cambodia, and rescuing downed aircrews. Other missions of a highly sensitive nature included the placing and training of agents in North Vietnam, and the kidnapping or assassination of key enemy figures. In 1967 three main Command and Control units were formed to oversee SOG operations - Command and Control North, Central and South (CCN, CCC, and CCS). The main operational elements of these commands were the reconnaissance teams (RTs), typically comprizing three US and nine indigenous troops.

MACV/SOG personnel were allowed an unparalleled freedom of choice in personal uniforms, equipment and weapons depending on mission requirements. This RT member's appearance is a typical, if conservative, composite.

Tiger-stripe pattern uniforms were worn alongside a variety of other types depending on operational restrictions. Black indigenous or dyed US fatigues were sometimes worn so as to give the impression of enemy uniforms from a distance. Headgear was similarly varied and included issue and locally-made boonie hats, captured enemy headgear, and headbands made from triangular bandages, as here. Tropical combat boots were worn, sometimes with the tread ground off to leave 'sterile' footprints. Enemy footwear was also worn to this end, and a limited test issue was made of a boot featuring a 'bare-foot' moulded sole.

LCE varied according to need but was typically made up of M1956 and M1967 components with additional specially procured items. The 'Stabo' Extraction Harness shown here was often worn as the basis of the LCE. The harness was developed by instructors at the SF Recondo School in 1968, and was designed to extract up to four men at a time in areas where a helicopter was unable to land. Ropes from the helicopter were attached to the D-rings on the harness; the aircraft then lifted the men out thus suspended to a safe landing site.

The 'Stabo' harness is worn here in conjunction with a quick-release belt upon which are fixed M1956 universal pouches and canteens. The large web bag on the right hip is a World War 2 era M3A1 'grease-gun' magazine pouch used to hold the long magazines of the 'Swedish K' submachine gun. The canteen at the right rear of the belt is a modified one-quart plastic with filter attachment issued to SF and LRRP units. The leg straps of the harness are shown secured for extraction; at all other times these straps would be tied up free of the legs. A lensatic compass is taped to the right shoulder of the harness; to the left is taped the popular aircrew survival knife.

The tropical rucksack, shed for the extraction, has an emergency air marker panel folded under the packstraps; this will be used to indicate the team's position. Communications with the extraction aircraft are via the AN/URC-64 Emergency Radio shown here. The URC-64 was a tri-modal four channel hand-held receiver/transmitter typically issued to reconnaissance-type troops. The URC-64 was an upgraded development of the URC-10, which had featured a separate battery unit. The weapon is the 9mm 'Swedish K' (Kulsprutpistole M45 Carl Gustav) introduced into Vietnam by the CIA, and typical of the exotic equipment available to SOG personnel.

By 1971 the withdrawal of US ground units from Vietnam was well under way; for those who remained, however, the war ground on. The front line soldiers of 1970/71 were a significantly different breed from those of earlier years. Attuned to the anti-war sentiments being expressed back home, the young soldiers and Marines had none of the crusading zeal of their predecessors. This lack of enthusiasm for the war manifested itself in a lowering of morale and discipline, especially in rear areas. Racial clashes, anti-war protests and actual combat refusals were all too common. Drug abuse also reached new levels - but, contrary to popular myth, was never tolerated in the field. On operations, however, the fighting efficiency of the troops was generally unimpaired. Most line units in 1970/71 were composed of men who fought with courage and resourcefulness while awaiting their turn to go home.

Official attitudes towards personal dress had become relaxed in the extreme. The general concensus was that the individual's performance was of greater importance than a soldierly appearance. Long hair became tolerated as a front-line privilege; peace symbols, love-beads and other 'hippy' items proliferated, reflecting the sub-culture of the eighteen- and nineteen-year old troops.

The adornments on the boonie hat are typical of personalization by 1971. Grenade rings have been attached to the foliage loops, and a locally-made Specialist's rank insignia is pinned to the front. Civilian 'granny glasses' as worn by John Lennon were popular during this period. The tropical coat is an example which has been heavily modified by its original owner. Both collar and sleeves have been removed and a row of magazine pockets added to the rear. The stencilled face on the back is the 'Alfred E. Neuman' cartoon character from the popular humorous magazine 'MAD'. The 'Vietnam Veterans against the War' badge is a take-off of the MACV insignia with an inverted helmet and rifle substituted for the upraised sword of the original. Notice that the Combat Infantryman's Badge is worn on the left chest: still a source of pride, even in 1971. Colourful neckerchiefs and locally-made beads and peace medallions were all typical for the period.

The 1st Brigade of the 5th Infantry Division were mechanized infantry operating with armoured personnel carriers. As such, minimal equipment is worn save for the spare M16 magazines and two belts of 7.62mm link for the squad's M60 GPMG. He carries in his left hand a captured NVA sun helmet, complete with foliage net and camouflage made from strips of US parachute silk.

The Vietnamese Marine Corps was created by President Diem in 1954, and throughout the war the US Marine Corps supplied officers and NCOs in an advisory role. The VNMC was one of the first Vietnamese organizations committed to the fight against the Viet Cong, and by 1960 US Marine advisors were accompanying VNMC units into action. Like their Army counterparts, the Marine advisors' task was to instil aggressiveness and esprit de corps into the fledgling VNMC as well as providing professional expertise. During 1962 USMC personnel took an active part in every operation that the VNMC undertook, as well as establishing the VNMC training depot at Thu Due. By 1964 the VNMC was brought up to Brigade strength and fielded over 6,000 men, though the number of USMC advisors never topped two dozen officers and NCOs. In 1969 the VNMC were raised to Divisional status with a strength of over 10,000. During the 1972 Communist 'Easter Offensive' the Marine Division played an important role in retaking lost ground. Helping to halt the enemy advance in the Dong Ha area and in the defence of Hue, the Division fought well, living up to its elite status among South Vietnamese units.

Like many US advisors this USMC Captain has outfitted himself in the uniform of his host unit, with only a few concessions to his parent organization.

It is a common misconception that the US Army introduced the 'tiger-stripe' camouflage clothing into Vietnam; in fact the VNMC developed and adopted the pattern in I960. It was descended from the French 'lizard' pattern which was worn by French and colonial airborne troops during their involvement in the early 1950s. Eventually anyone with a claim to an 'elite' status was able to procure locally-manufactured tiger-stripe uniforms in a bewildering range of style, pattern and fabrics. The original from which all derived was this VNMC uniform.

This VNMC pattern uniform has several identification points. The major recognition feature of the shirt is the reinforcement at the shoulder, rarely found on any other uniforms of this type. Shoulder straps were common, as were pen-pockets on one or both upper sleeves. The colour of VNMC tiger-stripes has an overall 'blue' tone and the fabric used is always a lightweight cotton.

The uniform illustrated is one which belonged to a US Marine advisor and is a typically mismatched set of VNMC tiger-stripes in two slightly differing schemes. The subdued US Marines and colour name tapes were unique to the USMC advisory group. The colour insignia are that of the VNMC on the left shoulder and the post-1969 Marine Division on the right pocket. US Marine Corps officers wore rank insignia on both collar points as, unlike their Army counterparts, they have no 'branch'. The black web belt worn with a USMC open face brass buckle was also exclusive to VNMC advisory duty.

Headgear is, unusually, the dark green beret of the VNMC worn Vietnamese (French) fashion, pulled down to the left with the badge above the right eye. A more common form of headgear among USMC advisors was a Marine utility cap made up from the same tiger-stripe fabric as the uniform.

Three of the most commonly used packs with a range of items which might be carried in them or attached externally: 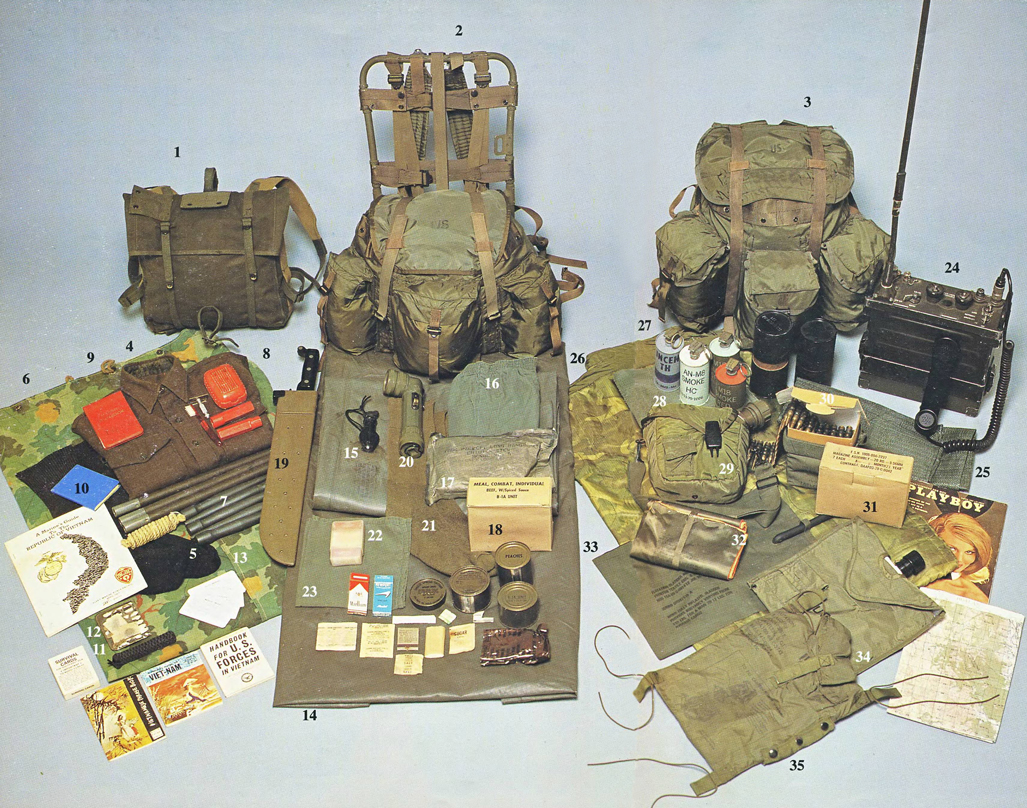 US Army M1956/M1967 Load Carrying Equipment and accessories, for rifleman armed with M16 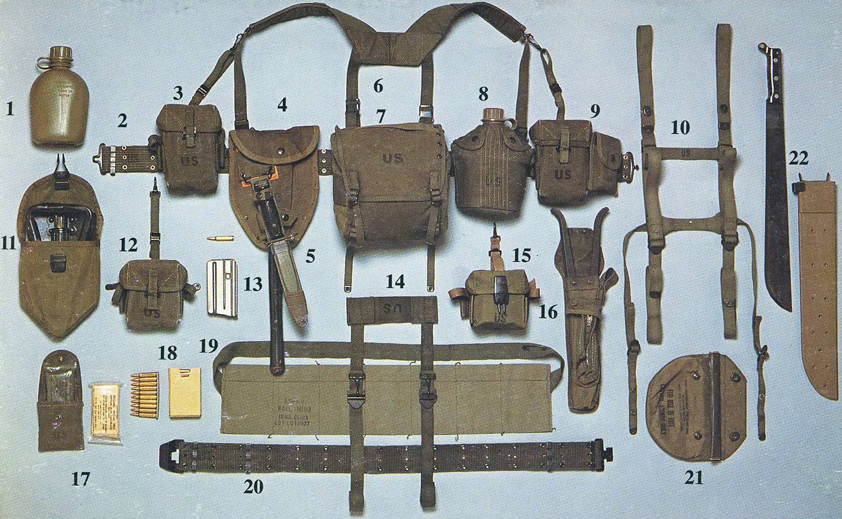 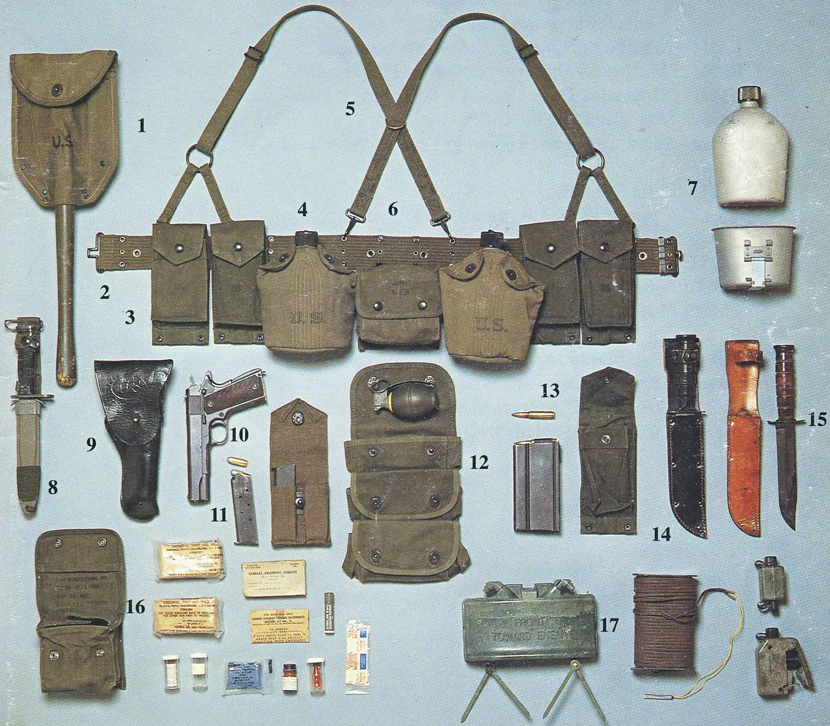 The most accessible visual reference ever published to the actual appearance of the US fighting man on the ground in Vietnam. KEVIN LYLES, one of the most respected of today's military illustrators, has turned to photography - with live models, and an extraordinary range of original uniforms and equipment from many private collections - to present full colour, full length studies, from both front and rear, of more than 40 individual subjects. Infantry and Marines, armour crewmen and helicopter pilots, Special Forces and LRRPs, paratroopers and ARVN advisors, medics, nurses, MPs, RTOs, machine gunners - all are represented; and supplemented by close-ups of web gear, packs and their contents, insignia, etc. The photographs are accompanied by specific and detailed captions, talking the reader through the changes to uniforms and equipment during a decade of intensive, combat-led development. For collectors, historians, artists and modellers of the Vietnam War, this book is the one they've been waiting for since the 1970s.