The Lockheed SR-71 Blackbird is the most spectacular performer ever to leave the ground under its own power and spread wings. Thirty years after entering service, the Blackbird is aloft again after a premature retirement. It is still the world's fastest and highest-flying operational aircraft. 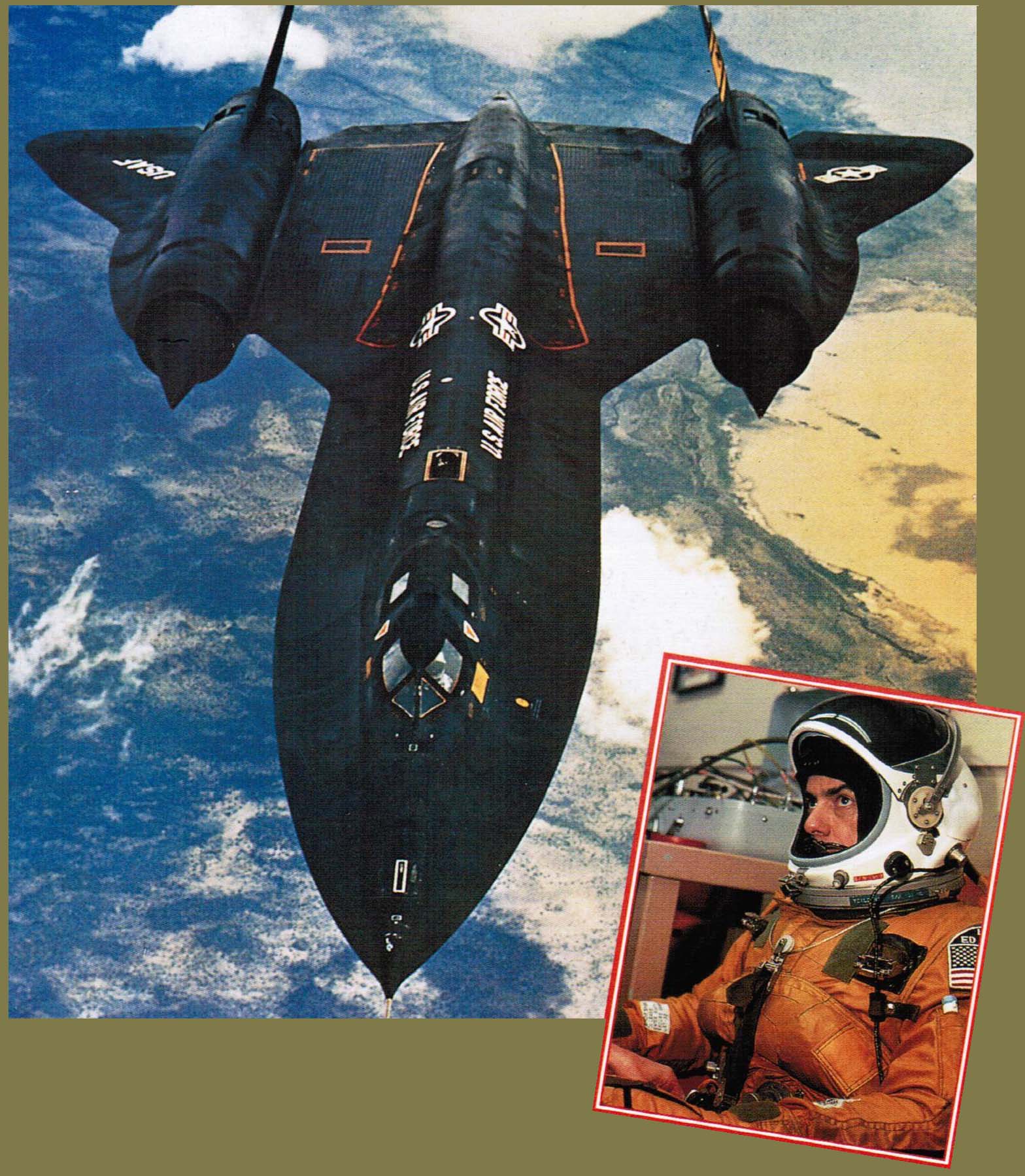 SR-71s operate at the extreme edge of the Earth's atmosphere, and their crews need to wear space suits to have a chance of surviving in the event of an emergency.

Eye in the sky

When it first flew in the 1960s, the black, needle-nosed SR-71 was an amazing performer. Three decades later, the Blackbird's capability continues to be unmatched, and the superfast jet has been pulled out of early retirement to resume reconnaissance flights. A pilot who watched this speedster return to flying condition called it a "magic machine."

But the Blackbird is more than an incredibly spectacular flier. Using cameras and electronic sensors, the SK-71 can look down from above or peer sideways hundreds of miles into enemy territory with a clarity that no other reconnaissance aircraft can equal. Before the Cold War ended, the SK-71 flew in support of the NATO allies, usually staying on its side of the border while spying on the other side.

The SK-71 has very powerful engines and uses special fuel, requiring its own tankers for long missions. Though space satellites have taken over many aerial eavesdropping duties, this "eye in the sky" with pilot and observer on board will continue to be used sparingly, like the treasure it is, when a crisis erupts somewhere around the globe. 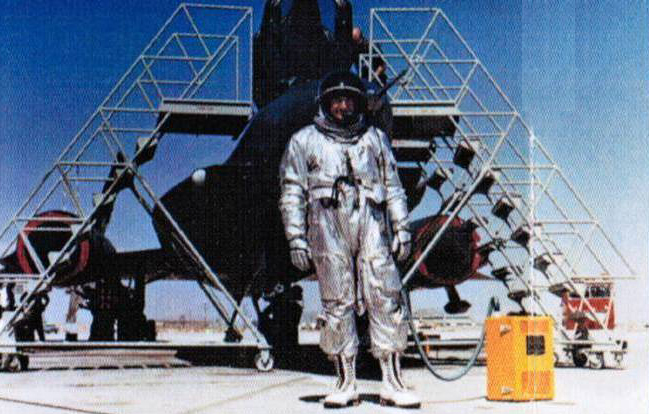 Above: It took a lot of effort to keep the SR-71 and its space-suited pilots in the air. One estimate has put the cost of flying the Blackbird at more than $200,000 per hour.

Below: For many years the U.S. Air Force would say only that the Blackbird cruised "above 80,000 feet." It is now known that the jet can fly at at least 100,000 feet without any difficulty and can probably zoom even higher.

The 9th Strategic Reconnaissance Wing of the United States Air Force is housed at Beale Air Force Base, California, with detachments to Kadena on Okinawa and RAF Mildenhall in England.

Range: More than 2,500 mi. without refueling; intercontinental with aerial refuelling. 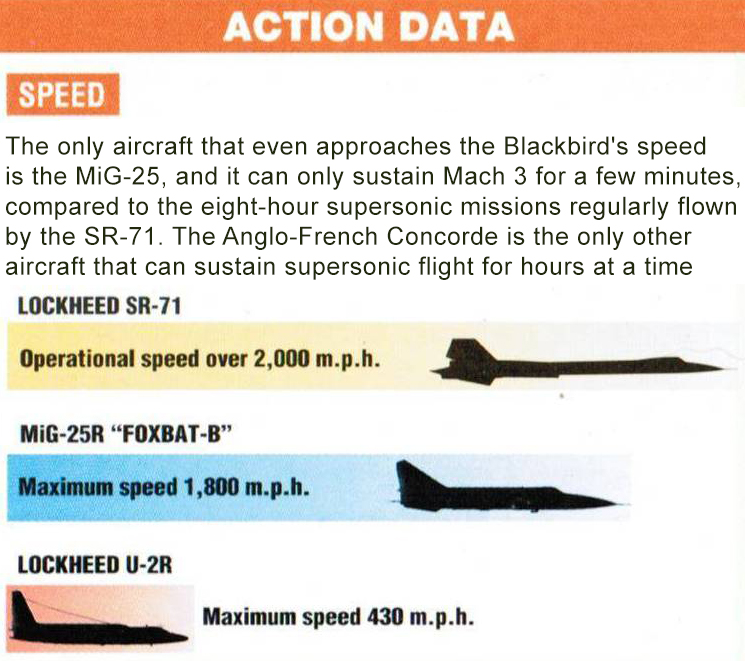 The component parts of the Blackbird fit very loosely to allow for expansion at high temperatures. At rest on the ground fuel leaks out constantly, since the six large tanks in the fuselage and wings only seal at operating temperatures. There is little danger of fire, however, since the fuel is very stable with an extremely high flash point. 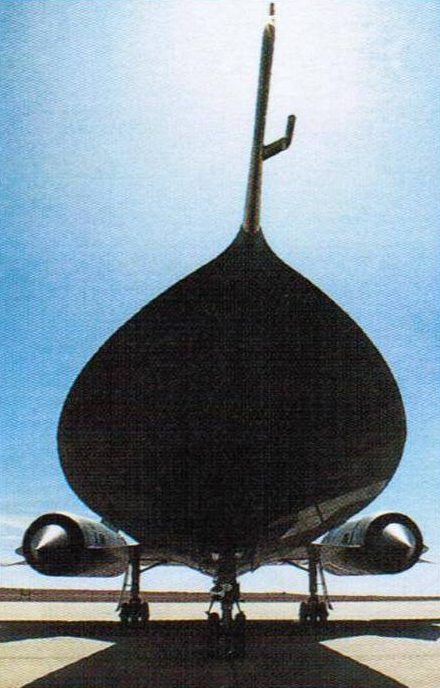 The SR-71's shape is one of the first examples of the use of stealth technology to reduce the radar cross- section of a combat aircraft. 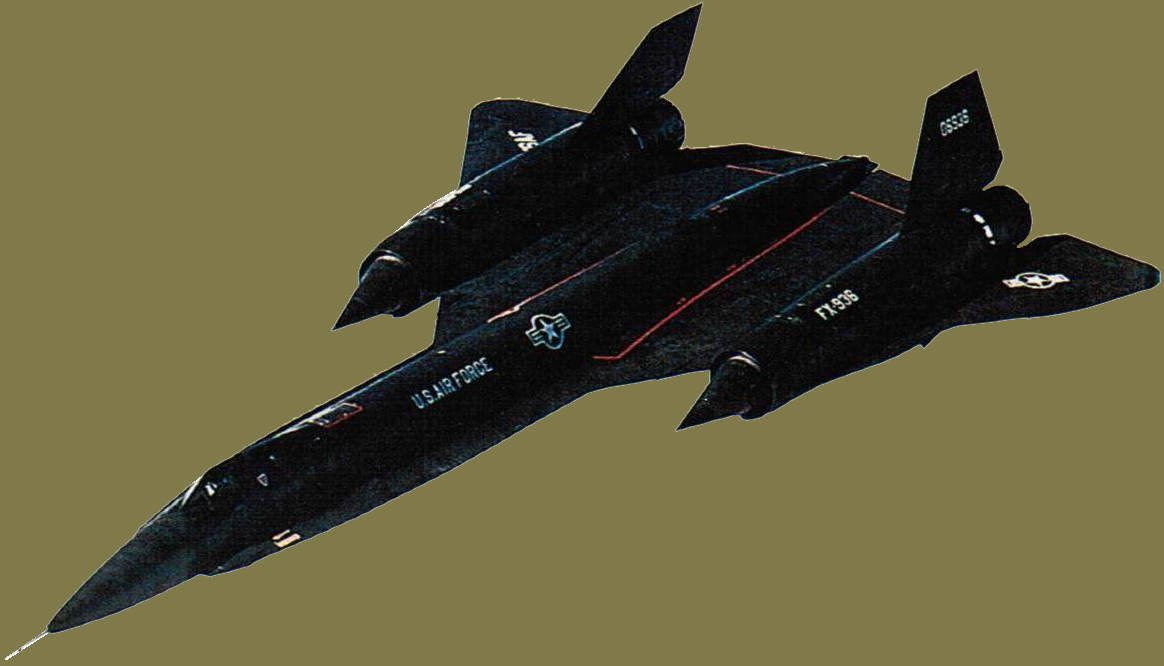 The original CIA spyplane was developed into an armed interceptor. The YF-12 was equipped with radar and missiles carried in an internal bay. 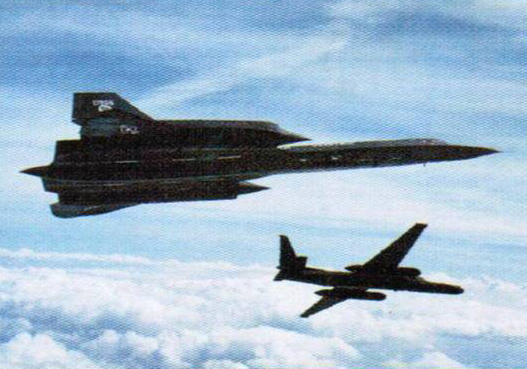 This unique reconnaissance ship came from Lockheed's top-secret "Skunk Works", the developers of other high-performance aircraft such as the U-2 (below). 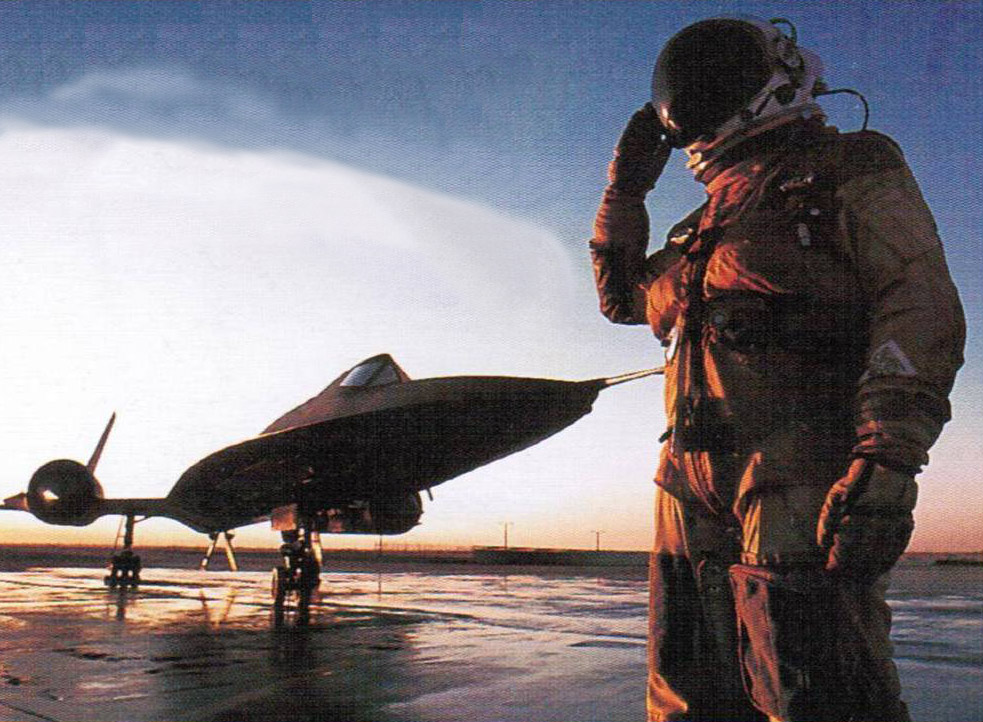 Spy in the sky

In the SR-71's heyday, a pilot could set off from one of its three main bases and get a photograph of any part of the earth's surface within six hours.

The SR-71's engines run on JP7, a special low-volatility fuel. A fleet of specifically modified KC-135Q tankers keep the Blackbird in the air.

▶ Blackbird missions over North Vietnam were the fastest ever flown in combat.

▶ The pressure suits worn by the crew are identical to those used by astronauts on space shuttle missions.

▶ One version of this spyplane carried the D-21 reconnaissance drone, launched in flight at supersonic speeds.

▶ At high speed and altitude, friction causes the metal skin of the SR-71 to heat up to 400 Fahrenheit.

The Lockheed F-117A "Stealth" fighter is one of the most sophisticated warplanes ever built. Almost invisible to radar, the F-117 has revolutionized air warfare. It was operated at first under conditions of total secrecy, but in 1991 the U.S. Air Force deployed it openly to Saudi Arabia for service in the Gulf War. Ranging the night skies over Baghdad with impunity, it struck the most heavily defended Iraqi targets with stunning effect. 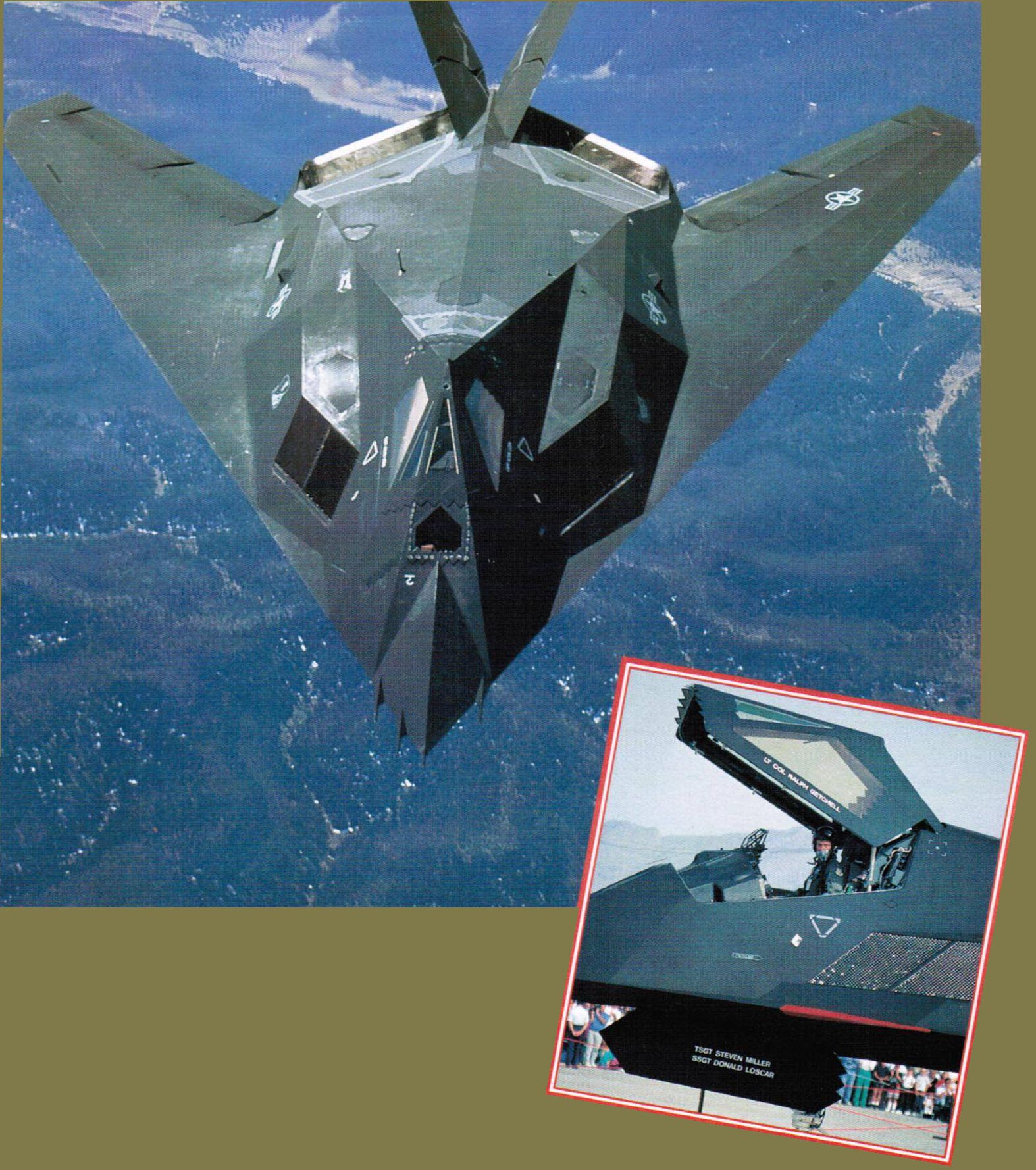 The intense secrecy surrounding Stealth meant that it was not until the late 1980s that the F-117's true shape was revealed. And that angled, faceted shape was like no other aircraft.

The sky over a modern battlefield is a dangerous place. Radar-guided missiles and guns endanger any aircraft flying more than a few inches above the ground. Flying fast and low makes survival more likely, but at the same time makes hitting the target a matter of split-second timing.

In an attempt to counteract the seemingly impossible advantage of the defenders, Lockheed's shadowy "Skunk Works"- the Advanced Development Project Office - was contracted by the U.S. Department of Defense in the late 1970s to produce a low- observable strike fighter. Operational by 1983, the F-l I7A Stealth fighter is perhaps the most unusual aircraft ever flown.

The F-117's unusual shape and the advanced material from which it is manufactured make the Stealth fighter all but invisible to radar. By flying at night, the black jet is also invisible to the eye.

Because it can't be detected, the F-l 17 can take its time in attack. This makes for remarkably accurate weapons delivery, as was shown to great effect during the Gulf War. 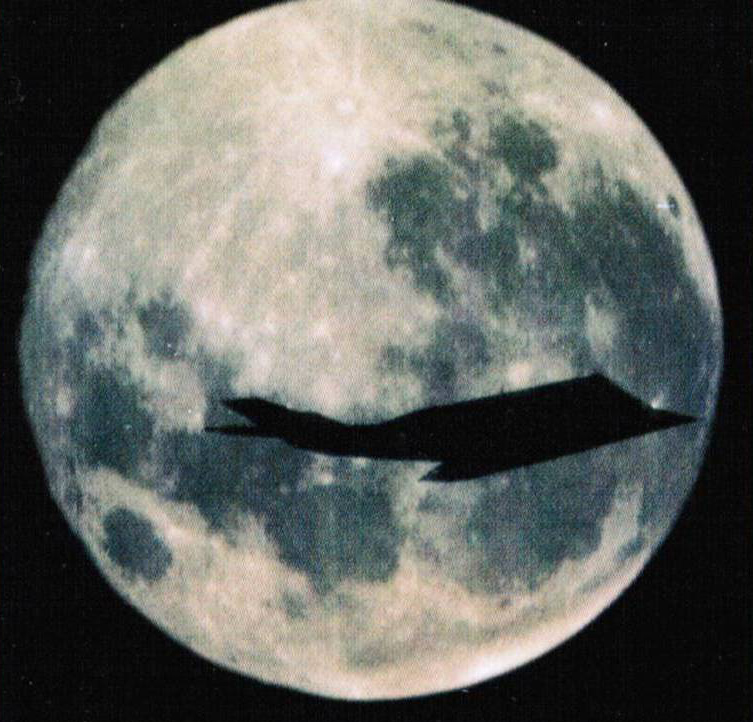 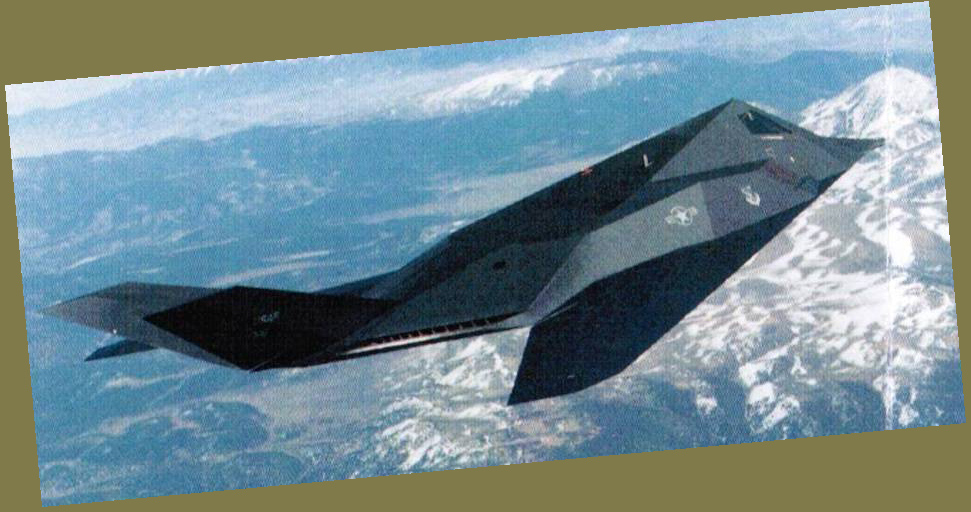 The unique arrow shape of the F-117 is naturally unstable. Stability is maintained by computerized fly-by-wire controls. 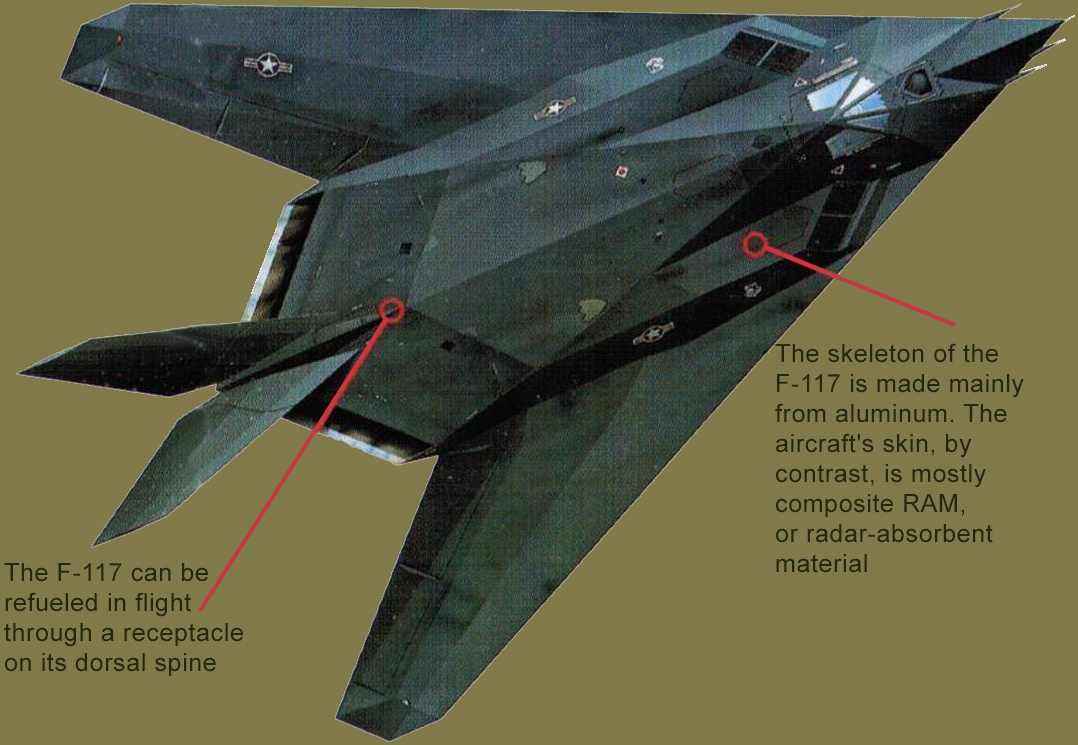 The F-117A is operated by the 49th Fighter Wing (formerly the 37th FW) based at Holloman Air Force Base in New Mexico. 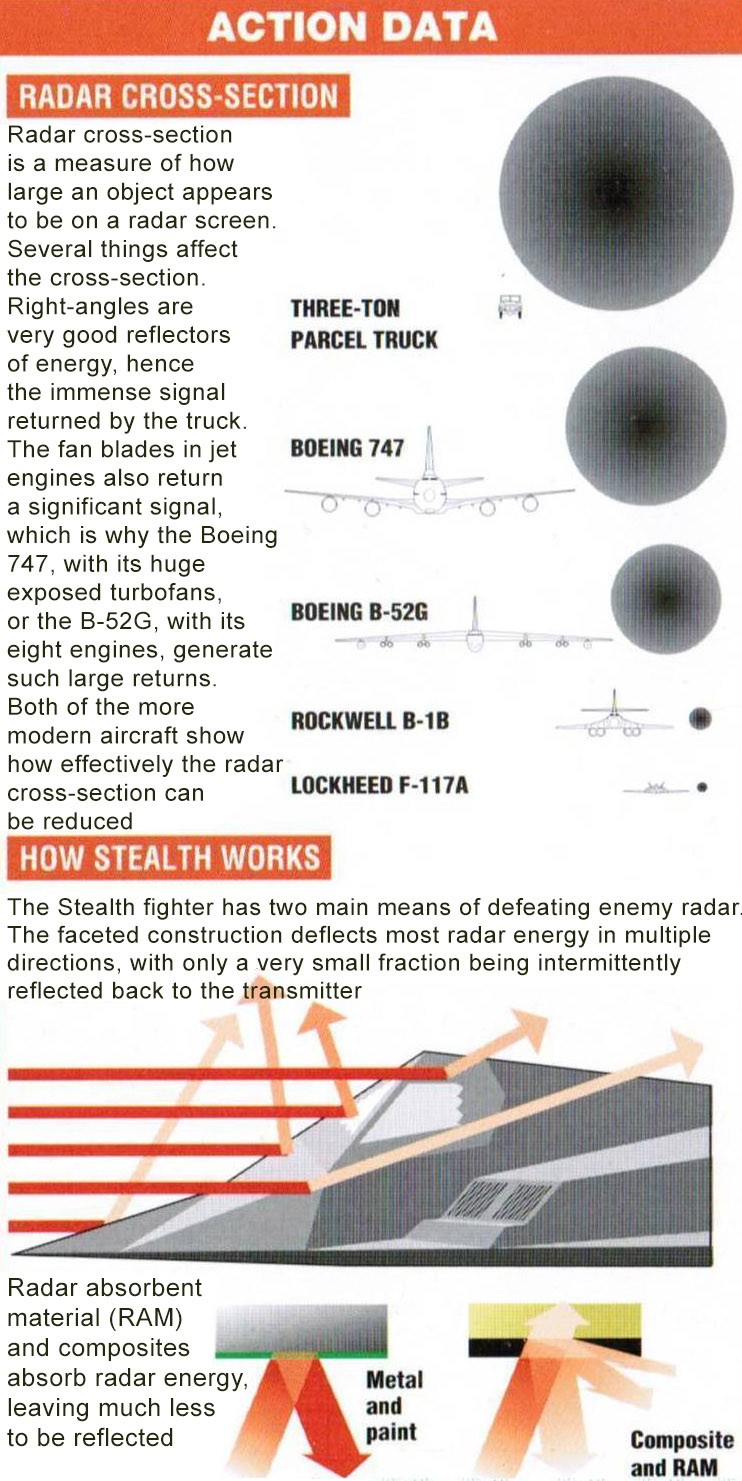 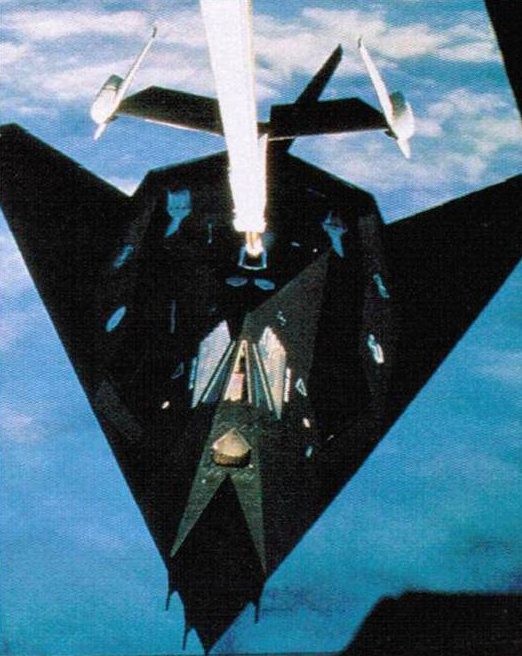 Rumors abounded that the handling of the F-117 was somewhat erratic, especially when refueling. As a result, one of the first nicknames for the plane was the "Wobblin' Goblin" 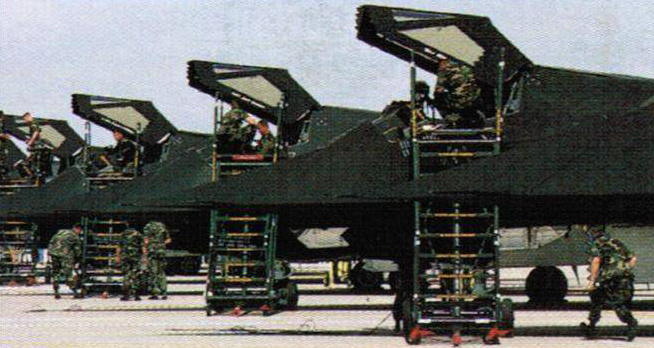 Only 59 production F-117s were built, yet the total cost of the program is over six billion dollars. 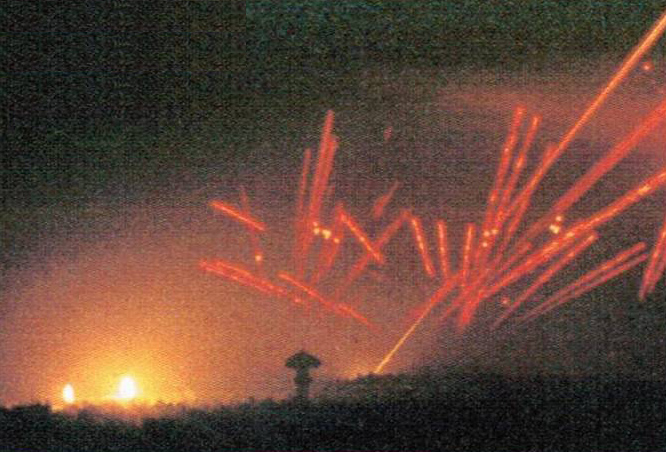 The F-117 was the only Coalition aircraft able to operate with complete freedom over Baghdad's extensive antiaircraft defenses. 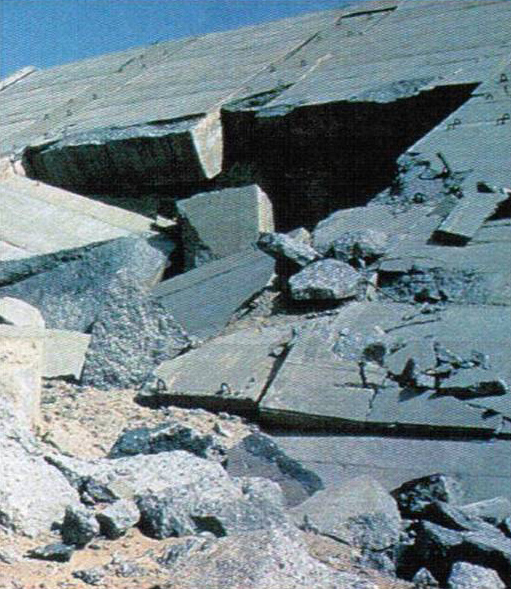 Forty F-117s were deployed to the Gulf.

▶ The 40 F-117s deployed to the Gulf flew more than 1,270 missions, dropping 30 percent of all precision-guided munitions.

▶ One B-52 bomber has a larger radar cross- section than all the F-117s put together.

▶ The F-117 was operational for seven years before it made its first public appearance.

▶ The F-117's weapon system can hit a target one yard square.

▶ The F-117's radar cross-section is about one one-hundredth of a square yard - about the same as that of a seagull.