Hussar armour, c. 1580-1610. The cuirass is derived from the Italian anima-type breastplate, constructed of horizontal lames. It is worn over a mail shirt, with a kapalin helmet, and leopard skin. (MWP)

The death of Sigismund August in 1572 brought to an end the great Jagiellonian dynasty. Thereafter Polish kings had no hereditary rights, and were elected by the nobility. The first elected king was Henry Valois, a Frenchman whose rule in Poland lasted barely 118 days before he ran away to take the throne of France as Henry III. His successor, Stefan Bathory, Prince of Transylvania, was followed by the three much under-rated kings of the Swedish Vasa family: Sigismund, and his sons Vladislav and John Casimir. Their claims to the Swedish throne were a major excuse for the Swedish wars of this period. The ineffectual Pole Michael Wiśniowiecki was succeeded in 1674 by John III Sobieski (actually crowned in 1676), another Pole, whose reign was marked by his almost obsessive preoccupation with the Tartars and Turks. The King of Poland, in this period, was always simultaneously Grand Duke of Lithuania.

Winged Hungarian/Polish hussar fighting a winged Turk. The wing was not restricted to Poland: in its earlier forms it adorned the shields and horses of riders in much of 16th-century Eastern Europe. Woodcut from Adam Czahrowski's Rzcezy Rozmaite... 1598 (PAN library, Kórnik) 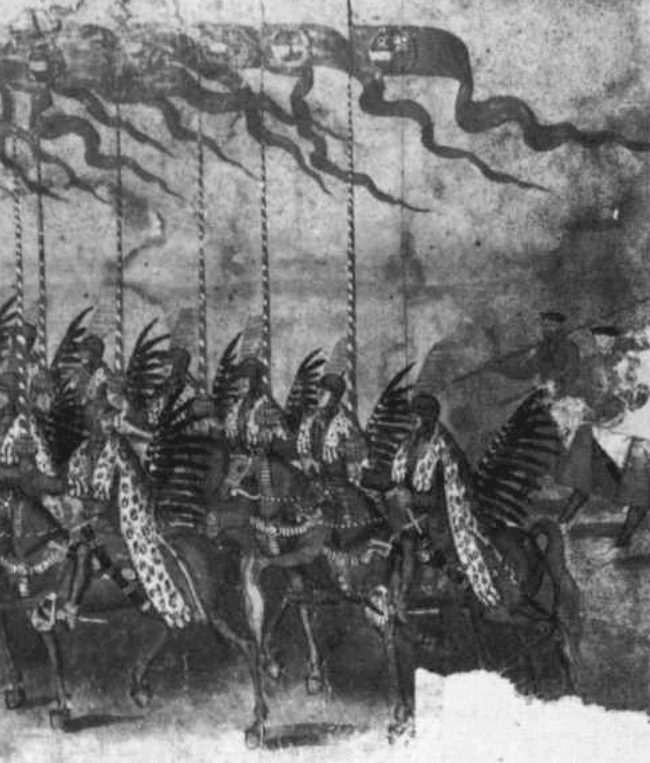 Hussars from Gostomski's troop, 1605. They carry uniform two-tailed red lance-pennants, bearing snake-like emblems and Gostomski's quartered coat of arms in a green wreath, on a red/while striped lance. The troop standard in of similar design, but larger. Hieronym Gostomski, Voivode of Poznań, was a close supporter of King Sigismund III, so it is not surprising that his private units figure prominently on the Gonstantia Roll. (Royal Castle, Warsaw)

(There is insufficient space here to list every campaign and war in this period, particularly the numerous Cossack revolts and Tartar raids: indeed, outside of the 'Golden Peace' of 1638-48, there was hardly a year in which a Polish army was not in action.)

The Polish army was raised by several methods. The soldiers, however, were organised and equipped on lines which were largely independent of their source.

The peacetime standing army was developed from the Obrona Potoczna or 'Continuous Defence' force, used mainly to guard the south-eastern regions of Poland against raiding Tartars. In 1562/3 this became the Kwarciani or 'Quarter' army, so called after the fraction of the Royal revenues which were reserved for maintaining them. They num¬bered about 3,000-5,000 mainly lightly armed cavalry equipped with a high proportion of firearms. After the destruction of the Kwarciani at Batoh in 1652 the institution was abandoned and replaced by a more general system, based on the so-called Komput (hence 'the Computable Army'), which could be more easily expanded in time of war, and which was organised on a territorial basis.

In time of war the size of the standing army could be expanded hugely, by increasing the size of existing units and by raising additional formations of paid soldiers, although it was usually only with great reluctance that the Seym approved the funding offerees large enough for the task at hand.

Other permanent forces in Poland were the garrisons of several strategic forts; the armies of the cities; private armies belonging to the wealthier magnates; and the Royal Guard, which was in effect the king's own private army. (These will be dealt with in the forthcoming second Men-at-Arms title.)

"District soldiers' were occasionally raised after 1613-19. These were paid soldiers raised for short intervals on the basis of decisions by regional seymiks. Their chief purpose was to maintain the law during the often long periods between the reigns of the elected kings, and to provide immediate local cover against raids, invasions and civil disturb¬ances. Organisation of units differed little from those of the rest of the army.

Peasant levies could be raised from royal estates on a semi-permanent basis at minimal cost to the state: the Wybraniecka infantry, and Lanowe and Dymowe (literally 'acreage' and 'chimney') levies raised in the 17th century to supplement the Wybraniecka levies. These were in effect a 'human war-tax' for a certain number of acres of land or, in towns, a number of houses (i.e. chimneys). In towns the duty was to provide an infantryman; in the countryside, where horses were more readily available, a fully equipped mounted man. Often a payment in cash was preferred, and certain provinces paid all their dues in cash. These levies were quite often dispersed among regular units.

Aside from regularly organised and paid soldiers, unpaid volunteers and local peasantry also played a vital military role. Units of volunteers were often raised by adventurers, such as the famous Aleksander Lisowski. These received no pay, and were not usually included on any registers, but were given the right to keep any booty that came their way with no questions asked. Poorly disciplined, they often proved more trouble than they were worth: but they left behind them a trail of destruction that few enemies could ignore. Ad hocbands of peasants were particularly effective during the Swedish invasion of 1655-60; the Swedes were terrified of the deep Polish forests, where they were often ambushed by these scythe-wielding rustics. 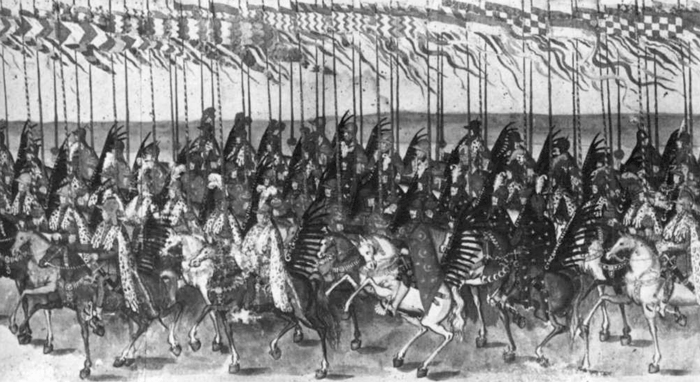 Hussar unit on the Constantia Roll, marked on a small scroll above it as the 'Royal Banner'. Note the huge variety of pennant designs and the decoration of lances. This may he a composite unit with each rank made up from a different hussar troop that took part in the ceremonial entry. It was however, quite normal for a proportion of men within a single troop to wear animal skins while others wore patterned capes. (Royal Castle, Warsaw) 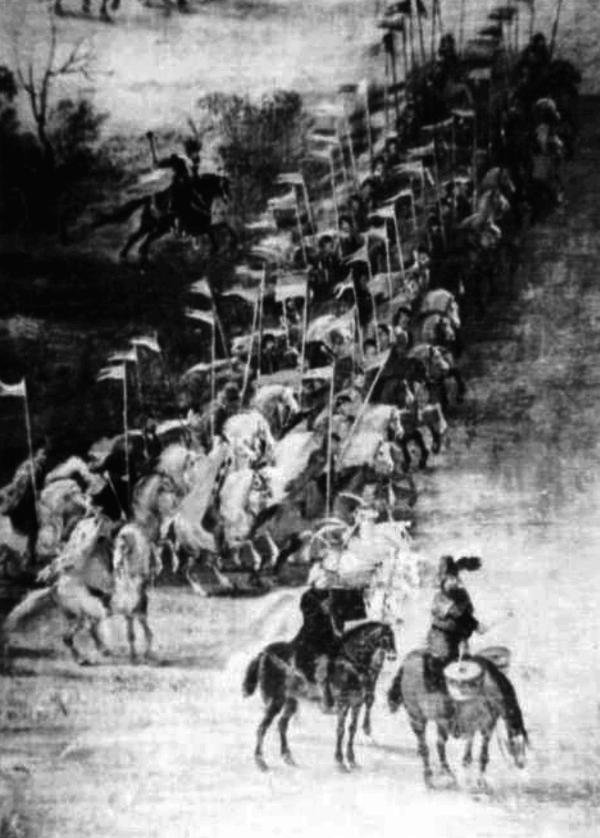 An hussar formation, made up of several 'banners', prepares to charge into the Swedish lines at Kircholm (1605). In front is a group of unarmoured musicians, behind an officer with a mace. From the 'Battle of Kircholm' painting by an unknown artist of the early 17th century. (Chateau de Sassenage)

The command of the armed forces of both Poland and Lithuania was ultimately in the hands of the king. He appointed for life the commanders of the army: the Grand Hetman of the Crown, the Field Hetman of the drown, and similar posts in the Lithuanian army. The Field Hetman was only marginally inferior to the Grand Hetman, his main duty being to look after the standing army.