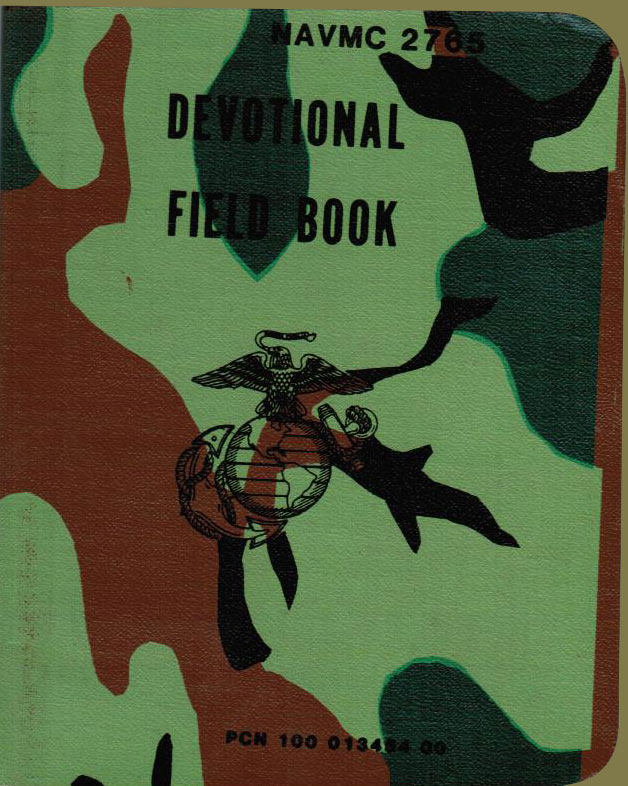 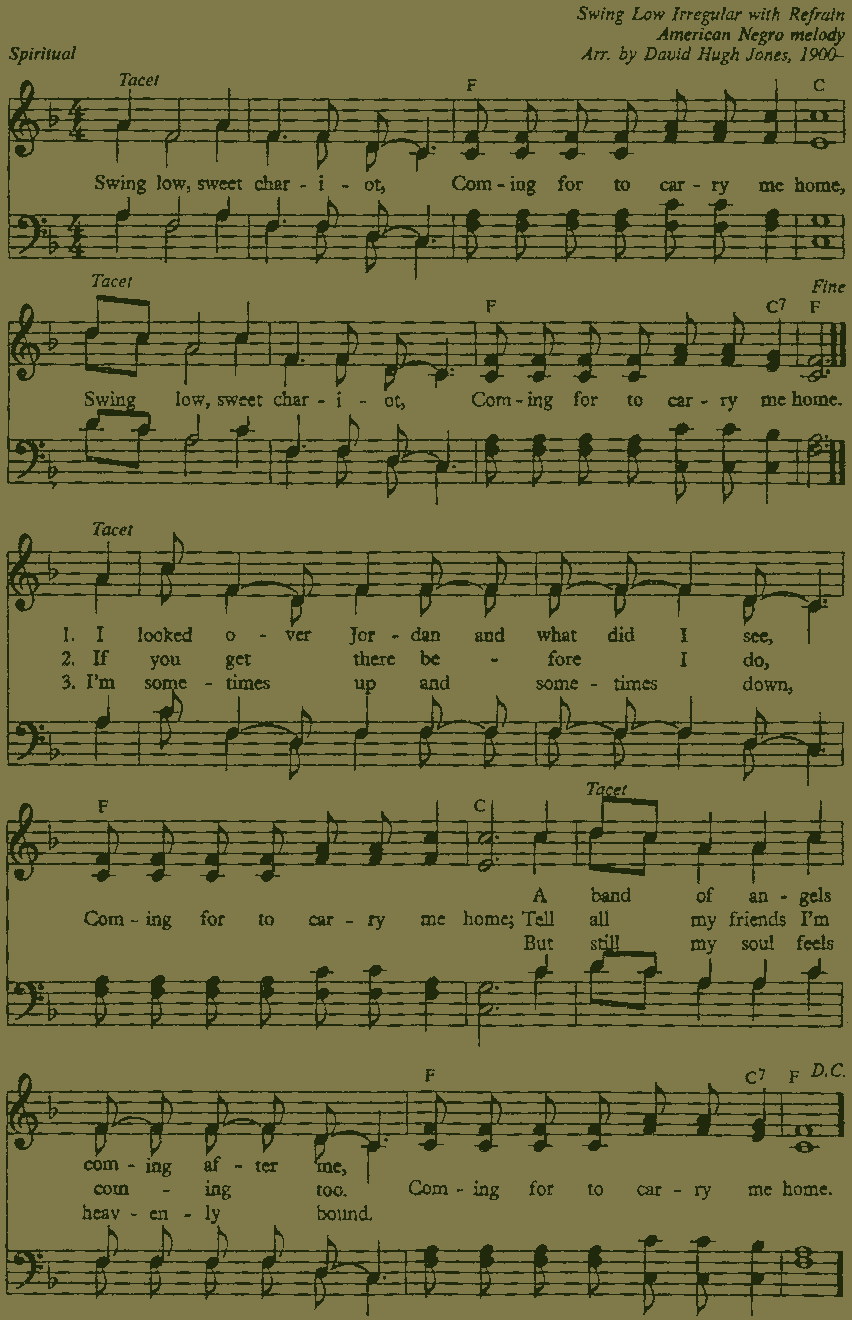 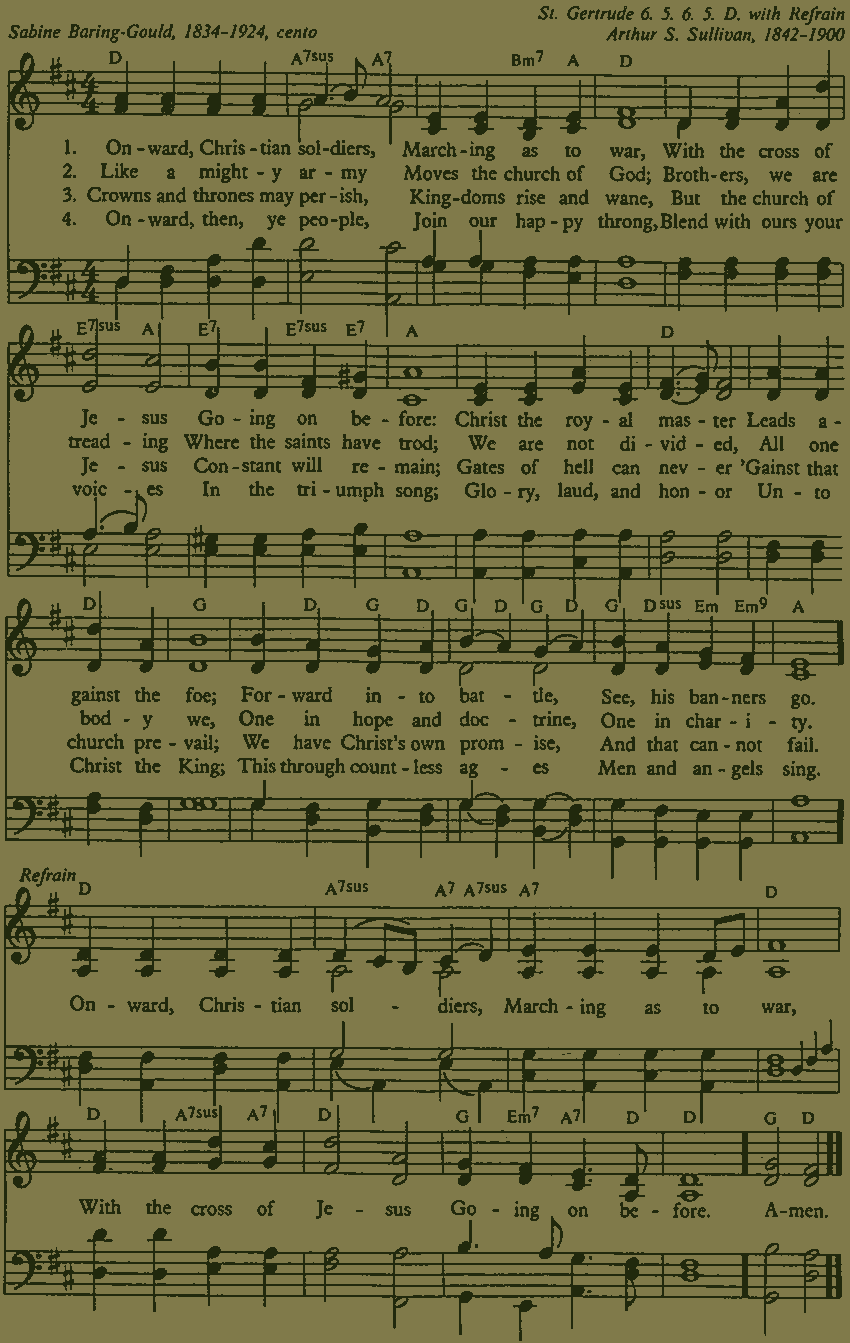 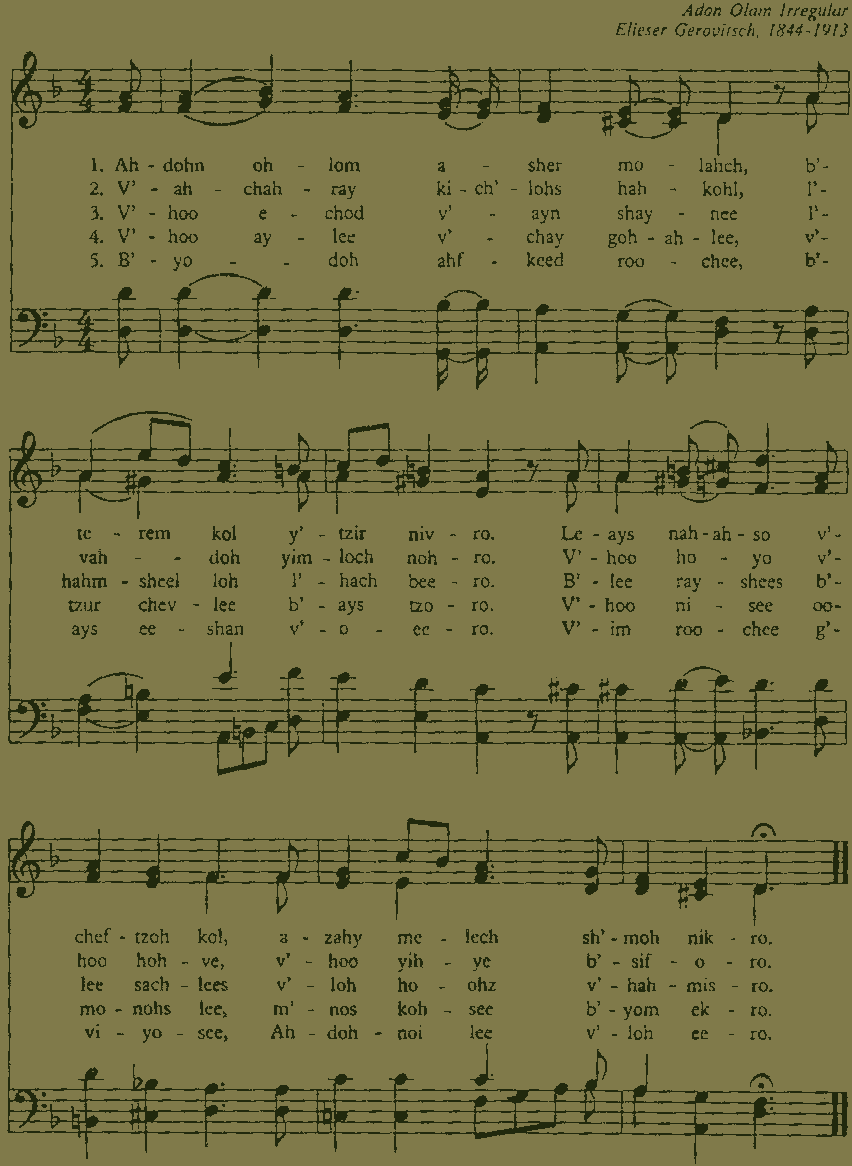 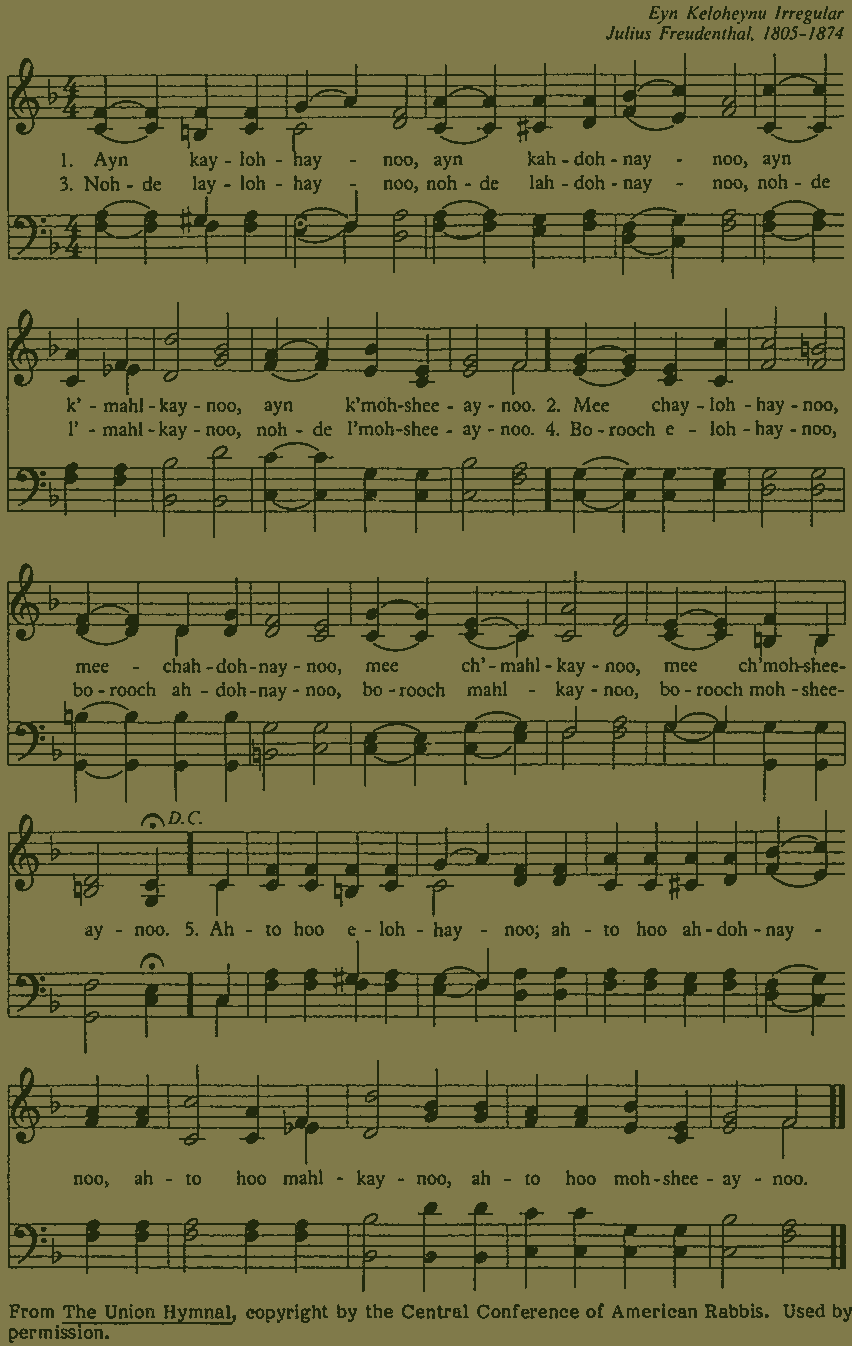 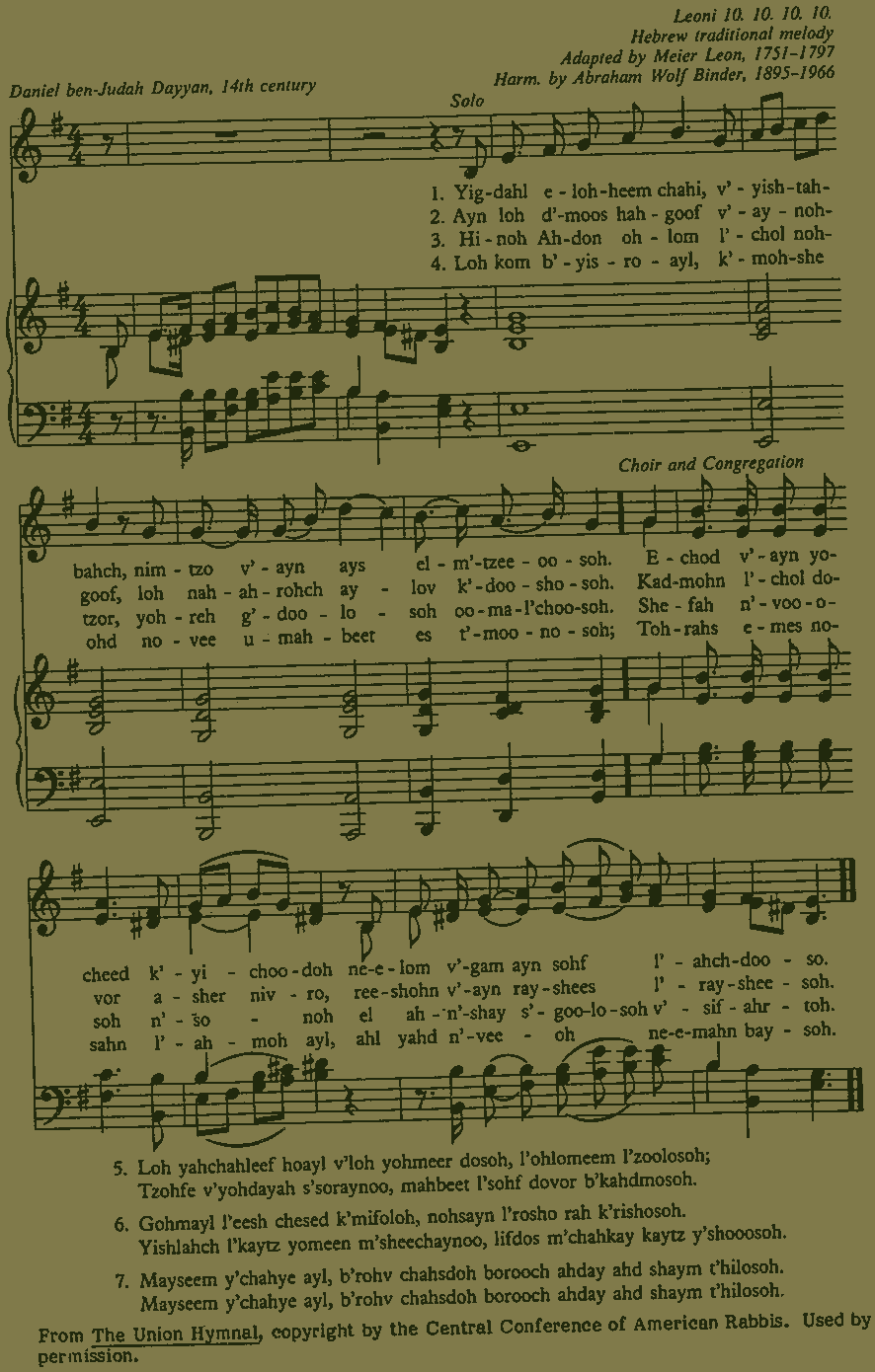 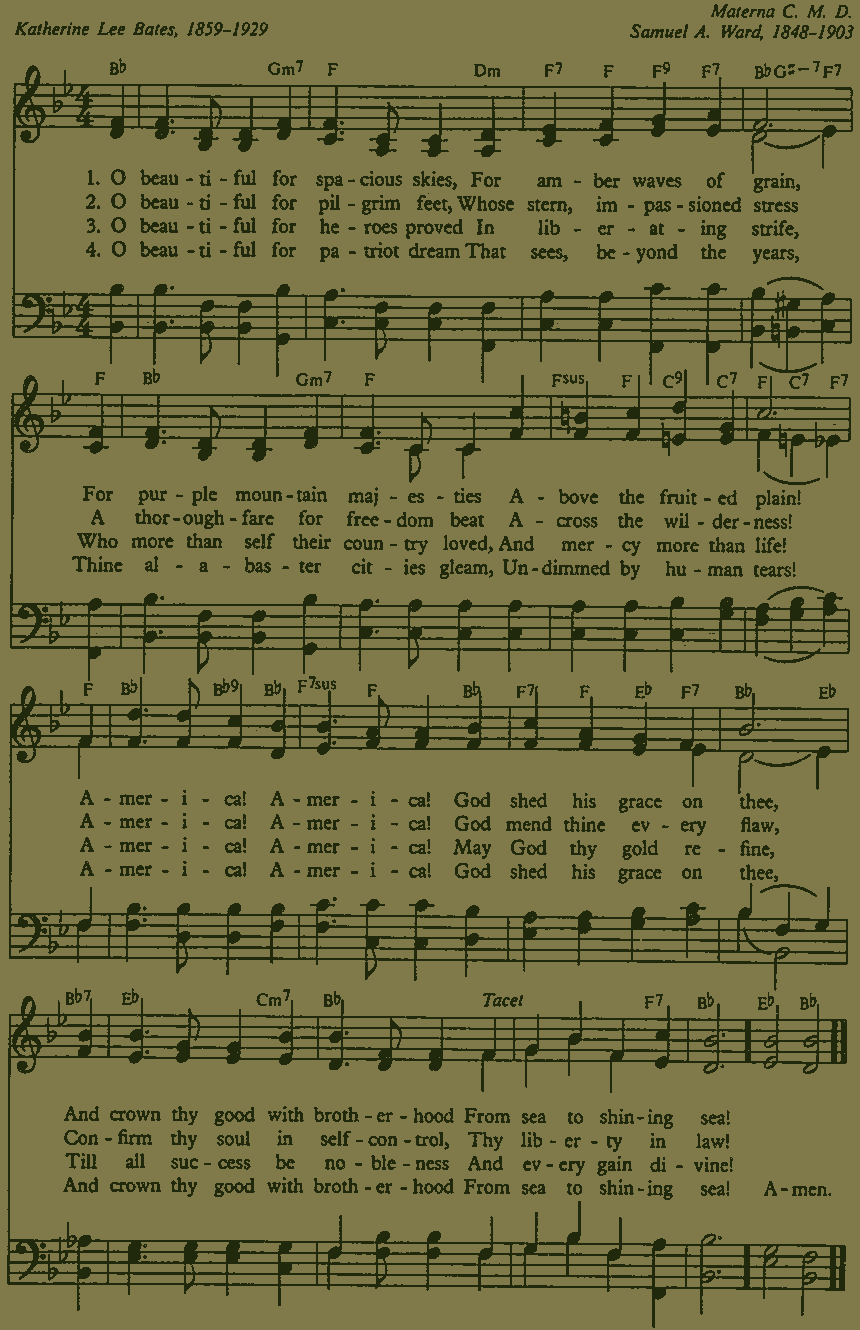 Mine Eyes Have Seen the Glory

Eternal Father, Strong to Save 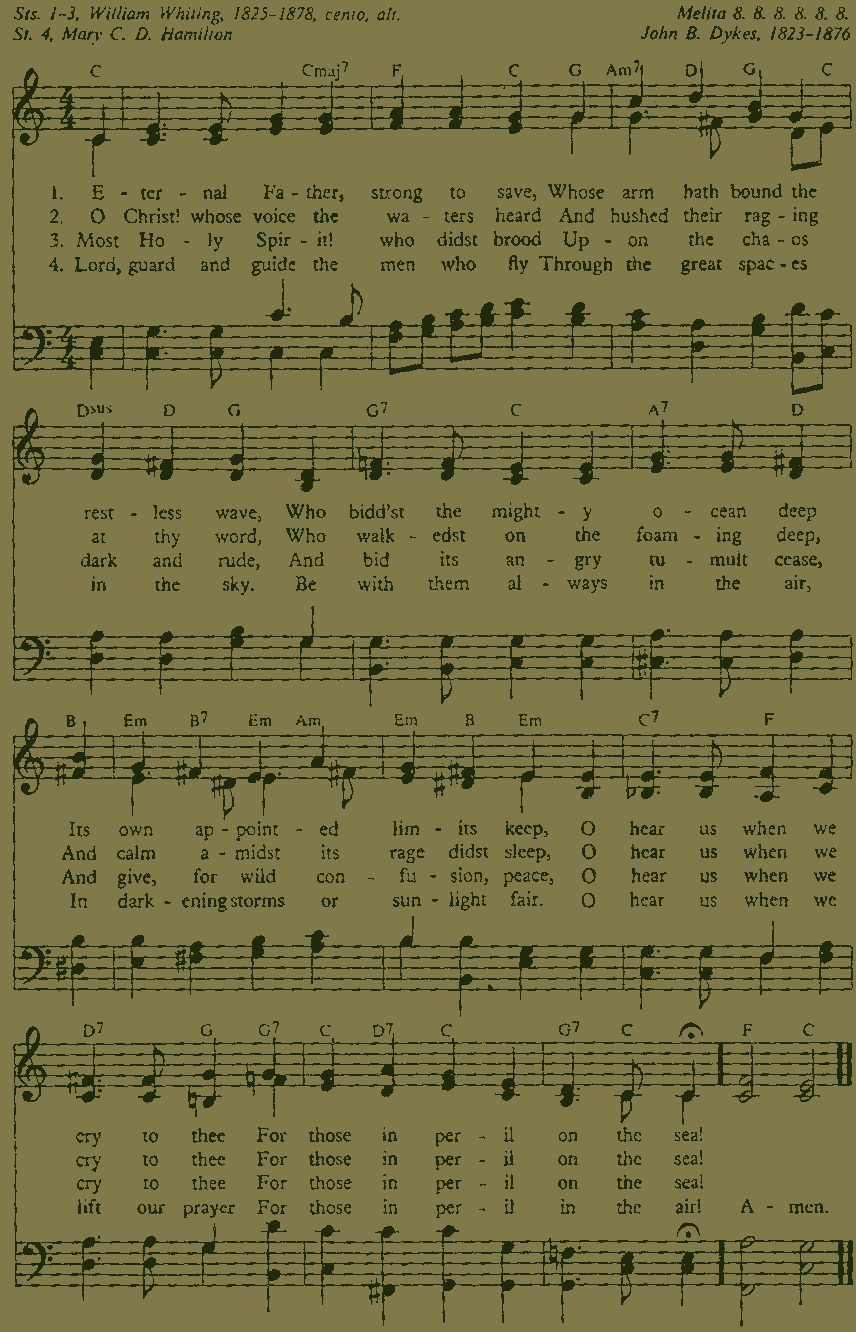 To all Marines, both night and day,

The courage, honor, strength, and skill,

Their land to serve, Thy law fulfill;

Be thou the shield forevermore,

From every peril to the Corps.

I believe in God, the Fathe'r Almighty, creator of heaven and earth. I believe in Jesus Christ, his only Son, our Lord. He was conceived by the power of the Holy Spirit and born of the Virgin Mary. He suffered under Pontius Pilate, was crucified, died and was buried. He decended to the dead. On the third day he rose again. He ascended into heaven, and is seated at the right hand of the Father. He will come again to judge the living and the dead. I believe in the Holy Spirit, the holy catholic church, the communion of saints, the forgiveness of sins, the resurrection of the body, and the life everlasting. Amen.

We believe in one God, the Father, the Almighty, maker of heaven and earth, of all that is seen and unseen. We believe in one Lord, Jesus Christ, the only Son of God, eternally begotten of the Father, God from God, Light from Light, true God from true God, begotten, not made, one in being with the Father. Through him all things were made. For us men and for our salvation he came down from heaven: by the power of the Holy Spirit he was born of the Virgin Mary, and became man. For our sake he was crucified under Pontius Pilate; he suffered, died and was buried. On the third day, he rose again in fulfillment of the Scriptures: he ascended into heaven and is seated at the right hand of the Father. He will come again in glory to judge the living and the dead, and his kingdom will have no end.

We believe in the Holy Spirit, the Lord, the giver of life, who proceeds from the Father and the Son. With the Father and the Son he is worshipped and glorified. He has spoken through the Prophets. We believe in one holy catholic and apostolic Church. We acknowledge one baptism for the forgiveness of sins. We look for the resurrection of the dead, and the life of the world to come. Amen.

These meditative thoughts are offered for consideration in your devotional life. It is recommended that you read them prayerfully, asking God to assist you in understanding the spiritual truths they contain. As you read these meditations think about how they can be applied to your life. Finally, ask God to help you in allowing these truths to become part of your life.

O Lord, Thou knowest how busy I must be this day. If I forget Thee, do not Thou forget me.

Character is like a tree and reputation like its shadow. The shadow is what we think of it; the tree is the real thing.

Courage is the power to let go of the familiar.

We only think when we are confronted with a problem.

The great use of life is to spend it for something that outlasts us.

All that is essential for the triumph of evil is that good men do nothing.

One man can make a difference - every man should try.

Too often we expect people to hear what we mean, not what we say. Anonymous

I believe in the sun even when it is not shining.

I believe in love even when not feeling it.

I believe in God even when He is silent.

(Inscription in a Cologne cellar where Jews hid in time of persecution.)

O God our Father let us not be content to wait and see what will happen. Give us the determination to make the right things happen.

He that is good for making excuses, is seldom good for anything else.

An ounce of fact means more than a ton of argument.

Forgetfulness is a virtue only when you forget the grievances you have against other people.

One asks, what will happen to me? Another, what is right? And this is the difference between the slave and the free man.

Live with men as if God saw you; converse with God as if men heard you.

A bad habit is first a caller, then a guest, and at last a master.

Hatred is like an acid; it can do more damage to the container in which it is stored that to the object on which it is poured.

Home is the definition of what I am and who I am.

There is no end to the good which one can do if he does not care who gets the credit.

He who cannot laugh at himself appears ridiculous.

The trouble with most people these days is that they want to reach the Promised Land without going through the wilderness.

No man is free until he's free from the fear of death.

I expect to pass through this world but once; any good thing therefore that I can do, or any kindness that I can show to any fellow creature, let me do it now; let me not defer or neglect it, for I shall not pass this way again. Stephen Greenlet

The longest journey is the journey inward.

After crosses and losses men grow humbler and wiser.

The secret of life is not to do what one likes, but to try to like what one has to do.

Life is like an onion, you peel off one layer at a time and sometimes you weep.

Lives are made of chapters; after one is written it cannot be revised, but we can write a new chapter with each new day.

Life is like a camel. You can make it do anything except back up.

Life, if you know how to use it, is long enough.

Only those who learn how to live with loneliness can come to know themselves and life.

You can't hold a man down without staying down with him.

To act coolly, intelligently, and prudently in perilous circumstance is the test of a man and also a nation.

One of the biggest mistakes most of us make is to fear that we will make one.

I am but one, but I am one; I cannot do much, but I can do something; which I can do I ought to do; and what I ought to do, by the grace of God I will do.

One thing I know, the only ones among you who will be really happy are those who will have sought and found how to serve.

O Lord help my words to be gracious and tender today, for tomorrow I may have to eat them.

Success is to be measured not so much by the position that one has reached in life as by the obstacles which he has overcome while trying to succeed.

We often regret our speech but seldom our silence.

We live in the present, we dream of the future, but we learn from eternal truths from the past.

The man who does not habitually worship is but a pair of spectacles behind which there is no eye.

You can't find many success rules that'll work unless you do.

When faced with a mountain, I WILL NOT QUIT! I will keep on triving until I climb over, find a pass through, tunnel underneath or imply stay and turn the mountain into a gold mine with God's help.