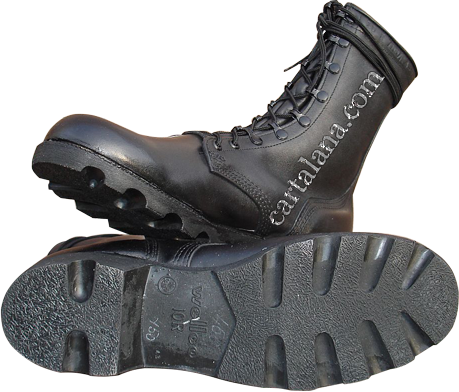 The US "Combat Boots, Mildew & Water Resistant, Direct Molded Sole (DMS)" were used by the US Armed Forces for about 20 years, from 1984 to 2004, when the United States Army transitioned from M81 Battle Dress Uniform (BDU) and Desert Camouflage Uniform (DCU) worn in the 1980s - 1990s, to the current US Army Combat Uniform (ACU) and Flame-Resistant Army Combat Uniform (FRACU - flame-retardant variant of the ACU). 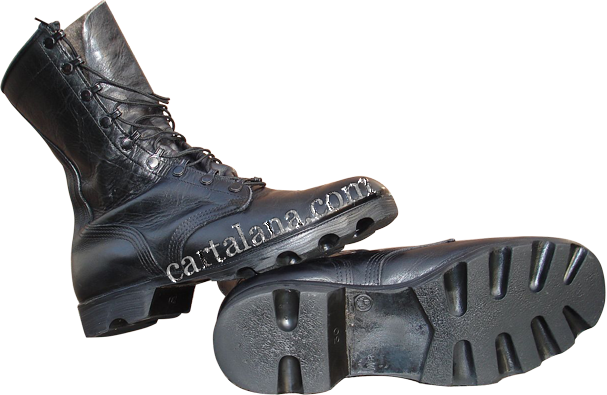 Along with new uniform, different branches introduced more practical, non-shine rough-out leather combat boots of different color shades (tan, coyote, sage green etc.) according to their own requirements and specifications. This left the black leather shine boots behind, and wearing of any black combat boots is generally not authorized with the currently used uniform, with the exception of some cases (safety boots, cadet's parade footwear in conjunction with the BDU...etc.). 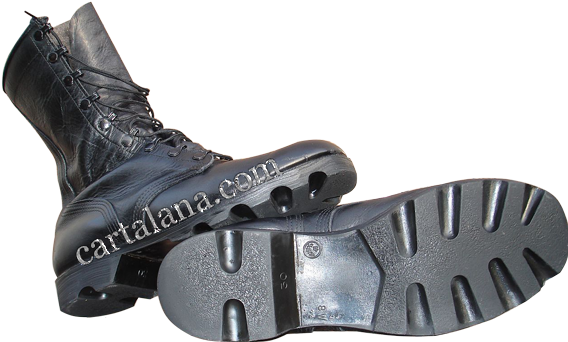 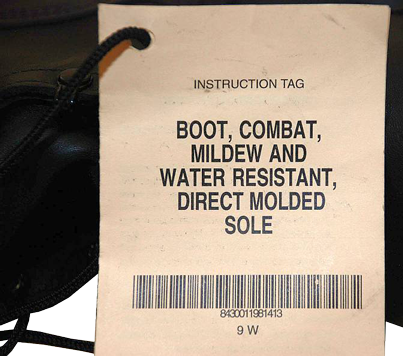 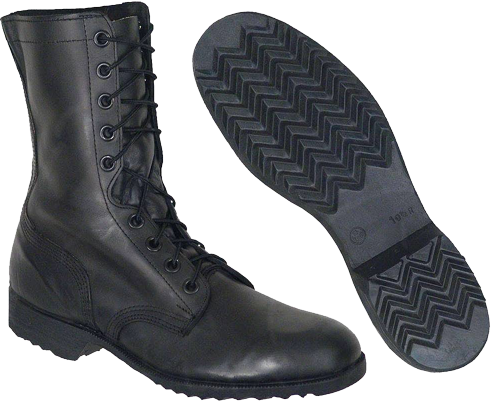 Military specification of these boots, MIL-B-43481, was finally canceled in the year 1990. These boots were a kind of Direct Molded Sole boots, similarly to the previously designed and specified US "jungle" boots. US Army Black Leather Combat Boots featured nine pairs of simple round eyelets (four pairs of eyelets at the foot and five pairs in the upper part of lacing), subdivided by a dent-shaped cutout. The first specification made provisions for ten pairs of eyelets. 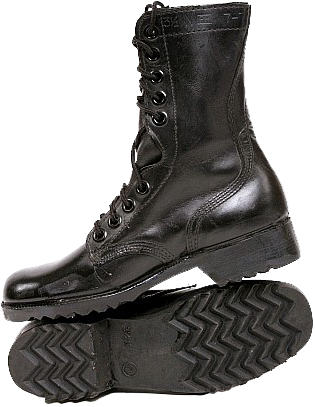 The size and widths information, as well as manufacturer's code (contractors initials) and the date of production are hot-press stamped into the leather around the top cuff of the boot (on the inner sides of the padding "collar" of the boot's upper). There were eleven size options (American sizing), each of them had five width options. The width is indicated as an abbreviation, for each size there were provided the following widths: XN (Extra Narrow), N (Narrow), R (Regular), W (Wide) and XW (Extra Wide). 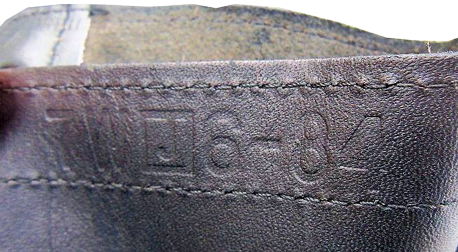 On the Figure 7 one can see an example of stamping for "Boots, Combat, Direct Molded Sole":

- "J" is the code of Contractor-manufacturer ("Belleville Boot Company")

Although these boots were copied (more or less exactly) by the Armed Forces of such countries as Israel, Norway and Greece, the users of these boots revealed some weak points:

- too thin but rigid out-sole (uncomfortable for long walks);

- shallow "chevron"-type tread pattern provided not the best adherence with most surfaces; 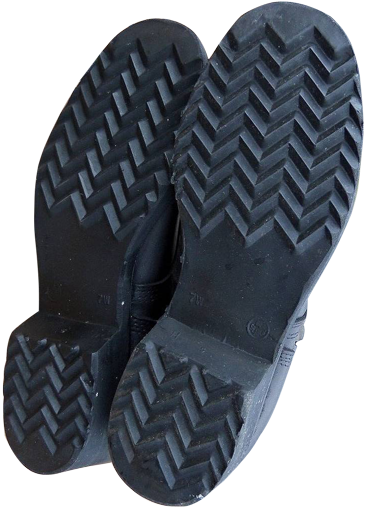 - absence of soft padding "collar" on top, preventing the ingress of water, dust and small pebbles inside the boots;

- the boot's tongue was not stitched high to the boot's top, so the upper half of the lacing was not protected from water ingress;

- the lacing system was conventional, with simple round eyelets, not "speed-lace". 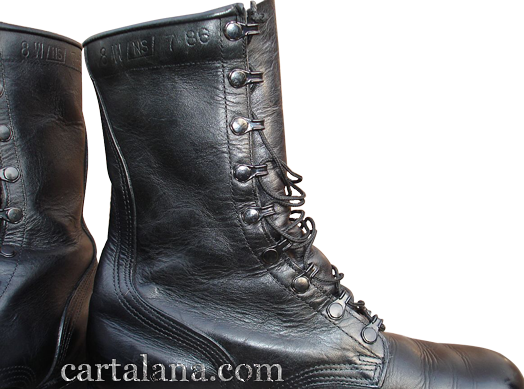 All these matters were improved in the framework of new military specification MIL-B-44152 of October 30, 1984 for the so called "Boots, Combat; Mildew & Water Resistant, Direct Molded Sole". These boots were developed in the beginning of 1980s by the famous American "Natick Lab" (Research, Development and Engineering Center, located in Natick, Massachusetts), according to US Army and US Marine Corps demands and requirements. 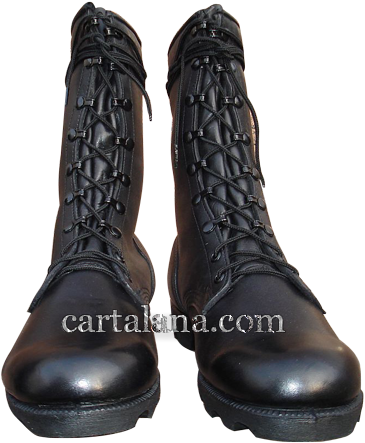 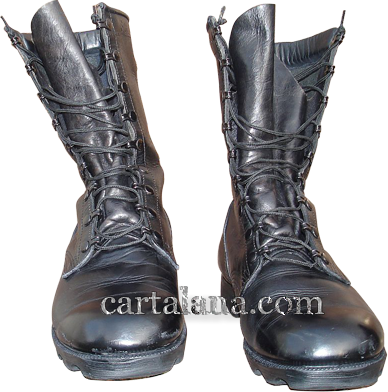 The early boots made by the specification MIL-B-44152 featured separately attached out-soles and heels: the sole was direct molded to the upper, and the heels were glued to the soles. On May 28, 1993 the specification was revised, and according to Rev C (Revision C, i.e. MIL-B-44152C) the boots already featured one-piece sole and heel, direct molded to the upper. The lacing system was modified as well. 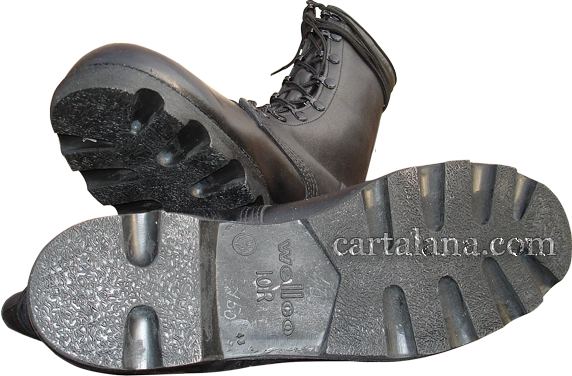 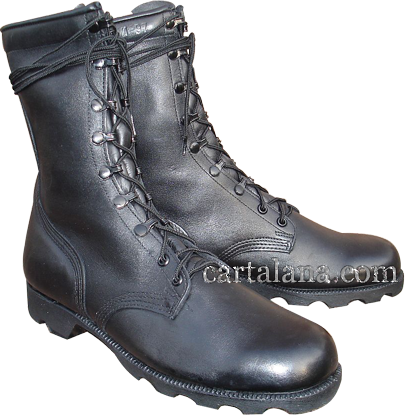 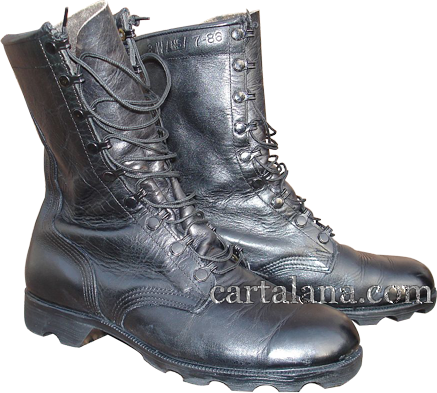 New deep lug out-soles design resembles the tread pattern of tires, which were used in different military transport vehicles, jeeps and trucks, and even on the wheels of howitzers. 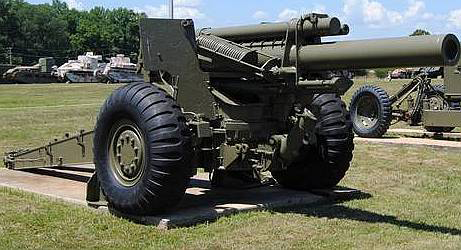 On the Figures 19-20 one can see the examples of the aforementioned US speed-lace boots, the early version (with non-integral out-sole) 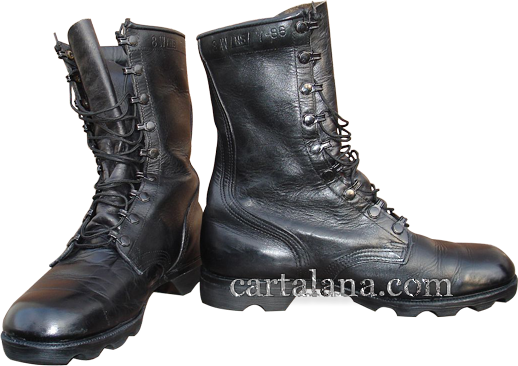 and later version (with cast out-sole and manufacturer's name indicated on the sole - Wellco). 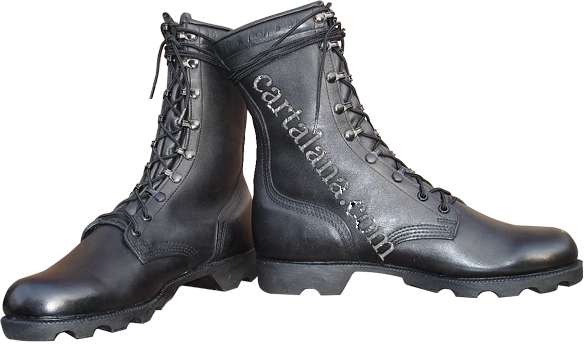 The soles of the early boots even show thin lined bars, which serve the reference points for precise heel attachment. The later revised version boots are single-cast and lacks these marks. 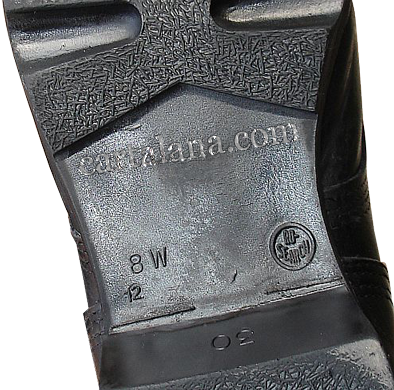 The both version of the boots have round-shaped "Ro-Search" logo on every sole. The presence and accuracy of this logo are the indicators of the original boots, the copy-cats usually unable to make exact and accurate stamp, because the quality of the out-soles can be achieved only with expensive DMS footwear manufacturing equipment. The manufacturers of fakes for these boots usually produce boots with not DMS soles, but with usual rubber soles, simply glued to the boot's top. 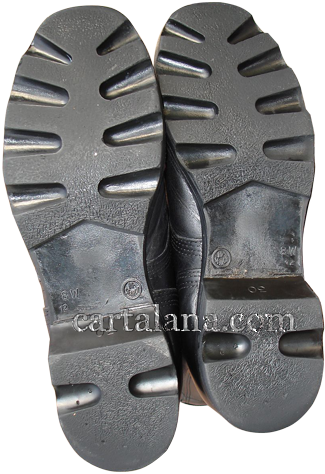 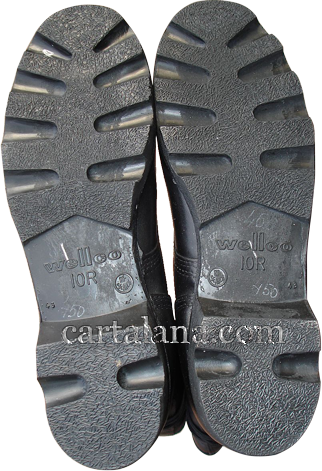 The fakes (with rough imitations of out-sole marking) last not long, their deterioration usually starts from the heel leather rupture, or the out-soles just fall apart. 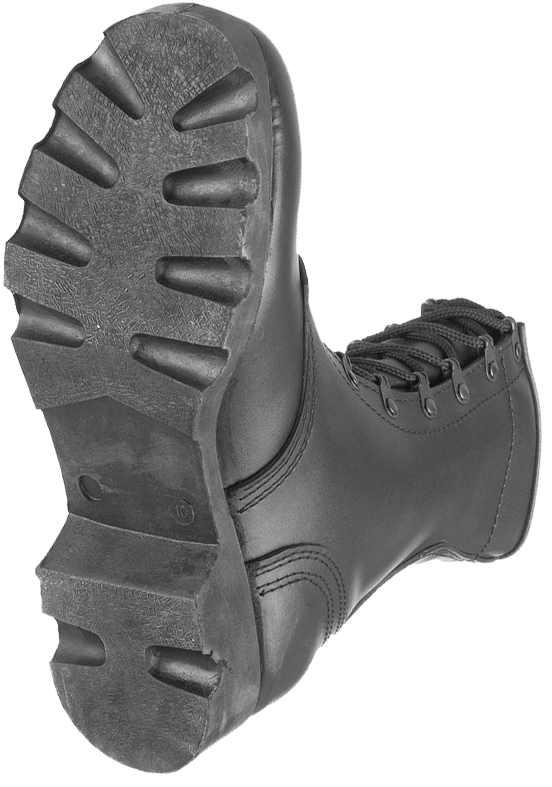 Similarly to the late version of previous model, specified by MIL-B-43481 (the so-called "Boots, Combat, Direct Molded Sole"), the heel caps (counters) of the boots by MIL-B-44152 go up the back of the boots, the rear side is reinforced by stitching. 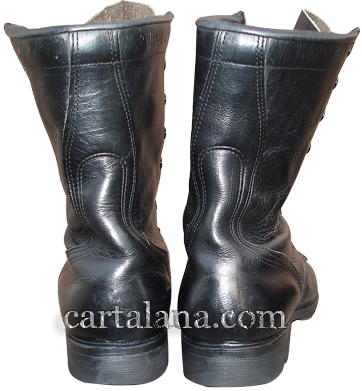 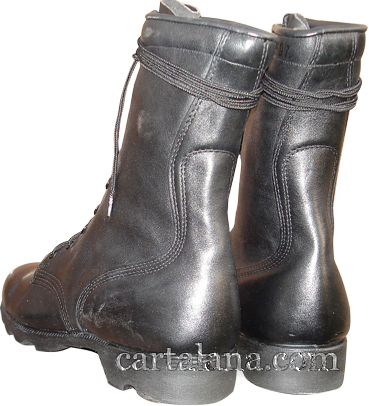 The previous "Combat Boots, Direct Molded Sole" (MIL-B-43481) were issued with removable orange-coloured plastic mesh insoles, as it was in the US Army boots of the 1960-70 and US "jungle boots". The same design green mesh insoles were used in contemporary German Bundeswehr military boots, prior to Modell 2000 army boots. 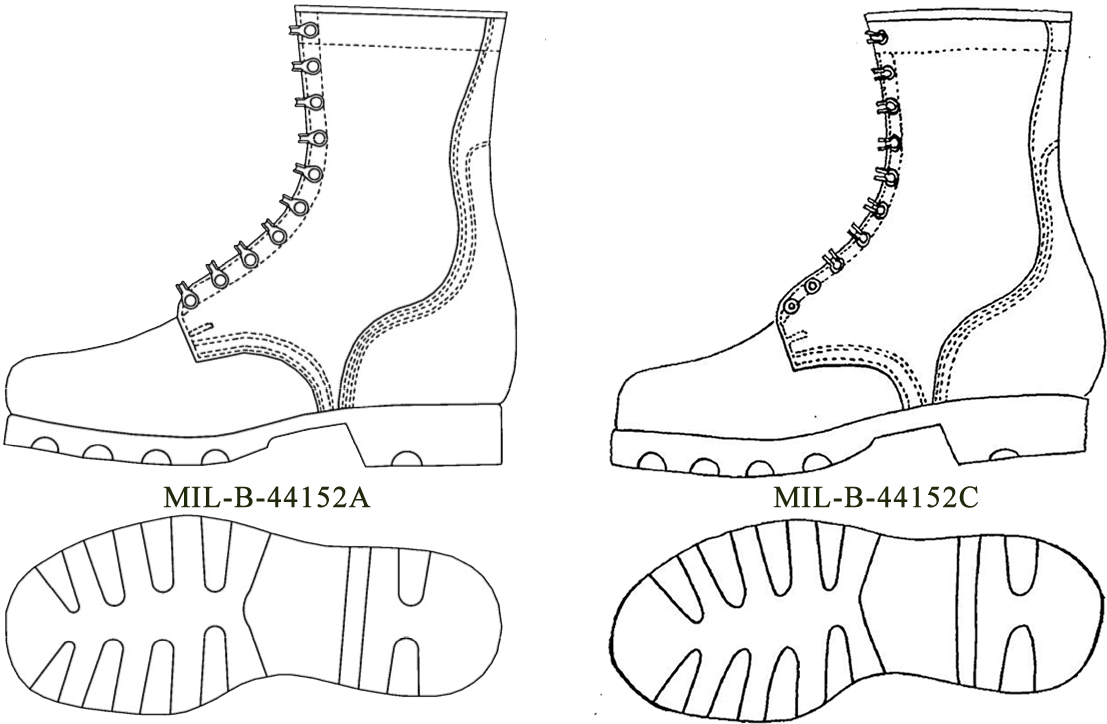 There were three versions (and one amendment) of military specification MIL-B-44152 by dates: 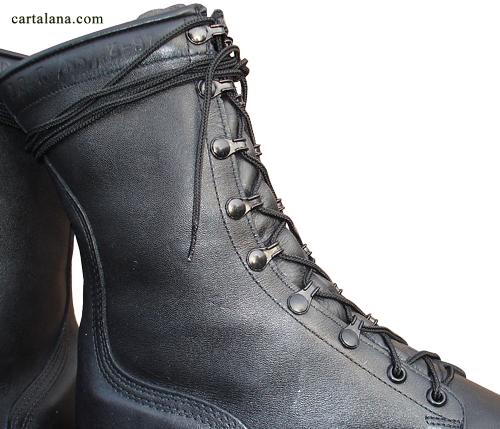 The size and widths information, the manufacturer's code (contractors initials) and the date of production are hot-press stamped into the leather around the top cuff of the boot (on the inner sides of the padding "collar" of the boot's upper). There were sizes for women and men, from 3 to 14 (American sizing), each of them had five width options: XN, N, R, W and XW.

On the Figures 30-31 one can see examples of stamping for the US Mildew & Water Resistant Black Combat Boots:

Among the other examples of US Armed Forces Contracted footwear manufacturers codes, one can't help mentioning such respectful company as "Altama" (code "PJ"), founded in 1969 in Darien, Georgia. On the stamp one can see: 11W /PJ/ 4-97 - size 11 Wide, manufactured in April 1997.

"Wellco" and "Altama" are among the best footwear research, develop and manufacturing companies, which were contracted suppliers of the US Ministry of Defense for decades. Since mid-August, 2014, these companies are a part of their new owner - "Original Footwear" company, which also purchased most assets of "Tactical Holdings and Operations Inc".