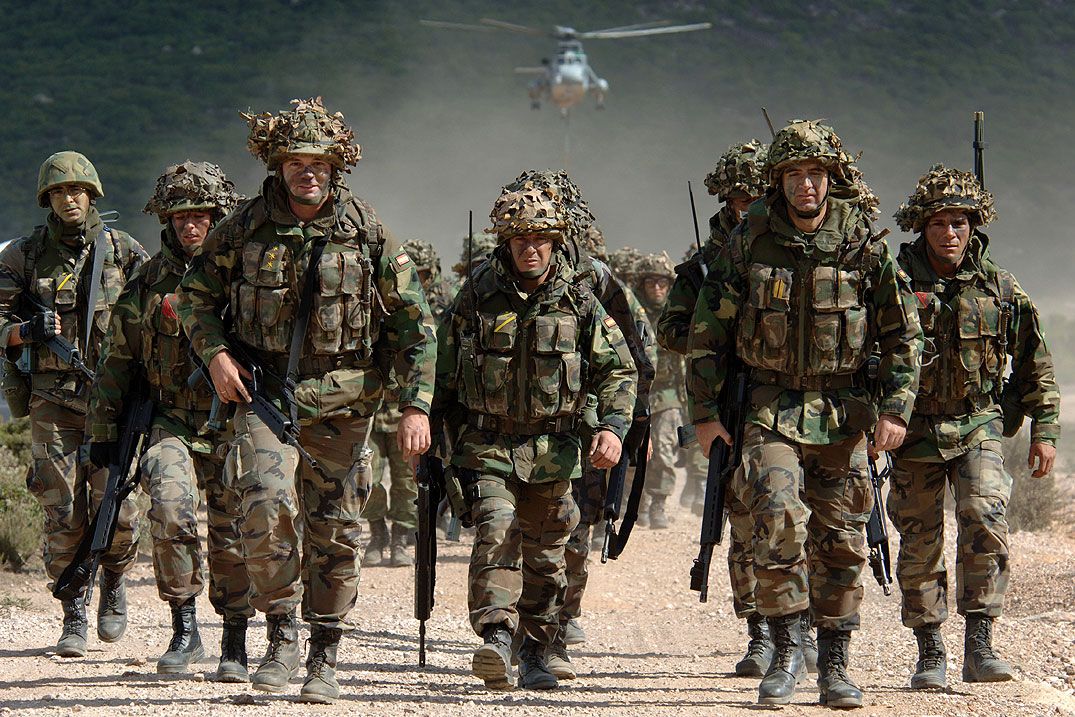 A big Spanish manufacturer of the boots - "ITURRI Group" was founded in 1947 by Juan Iturri Landajo as a company, dedicated to marine goods and cables, in the port of Seville. In the 1960s the business was transformed into an industrial and commercial group with a clear focus on customer service. During the 1970s the company operations expanded considerably throughout Spain (14 cities).

"Iturri" was a pioneer in the centralized supply of safety equipment and came its way from supplier to developer and manufacturer of its own products.

Their areas of activities included commercialization, design, manufacture, maintenance, leasing and distribution of all kinds of special industrial vehicles and, in particular, firefighters vehicles, cleaning, ambulances, rescue, civil protection, emergencies, rescue in height, as well as retail sale of clothing and footwear in specialized stores.

What about military footwear, the center for production and logistics is situated in Huelva, Spain (Cra. Circunvalación 19. 21700 La Palma del Condado), while the uniform and apparel is manufactured in Tánger, Morocco ( P.I. Mghogha, Carretera de Tetuán c/ 2, 64. 9000).

By the outlook appearance, these Spanish combat boots look similar to the Military boots of the Netherlands - Model M90 (M400): they feature wide soft cushioned collar on the top edges of the boots, smooth and thick black leather (soft and hydrophobic), they also have straight-lined leather strap covering the rear side of the boots and the heel counter. 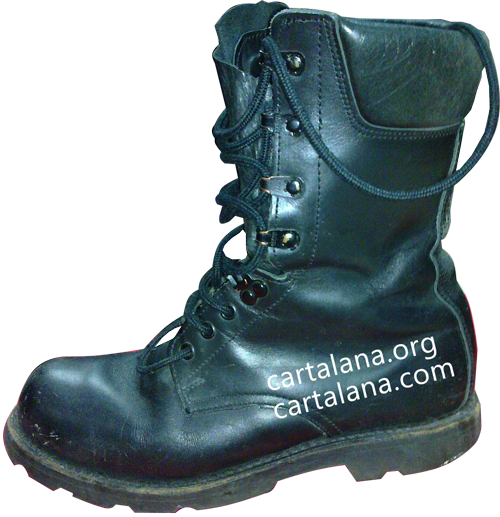 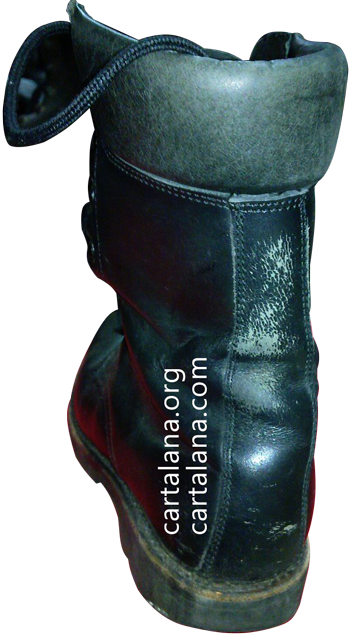 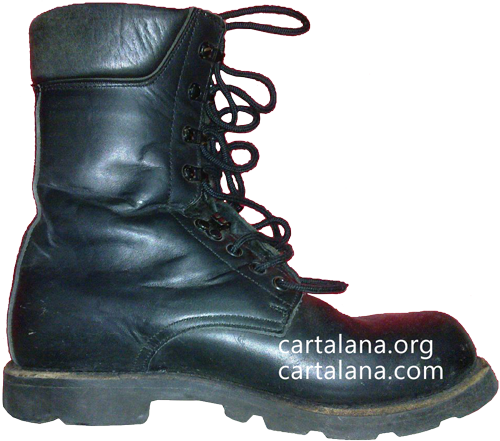 The rubber out-sole is glued to the thick leather mid-sole, which, in turn, is glued and stitched to boot's top (Goodyear welted construction).

The laing system is quite comfortable in use and consists of three pairs of simple round eyelets in the bottom, hook-clamp for fastening the laces and four pairs of speed-lace eyelets. The soft leather boot's tongue is padded as well and is stitched high almost to the upper side of the boot's top. 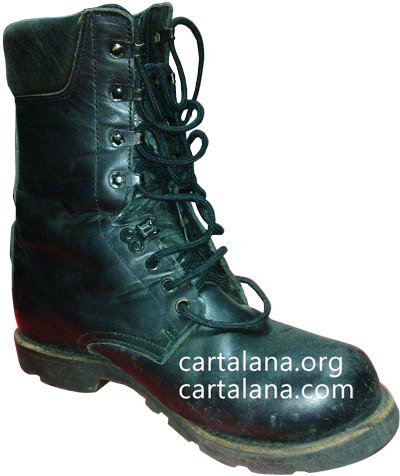 The speed-lacing eyelets are made of rust-less metal (brass) and bear the marking of the manufacturer (ITURRI). The lases are round-shaped in section and are made of reinforced double-layer nylon. 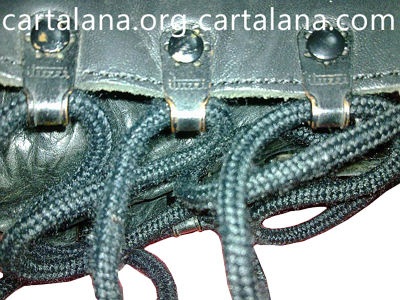 The inside of these boots are lined with yellow-colored smooth "glove"-leather, providing comfortable wear and absence of blisters (if the boot size was chosen correctly). The black-colored inner lining of the boot's tongue bears the manufacturer's name ("Iturri"). 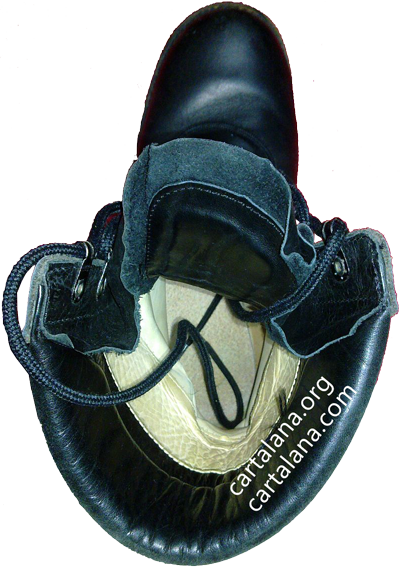 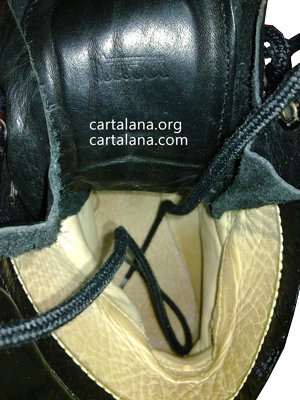 The out-sole tread pattern is an original Spanish version of the well-known American "Panama" sole, typical for modern black boots of the country's Armed Forces. The marking of the out-sole shows the manufacturer's name ("Iturri"), the name of it's innovative technology, "FORMULA ABRAX", which was implemented in the boots out-soles, the size in European metrics (Talla No. 40), and size and width in Mondopoint system (262-88). 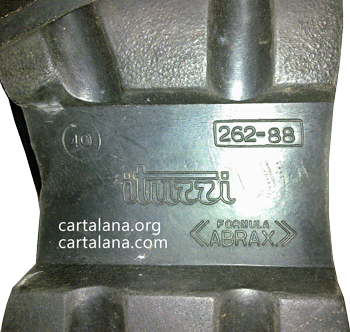 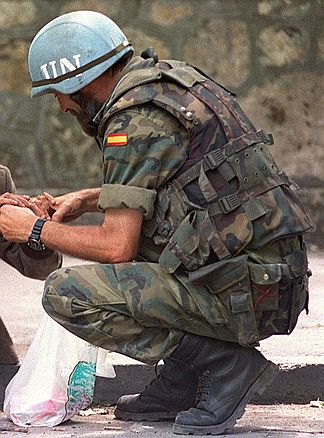 According to the information, kindly provided by Mr. Oscar Velázquez, an active member of the Spanish Civil Guard, the currently used boots are made by three manufacturers: FAL, ROBUSTA and ITURRI. These boots proved to be very good, comfortable and functional.

Let's consider the boots manufactured by FAL, a Spanish company, specialized in production of professional footwear.

The boot's top is made of breathable and hydrophobic materials - leather and heavy-duty, cut-resistant Cordura, and features "GORE-TEX" breathable waterproof membrane. The outsole with high non-slip coefficient is made of hard rubber (vulcanized elastomer) and the polyurethane midsole provides more comfort. The out-sole tread pattern is designed to fit all types of terrain. The lacing system consists of nine pairs of speed-lacing eyelets and a pair of hook clamps for keeping the high resistance waterproof laces in proper position.

The Spanish Police Intervention Units (anti-riot units) of the National Police boots are currently provided with the so-called "Bota U.I.P.", as Mr. Oscar Velázquez (Spanish Civil Guard) informs. These boots are made of high quality breathable, yet hydrophobic leather. Double density polyurethane sole is lightweight and flexible, and these boots are recommended for urban service. U.I.P. boots feature "GORE-TEX" breathable waterproof membrane, and the laces are made of waterproof cords, highly resistant to tear and wear. The lacing system consists of eight pairs of speed-lacing eyelets.

"Bota Nervión" are the boots, currently used by the Autonomous Police of the Basque Country (the Ertzaintza), Mr. Oscar Velázquez from Spanish Civil Guard has informed. These police boots are made of combined materials - high-quality leather and fire retardant, meta-aramid material developed by DuPont company back in the 1960-s.

Compared with the more familiar nylon, nomex (a meta-aramid polymer) is more solid and durable, however, in terms of mechanical properties and strength, nomex is inferior to Kevlar (para-aramid polymer). However nomex is characterized by excellent thermal, chemical, and radiation resistance and is widely used in creation clothing and equipment that can withstand intense heat and intended for firemen, military, space technologies, etc.

The lacing system consists of seven pairs of simple round eyelets and a pair of hook clamps for keeping the high-strength, water-resistant and flame retardant laces in proper position. 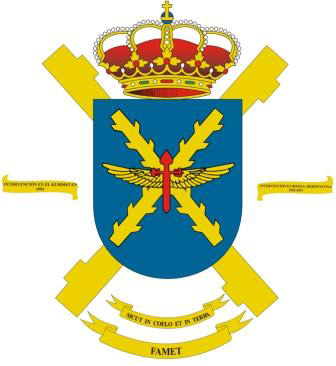 The Aeromobile (Helicopter) Force of the Spanish Terrestrial Army (FAMET) is an integral group of combat units, intended to provide combat and logistical support to them. These troops are placed under a single command to constitute operating organizations of variable entity and composition that in each case are determined according to the assigned mission, trained and equipped to carry out actions from the airspace close to the ground.

When classifying the aeromobile units operationally, there are three types of units in which the helicopters are the most important components:

These troops are composed of helicopter units of different characteristics (attack, reconnaissance, maneuver and transport) with specific logistical support and a command and control system integrated in the upper step .

The FAMET "vuelo" (i.e. "flight") boots are manufactured by the "FAL" company.

Founded in 1965 in Arnedo (La Rioja, Spain), the "Calzados FAL S.A." is one of the leading company in the manufacture and marketing of footwear under the brands "Chiruca" (sports, outdoor and hunting boots) and "FAL Seguridad" (work and safety footwear, professional footwear for military, firefighters and for state security forces).

The FAMET "vuelo" flight boots are actually desert boots, intended for hot and arid climate. They are made of high quality leather (suede) and fireproof, water-repellent and breathable textile, and feature "GORE-TEX®" membrane. Solid rubber "Vibram®" out-sole is designed to fit all types of terrain. 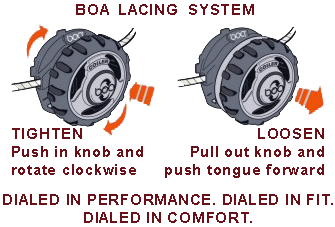 As found on the official "Boa®" system page, its founder, Gary Hammerslag, was looking for a quicker and easier way to tie his snowboard boots instead of laces. The cold and the gloves made the task of lacing and unlacing of the boots quite uncomfortable. It was back in 2001 when he patented this new system, which is currently present in all sectors, not only in sports and outdoor tourism, but also in safety boots, medical, firefighter's, military and security footwear, etc... 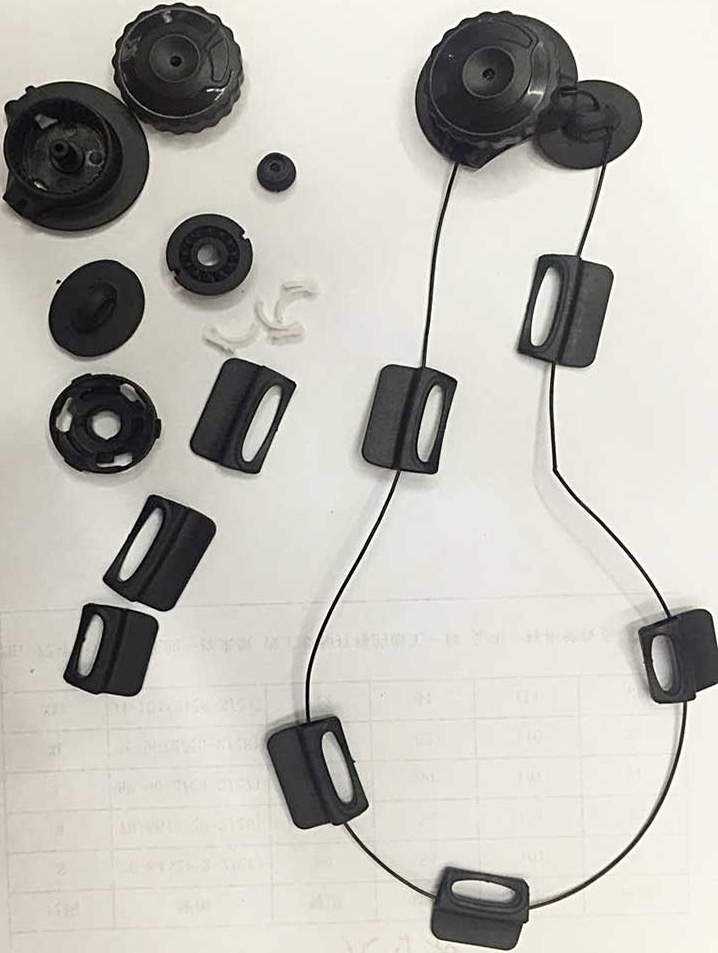 This patented system of on-the-fly adjustment consists of steel lace (made from aircraft-grade stainless steel), nylon guides and a mechanical reel. The main idea of this invention consists in overcoming multiple deficiencies found in traditional lacing systems. Actually, "Boa®" represent by itself the improvement in comparison with all the other closure system available on the market—from laces to buckles, zippers and magnetic fasteners, and ratchets to "Velcro®" (hook and loop) systems. 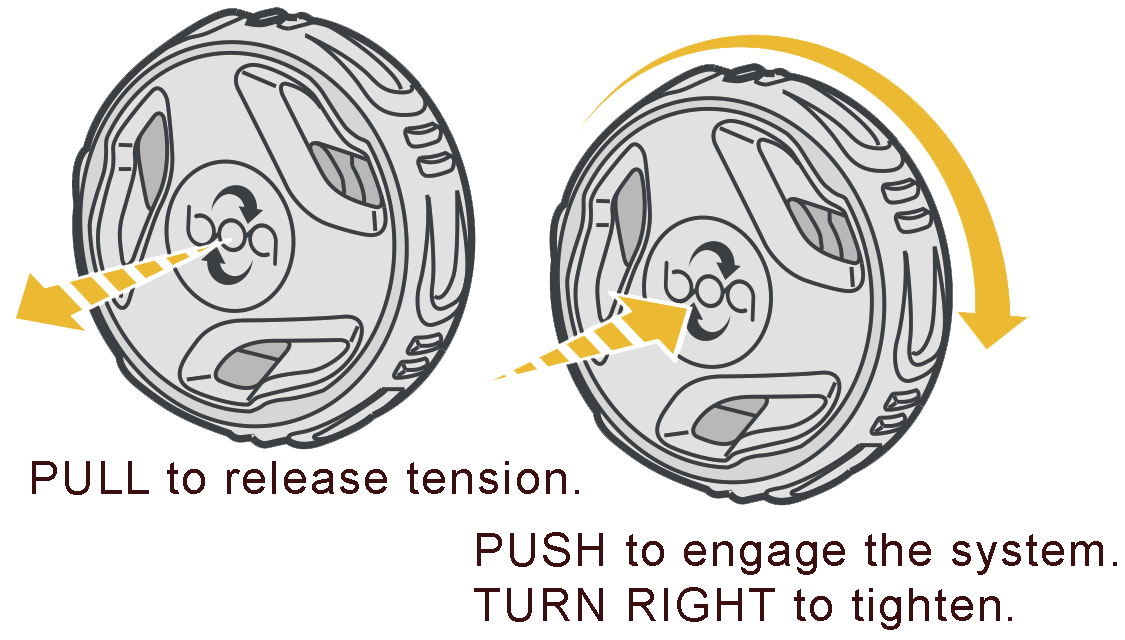 How does the "Boa®" system work?

With a simple turn of the wheel you can adjust the boots by setting the pressure that you consider appropriate and, best of all, keeping that pressure and holding stable throughout the time you use the boot during the day, exactly at the same pressure. The control is very simple: press and turn a control wheel that adjusts the braided cable of 49 steel wires. To loosen the boots simply move the wheel and the tab forward. 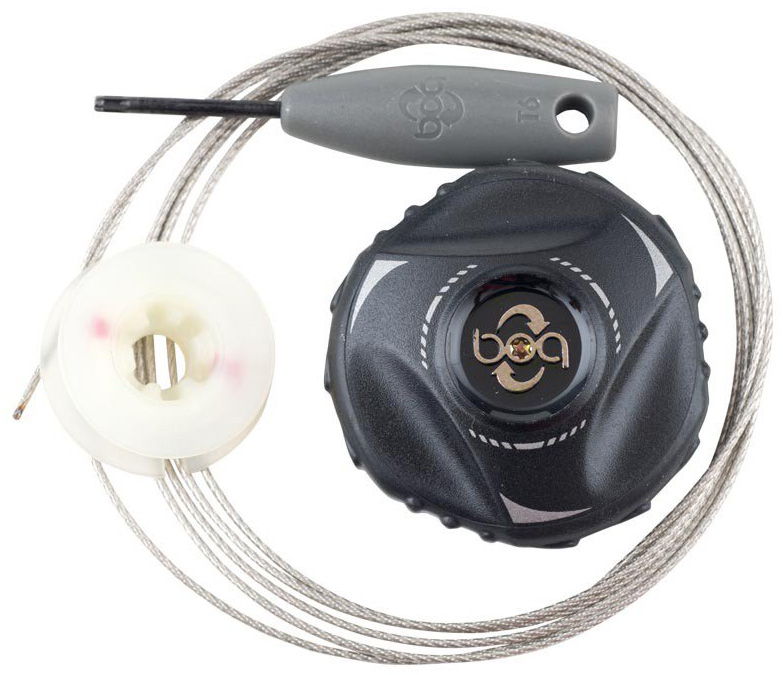 So, the boots equipped with "Boa®" closure system gives the following advantages:

- Absence of hanging shoe-laces to get caught in the rocks;

- Boa® closures provide a glove-like, precise fit with no pressure points and no slack, even with cold hands;

- Once locked into place, Boa® reels and laces stay that way all the time you need it;

- One can get a perfect fit with the simple turn of a knob, because "Boa®" reels offer seemingly infinite degrees of fine tuning for the most-comfortable fit;

- Comfort, durability, light weight, optimum pressure and a fast way to tie and release your boots on the fly, quickly and with one hand. 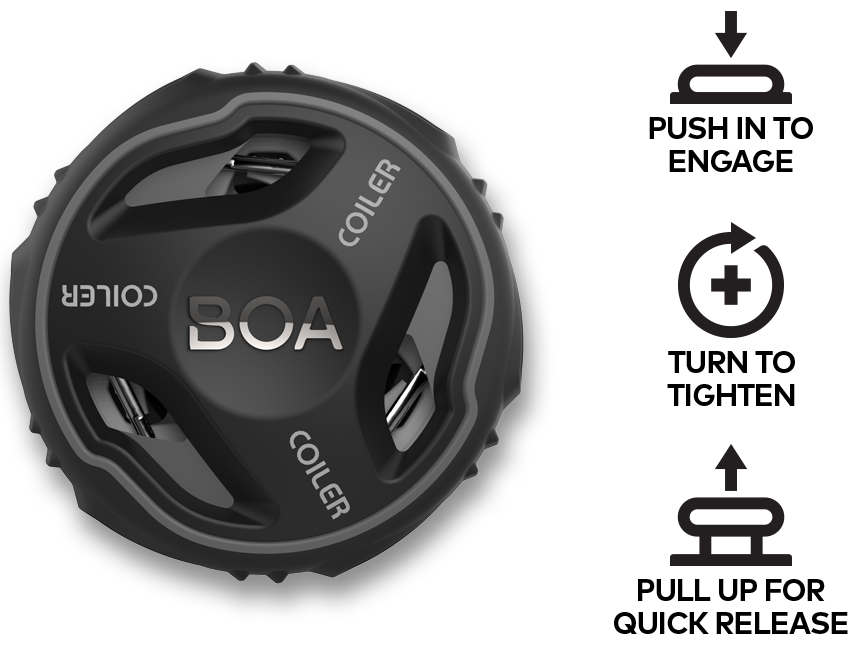 Sources of information and images:
"An approach to the footwear assembly automatic system" by R. Aracil, C. Balaguer, A. Barrientos and A. Yela from Departamento Automatica, E.T.S.I. Industriales (DISAM). Madrid, Spain.