The Spanish Armed Forces (Fuerzas Armadas Españolas) are the military forces of the Kingdom of Spain, which consist of the following branches:

The Army (Ejército de Tierra = "Army of the Land/Ground") is the terrestrial army of the Spanish Armed Forces responsible for land-based military operations. 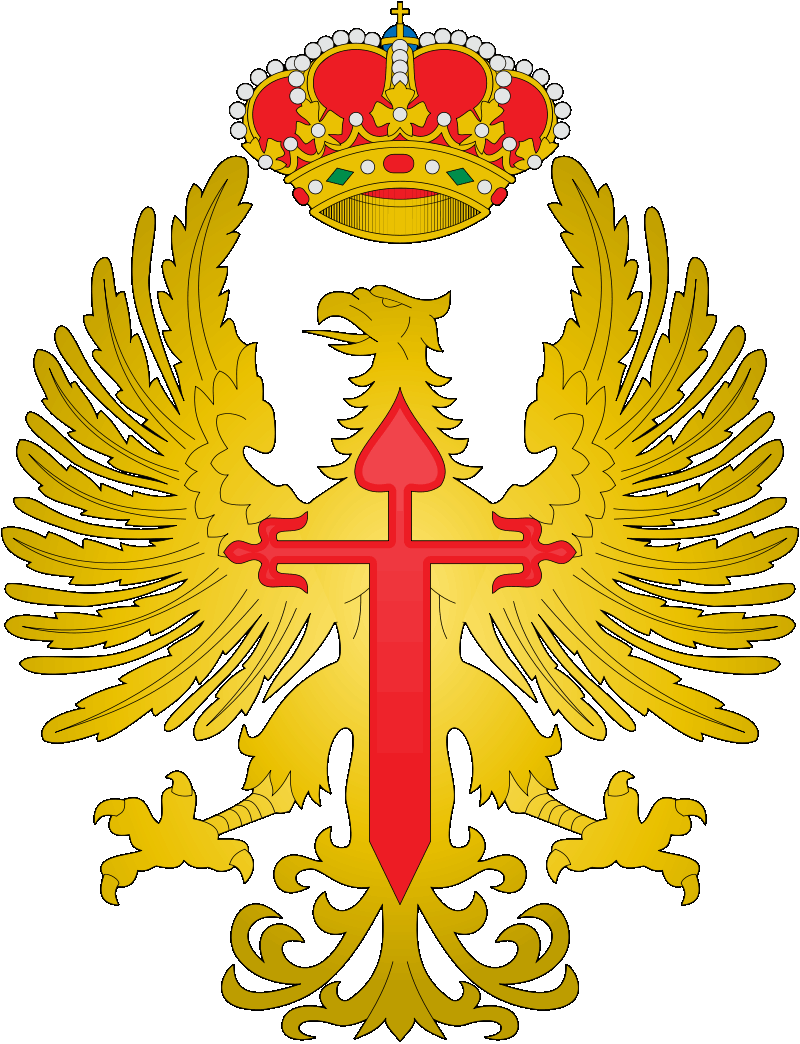 It is one of the oldest active armies - dating back to the late 15th century. 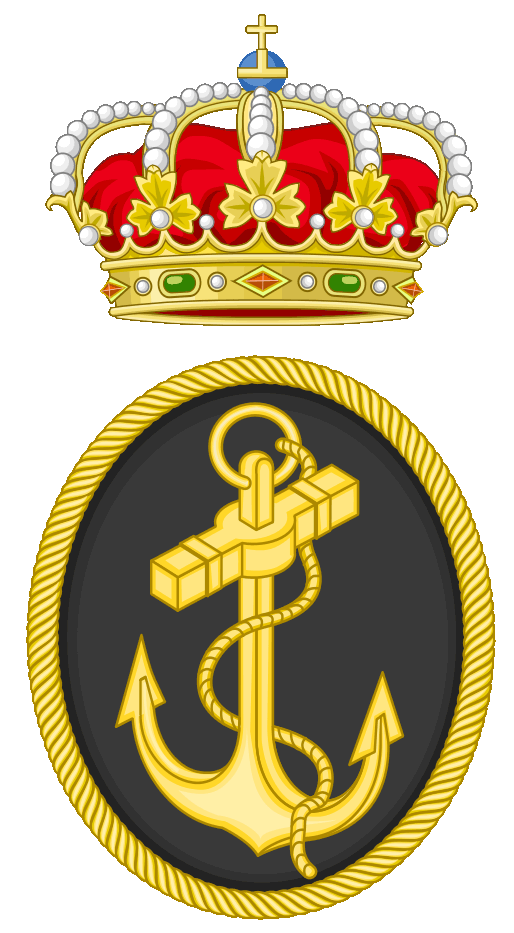 The Navy (Armada Española) is the maritime branch of the Spanish Armed Forces and one of the oldest active naval forces in the world.

The Marine Infantry of the Spanish Navy (Infantería de Marina = "Naval infantry") is an elite military unit, highly specialized in amphibious warfare, and its ability to embark on a short term notice with (land, air and naval) Navy assets, makes it a unit with a high strategic value. 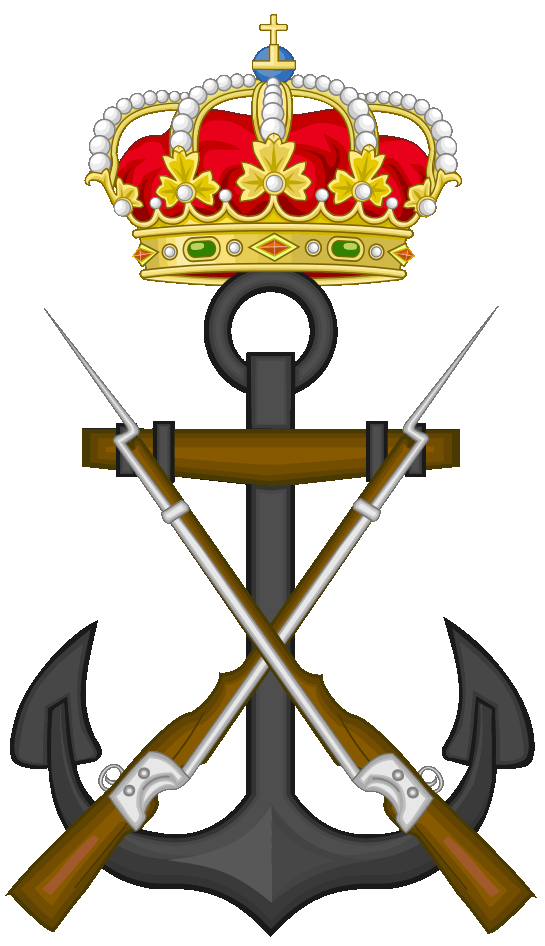 Infantería de Marina is responsible for conducting amphibious warfare by utilizing naval platforms and resources, being fully integrated into the structure of Spanish Navy (Armada Española).

It is the oldest Marine Corps in the world, since it was formed in 1537 by Charles I of Spain (also known as Charles V, Holy Roman Emperor). It is divided into base defense forces and landing forces. One of the three base defense battalions is stationed with each of the Navy headquarters.

The Air Force (Ejército del Aire = "Army of the Air") is the aerial branch of the Spanish Armed Forces. 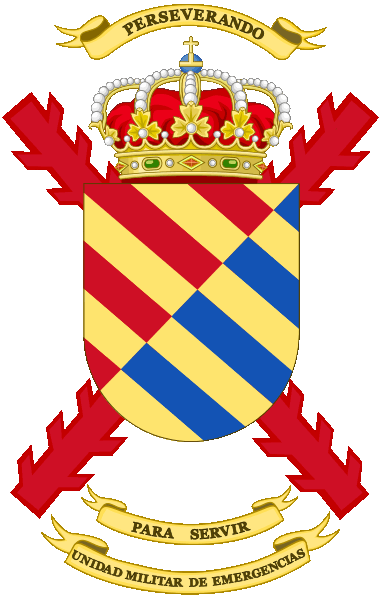 The Military Emergencies Unit (UME - Unidad Militar de Emergencias) is the newest branch of the Spanish Armed Forces, created on October 7, 2005 and enacted in law by the Royal Decree 416/2006 on April 11, 2006.

UME is responsible for providing disaster relief throughout Spain mainly, and abroad if required.

The Royal Guard (Guardia Real) is an independent unit of the Spanish Armed Forces dedicated to the military protection of H.M. the King of Spain and the members of the Spanish Royal Family.

The Guardia Civil daily patrols rural areas, highways and ports, and investigates crimes there, whilst the Policía Nacional is responsible for urban areas along with Policia Municipal, which is organized in most cities. These 3 forces are coordinated by the Spanish Ministry of the Interior on the national level. The Guardia Civil is usually stationed at "casas cuartel", which are both minor residential garrisons and fully equipped police stations.

As a national police force, the Guardia Civil is comparable today to the French Gendarmerie, the Italian Carabinieri, the Portuguese National Republican Guard and the Dutch Royal Marechaussee as it is part of the European Gendarmerie.

The famous triple-buckled boots manufactured by "Segarra" were introduced in the Spanish Armed Forces circa 1964, and they were used until early 1980's. 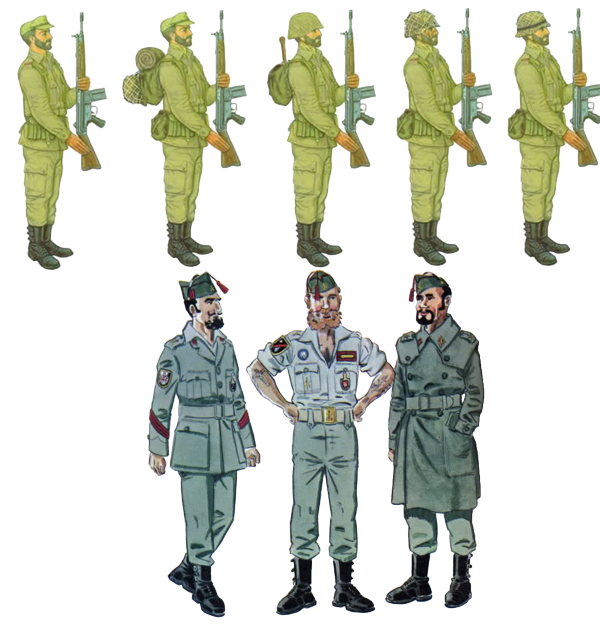 Approximately at this time (years 1966-1982) the traditional Spanish khaki brownish colored uniform was changed to NATO green uniform model M-82, and was used en-masse from the year 1986. 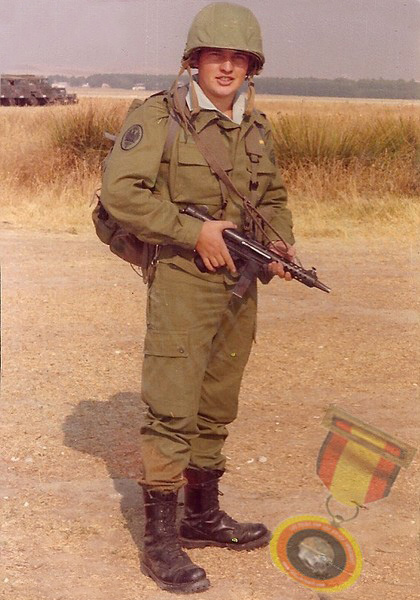 Fully laced-up boots became common from circa 1984...1986, and apparently it seems that during the 1980s ands 1990s Ejercito Español had many variations of design on their boots: Panama-type out-soles (more or less similar to the American original design),

"Chevron", Vibram (for mountaineering boots) and Segarra-type tread patterns, with 3 buckles and all-laced, with simple round eyelets and partially speed-laced boots. 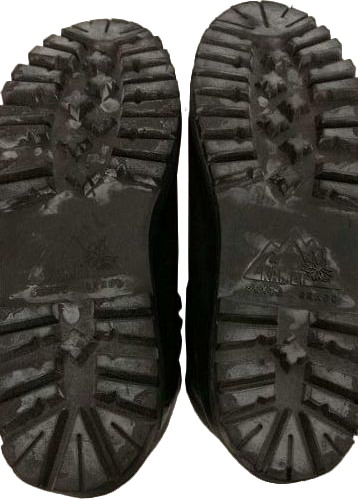 The Spanish combat boots of the 1970s and the first half of the 1980s, can be subdivided into three general types, according to the main tasks and general approach: regular boots, their lightweight version and paratrooper's boots.

Let's consider all these boots in details.

1) "Botas de salto paracaidista" ("Paratrooper's boots") - according to their name itself, they are destinated exclusively to paratrooper units.

The most characteristic features of these boots are: 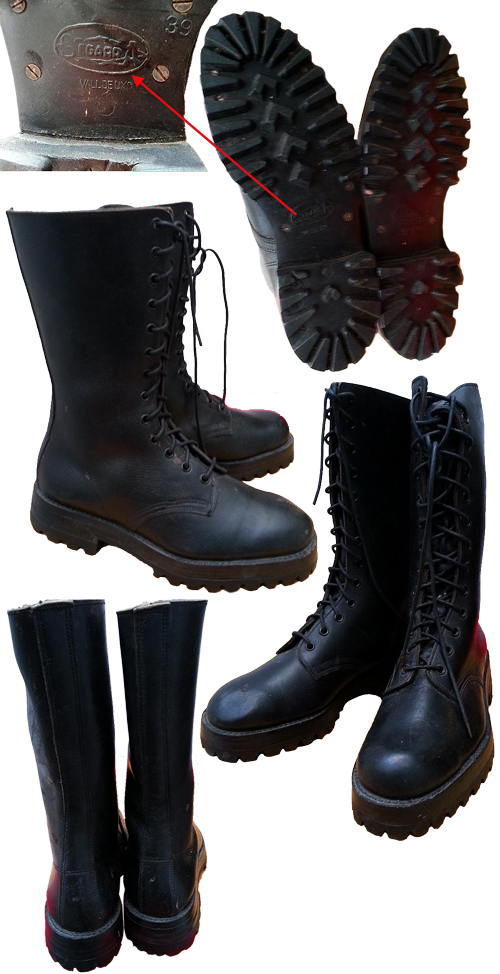 - they were higher (31 centimeters in height) than the regular three-buckles boots, and the lacing system was formed by simple round eyelets (up to 13 pairs of eyelets in some models).

The paratroopers keep their traditions, so in Spain, Portugal and some other armed forces they prefer to wear them with surplus green or black paracord instead of the usual black laces.

During the parades, the paratroopers use to wear white laces with their high-laced boots.

2) "Reglamentarias botas" ("Regular" boots) - the most wide-spread combat boots of the Spanish armed forces which were to be used with combat uniforms. 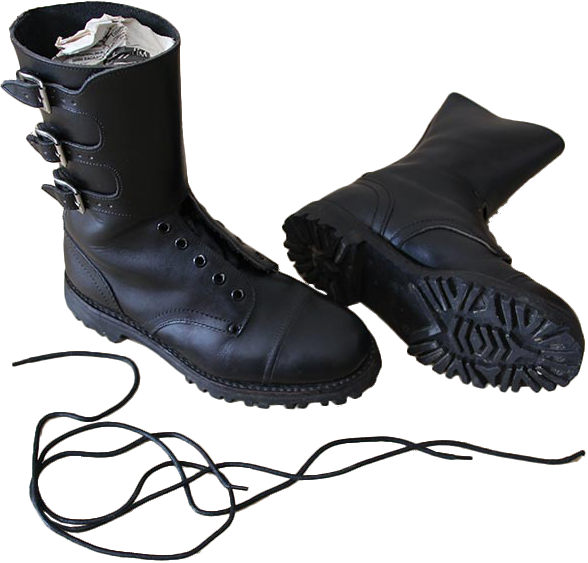 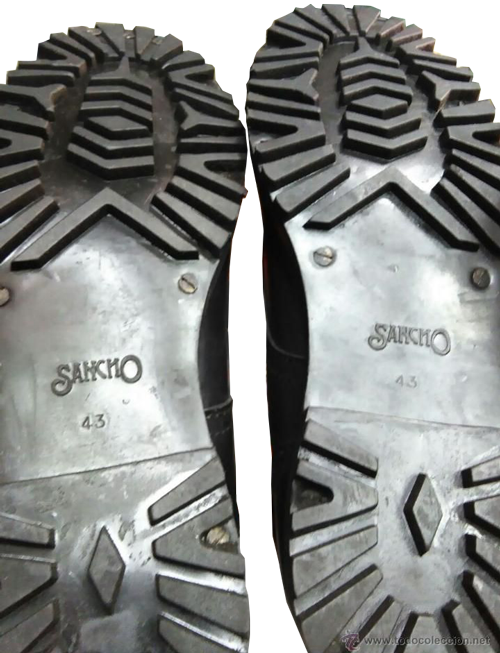 The out-soles, made of solid, robust and wear-resistant black rubber were quite thick, especially in the 1970s. 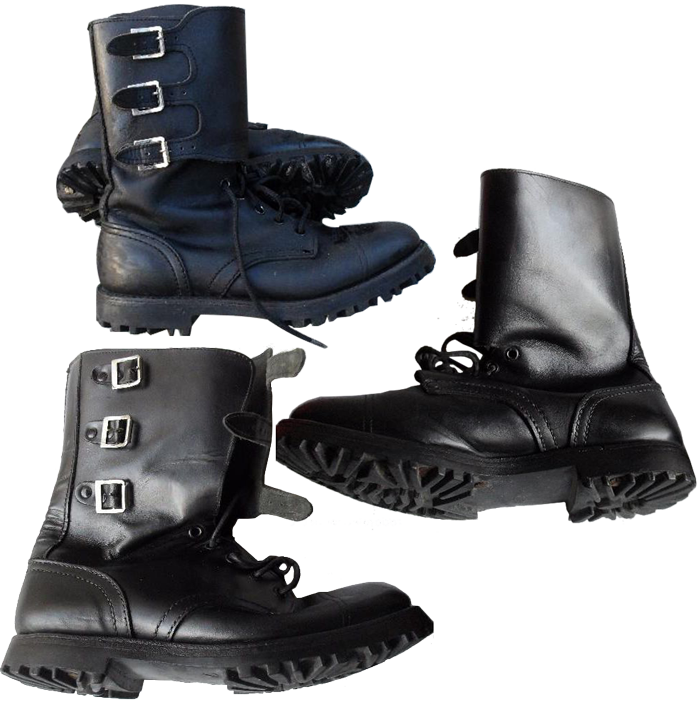 The soles were stitched and glued, were reinforced with additional fixation screws ("tronillos").

3) "Botas ligeros" ("Lightweight" boots) - the boots, intended "to walk on the streets", which basically were almost the same as the regular boots, but their out-soles were quite thinner, they had smooth and shallow tread pattern, similar to the West German Bundeswehr paratrooper's boots and jack-boots (variant 1) of the 1960-s. 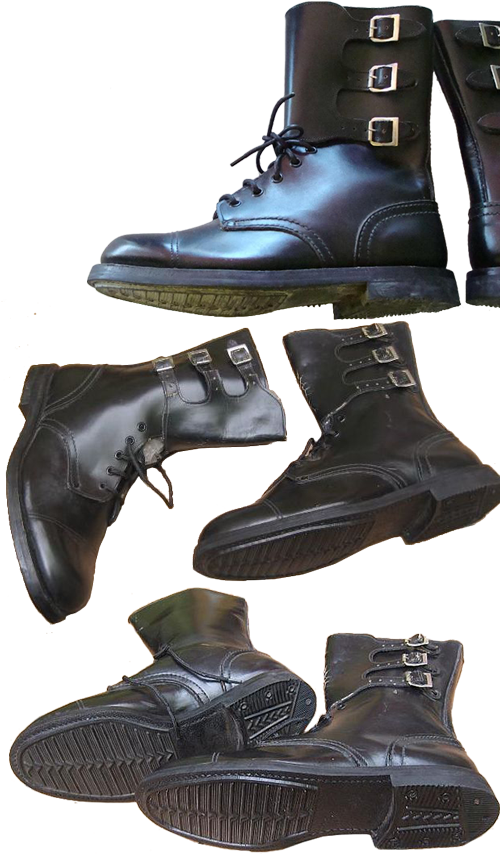 Since these boots were intended to be worn in garrison, on flat floors, but not in the field, they lacked deep lugs on the soles and were more lightweight and comfortable in wear.

As time passed the boots with the out-soles of smoother pattern were used less, especially after introduction of new models with Panama-type soles. 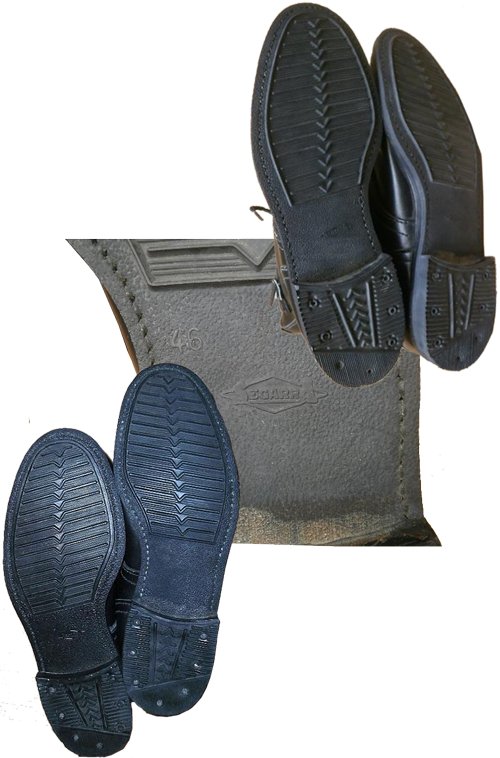 It is important to note that both the uniform and the combat boots were made for the Armed Forces by different companies of the textile and footwear manufacturing industries, which managed to win the contract by auction and, although all of them had to follow the certain defined regulated specifications, there were some peculiarities and small details adherent to different manufacturers. The Spanish military stuff usually bear the name of the manufacturer and the other info like size, Contract details and the year of manufacturing etc. 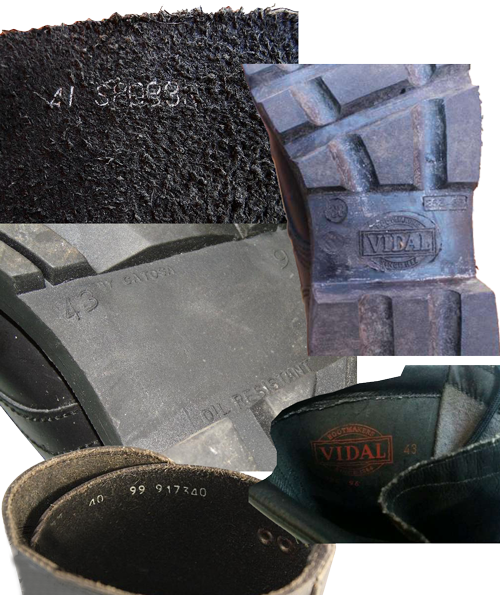 This can obviously be seen in the "El reglamento de Uniformidad de 26 de marzo de 1956" (Regulation for the Uniform of March 26, 1956), where it is described as "uniforme de salto y Campaña" ("Uniform for (parachute) jumps and campaign") - with inclined pockets. Already in the years 57-58 we find this as "uniformes de campamento" ("camp uniform") -with not inclined pockets, a model that will also be referred to as "marcha y campaña" ("march and campaign") uniform, supplemented with the regular boots and M1-type helmet. As a main feature of this uniform's pants, the reinforcement in the crotch (not only back side) emphasizes the constant tear-and-wear, caused by the friction of the parachute straps.

The change of the Spanish uniform color from classic M-67 (persimmon) to an intermediate variant, that might be called "M-67/79" (softer brownish green) to olive green "NATO"-colored model M-82 was made largely due to the convergence of the Spanish uniform to NATO standards and adapting it to a the most possible theater of operations: Central Europe. 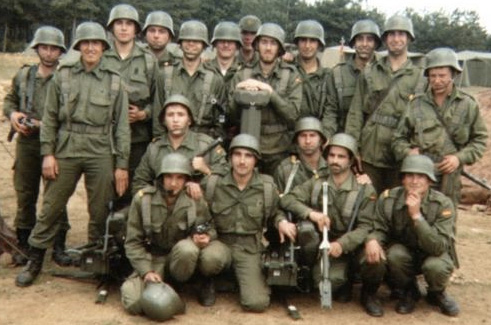 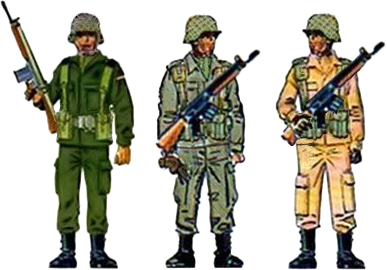 The difference of colors between the aforementioned models of the Spanish uniform ("M-82" olive green "NATO" uniform, "M-67/79" and "M-67") are shown on the picture above

That was approved by the country's Congress of Deputies (Cortes Generales/Cortes Españolas) in October 1981 and became effective in May 1982, after entry of Spain into the North-Atlantic Alliance. For political reasons in the years prior to 1982 it was not possible to use the name "NATO" for the new olive uniform, but later the name M-82 NATO became wide-spread. With this uniform the use of the Spanish national flag on the left arm was adopted, because that is the standard practice in all the NATO-members.