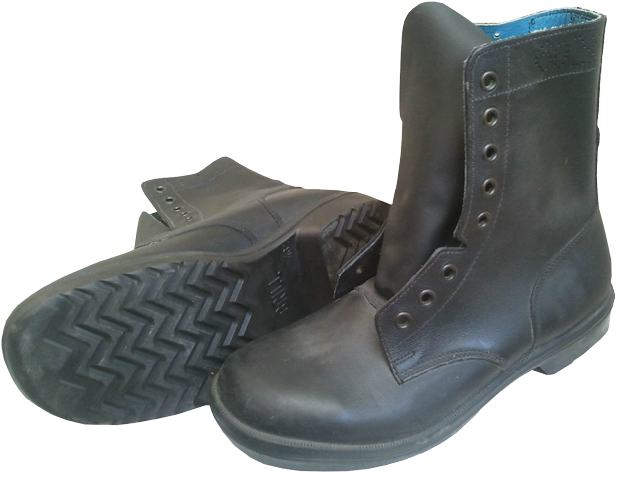 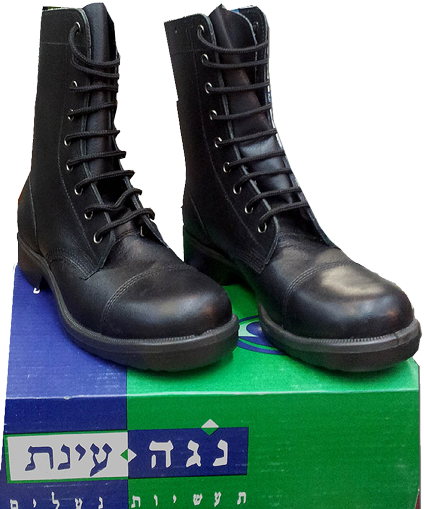 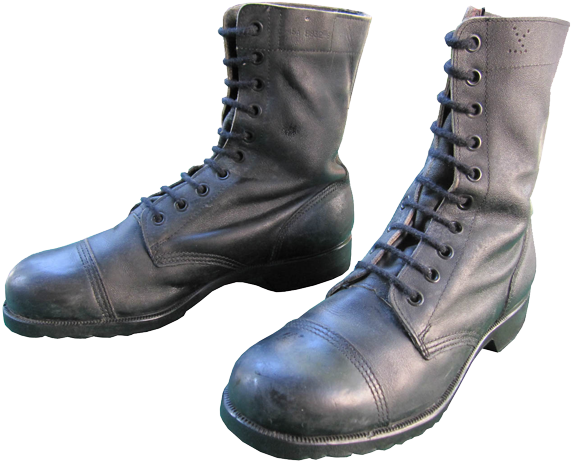 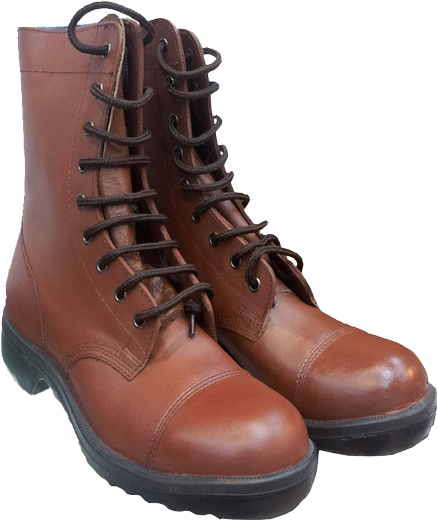 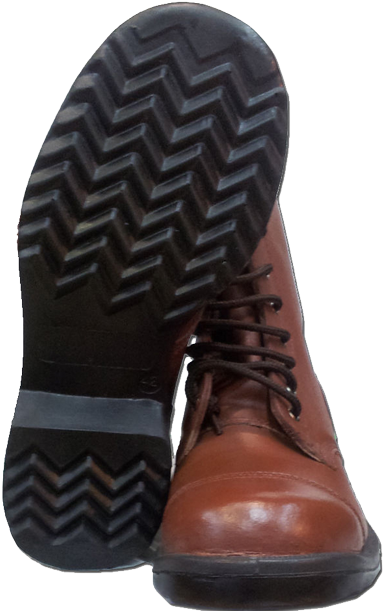 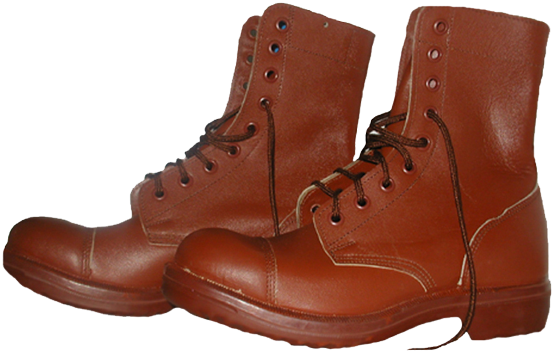 The original military boots of Israel are obligatory marked with IDF logo: 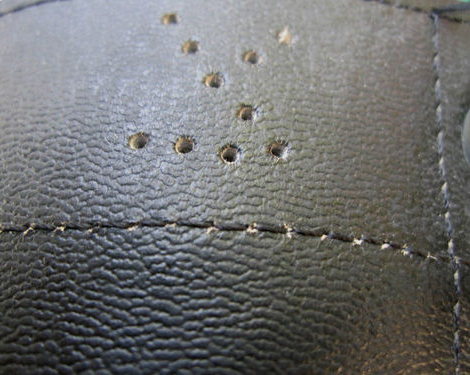 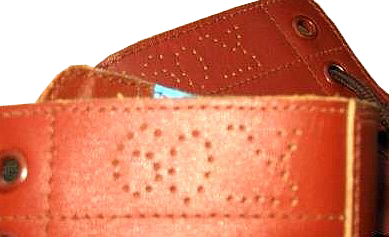 "Tz" - the first letter of the Hebrew acronym Tzahal (לײהצ) - the military forces of the State of Israel (Hebrew: Tzva Hahagana LeYisra'el). Besides the IDF logo, all the Israeli military staff is marked by numerical (sometimes numerical and alphabetical) code. 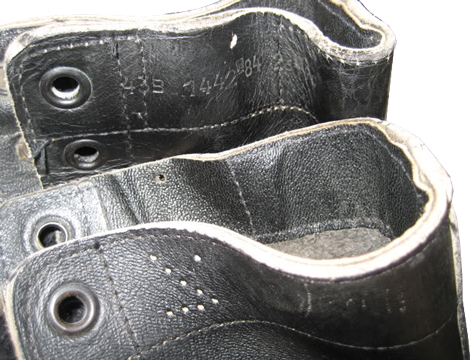 At the top of the boot the special pockets for soldier identification tags ("dog-tags") are provided. 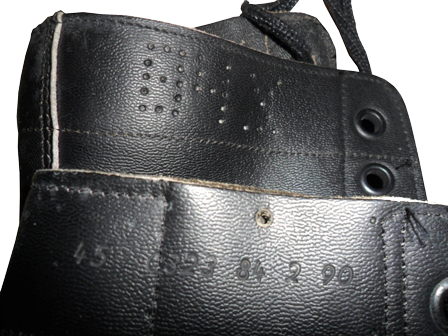 The Israeli soldiers use to call these tags "diskit" 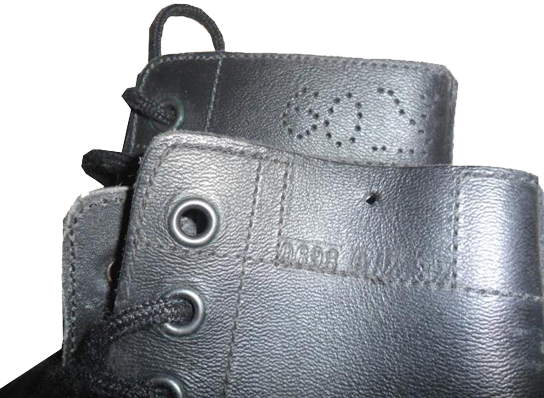 There are two kinds of Israeli "dog-tags": big and small. The first bigger one with the name of the soldier and his IDF identification number is worn on his neck, often in a special small case with the symbolics of the soldier's division.

Another two smaller "diskits", with the indicated Israeli Armed Firces ID-number only use to be worn in the aforementioned small pockets on the boots. They serve for identification of the soldier in case of ... 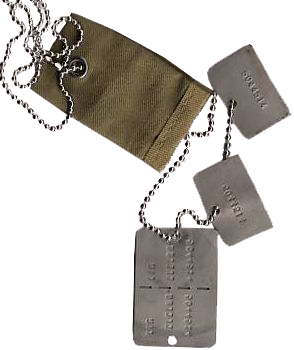 Israeli brown boots are usually worn by paratroopers and some elite brigades, such as "Kfir", "Golani", "Givati", "Nahal"...

Black coloured boots are provided for infantry and artillery units, tank crews, Air Force and Navy, as well as for border guards, police and paramilitary forces.

Israeli military boots, both black and brown vary also in colour of the strips inside of the boot tops: 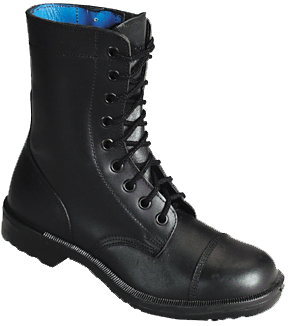 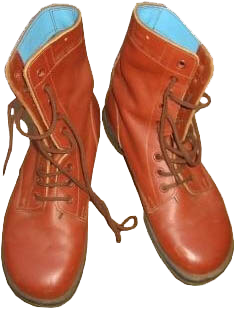 The blue-coloured strip inside the boots top indicated the "light" version of the Israeli boots. Regular (i.e. "heavy" boots) have black-coloured strips. This indication should make the selection of "proper" boots much easier for a soldier, accordingly to the planned combat mission. During the long marches it is much better to run or walk in "light" boots; however, sometimes heavy and sturdy boots are more preferable in some situations.

The top of the IDF boots is made of durable and thick leather, the sole is made of polyurethane or vulcanized rubber (depending on the manufacturer, but obligatory in accordance with Israeli army boots quality standards), with non-slip soles and "zig-zag" ("Chevron") tread pattern. The sizes of such boots vary from 40 through 46, these boots have two-layer thickened sole, compared with one-layer soles in smaller size boots (sizes less than 40).

The leather of the Israeli boots is usually very stiff. Unlike American ones, the IDF boots require manual softening, for example, by hammer-tapping, having put a piece of wood on the opposite (inner) side of the boots leather.

Among the contract manufacturer of Israeli military boots one can't help mentioning: 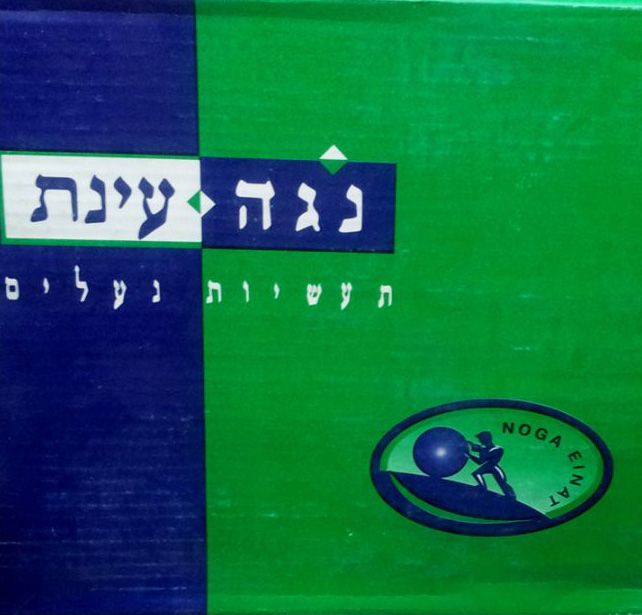 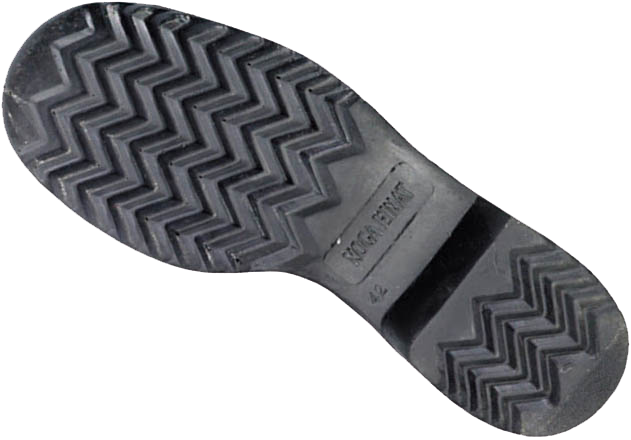 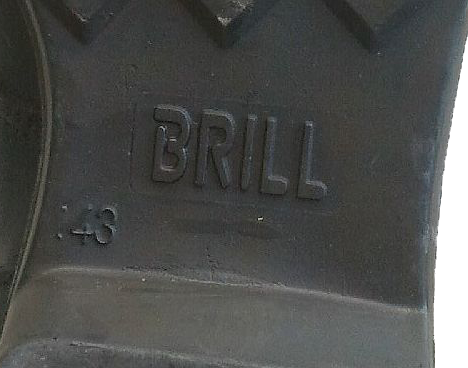 "Hamegaper" (with "Ro-Search" logo), "ELBA" and some Kibbutz-based workshops (e.g. Northern Israeli Kibutz "Dafna", which specialize in producing boots for the IDF. 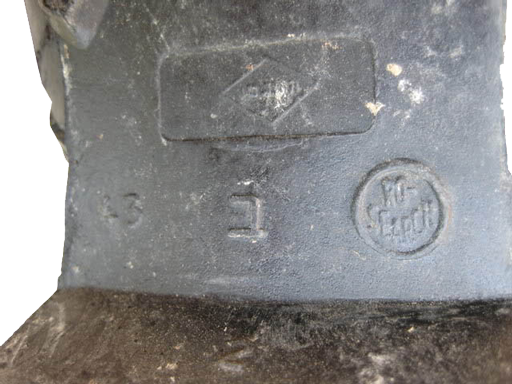 Israeli army boots, with some modifications and refinements were made on the basis of the United States Army combat boots, the most advanced model at that time, with "Chevron" ("zig-zag") tread pattern, which had been produced by the famous American boots companies, such as "Addison", "McRae", "Wellco" and many others. 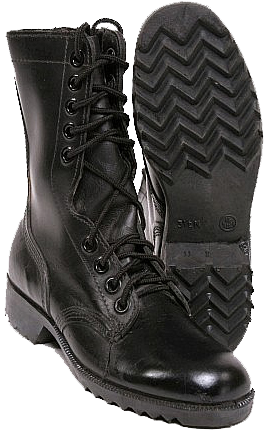 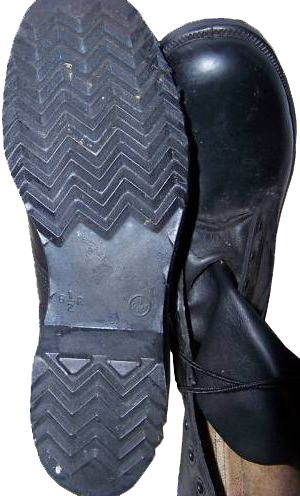 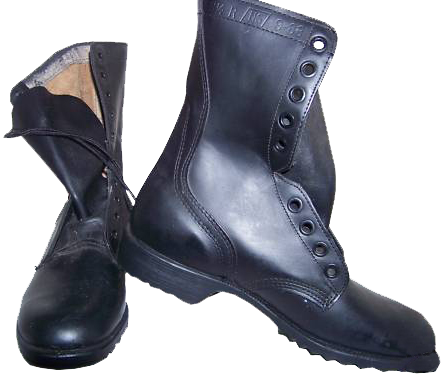 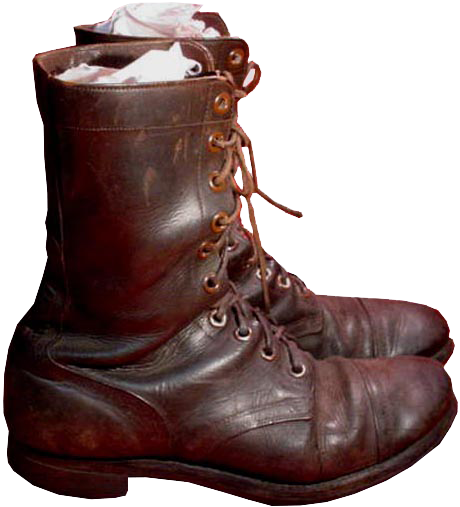 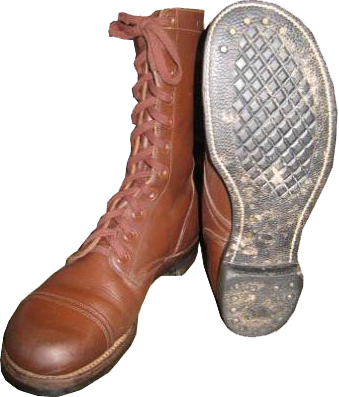 These boots have long been out of circulation in the American military, and since 2005 the U.S. Armed Forces do not use shiny black leather polished boots, which require cleaning and cream-polishing. 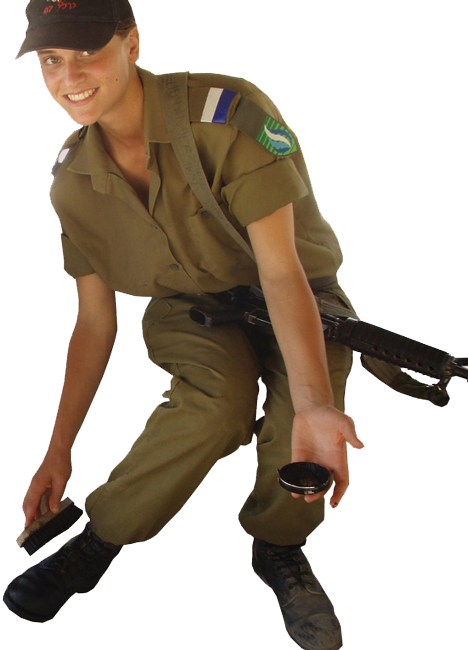 Never treat the boots as the girl shown on the photo!

Don't smear your boots with boots polish over of the dust and dirt!

It seems to be the most "quick and easy" way to kill the boots leather, even of such durable boots. Your boots will serve long and well if you keep four several simple rules:

1) wash dirt and dust off the skin:

2) wipe and dry them carefully:

3) apply the boots polish, give it the time to soak in and dry:

4) remove the excessive cream with a brush and polish the surface to make the boots shiny.

All these procedures, however, are often simply not feasible during the combat operations. This was one of the reasons why the U.S. Armed Forces went on composite-materials boots (the top of such boots is made of genuine suede (cowhide leather) + composite materials such as CORDURA® nylon, Cambrelle lining, etc). Such boots are more lightweight, breathable and easy to clean (dried mud can be easily cleaned off with brush). The leather uppers are protected from moisture and water by special impregnation.

Some part (nowadays almost all) of the Israeli army boots have been made by American footwear companies. This is usually indicated on the outsole - we can see the logo of the boots manufacturer, McRae in this case. 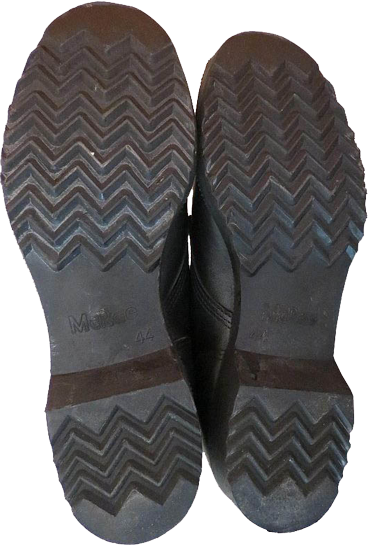 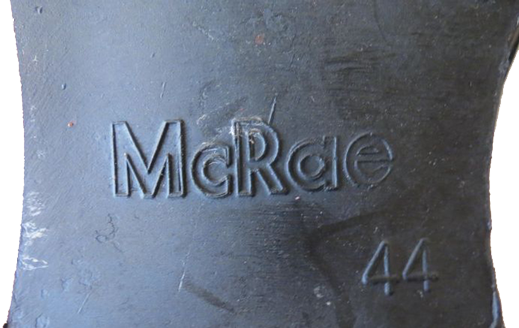 or round-shape "Ro-Search" logo of "Wellco Ro-Search Industries, Inc.". By demand of Pentagon (the US Department of Defense) this company during the Vietnam War transferred the advanced self-developed "direct mold" technology of boots manufacturing, a step forward from the conventional "glue-and-stitched" method used by all the others manufacturing companies. This was caused by strict necessity of very fast production of large quantities of military footwear, especially jungle boots for the US troops in Vietnam. Many companies have adopted this new technology and began combat boots manufacturing under the license.

can be found on the American army boots of many other manufacturers, in particular, "Altama", "Belleville" and others, as they use the technology under license.

In fact, there is no shame to copy and use the "know-how" of other countries. This choice is correct also because after World War II the United States firmly occupied the leading position in the development of military technologies in various fields, especially in production of uniforms and boots for the armed forces.

This fact can be explained by:

- Almost continuous participation of the U.S. Armed Forces in various wars and conflicts;

- Tests of the developed equipment in actual combat conditions, eliminating of faulty elements and ideas and developing of successful trends;

- Huge amounts of money, which have been spent on military research and development in the United States during many decades;

- The existence of powerful scientific-research centers, public and private, working under the auspices of the Pentagon or in close contact with US Department of Defense.

All the other countries just use the American experience according to their own capabilities.

One can write a whole dissertation on this subject, providing the research results with many photos and examples with the evidences, but this is far beyond the scope of this review...

If to return back to the army boots of Israel, it is worth to say that the Norwegians used the American prototype of army boots and took advantage of this just in the same way as Israelis and Greeks, for instance.

A very successful model of the Norwegian M-77 boots (adopted in 1977), with the "Chevron" tread sole, the same as in US and IDF army boots, is still produced (at first in Norway, not in Estonia) virtually unchanged and actively used by the Norwegian and Estonian Armed Forces! The modifications consist in new design of the boot's top (lacing system) and shape of the toe and the heel (the soled were adapted for ski bindings).

Among the footwear used by the Israelis army, the "Palladium" light canvas boots are worth mentioning. Initially designed for the French armed forces, they feature rubber soles and "direct mold" method of attachment. They dry very quickly (aided by special material of the boots top), they are light and comfortable, and they protect well against small stones and bushes. Howeber, these boots fix the ankle poorly, similarly to keds (sport canvas sneakers with rubber soles).

The canvas "Palladium" boots were developed by the same-named French company, founded in 1920s, which was engaged in manufacturing tires (made of layers of canvas and vulcanized rubber) for the new aviation industry. The quality of their products was so high, that soon the majority of aircraft in Europe used the tires made by "Palladium". After World War II the aircraft industry has entered the era of recession, so the demand for tires decreased dramatically. "Palladium" decided to open a plant in Pont De Cheruy, France, and begin the production of boots, which would be just as strong as the aircraft tires. In 1947, they entered the footwear market with their canvas "Pampa" boots (really famous now!), whose functionality, comfort of wear and durability were so good that the French Foreign Legion began to use these boots widely. The most severe trials have been carried out in harsh desert conditions of North Africa and on the rugged terrain of the Atlas Mountains. 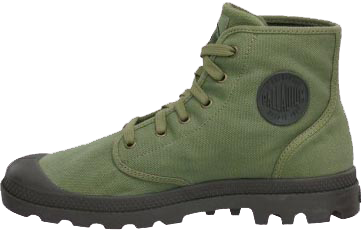 Below one can see the samples of the Israeli-made "clones" of the popular French boots: black low version and the high green ones (with the two clamps). 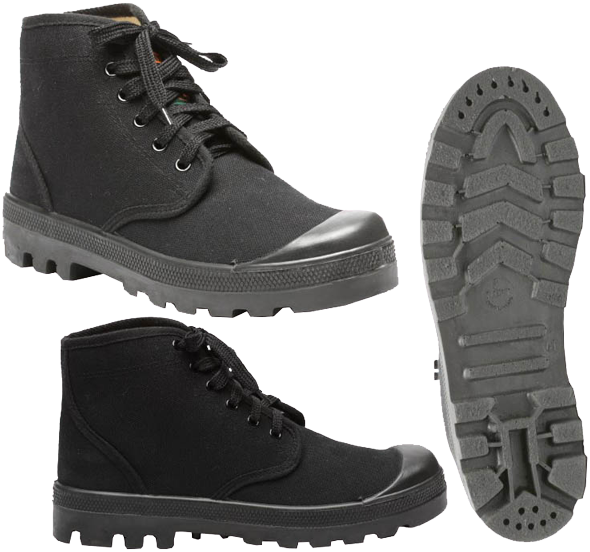 It is easy to distinct the original ones and the copies of these famous boots by the tread and labeling of the products (for example, one can see the label of the "Dafna" Kibbutz. 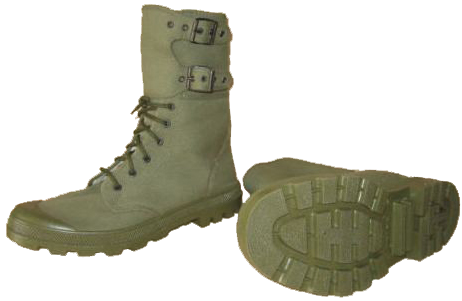 After more than 65 years of service, the time-tested boots of this type are still widely used, for example, in the Israeli security services. 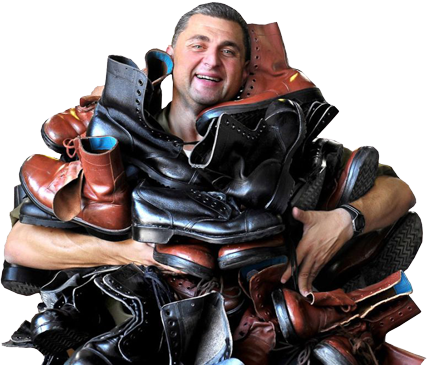 These strong, reliable and lightweight boots, relatively cheap in production, with all the advantages and disadvantages (100% synthetic materials) of footwear of this type. They are often called "IDF Scout commando canvas boots". These boots has found wide application in the Israeli police, rescue services, units like "Shayetet 13" ...