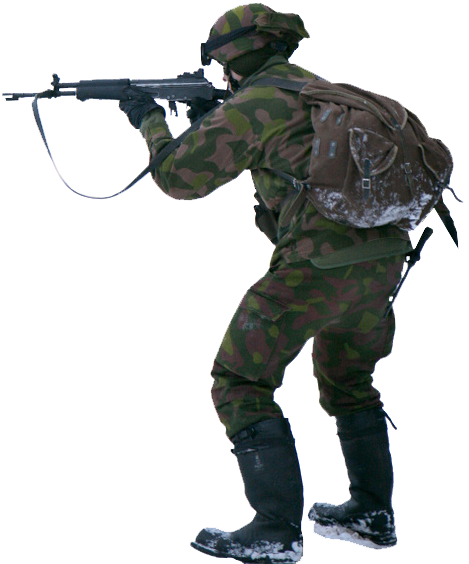 The Finnish Defence Forces ("Puolustusvoimat" in Finnish language, "Försvarsmakten" in Swedish) consists of three main components: the Finnish army ("Maavoimat"), Navy ("Merivoimat") and Air Force ("Ilmavoimat"). Border Guard ("Rajavartiolaitos"), which includes the Coast Guard units are the part of the Ministry of Internal Affairs of Finland. However, if necessary, they can be fully or partially incorporated into the Finnish Defence Forces (FDF), in the case of bringing them into full alert.

After World War II the servicemen in Finland, as in many other armies of Europe, wore high boots or low boots with laces. At that time the leather top of such boots was glued and stitched down to thick leather out-sole, the heel featured rubber tips. Just like the Swedish army footwear, the Finnish boots also had longitudinal grooves on the heels for skis fastening. 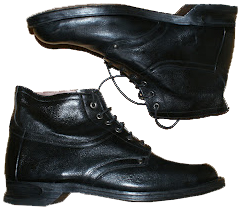 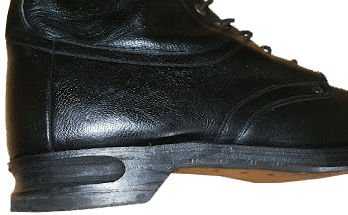 By the 1970s the high-laced boots were finally introduced in the Finnish Defence Forces. Before transition to M91 model military boots the FDF used the boots, very similar to the Swedish ones (namely, the semicircular cut in the lower part of the boots top, just under the malleolus bones). 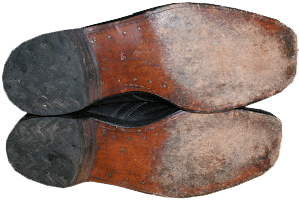 The neighbouring Sweden traditionally used middle-height army boots, and high lace-up M/90 boots were introduced only in 1990. According to the Swedish Army Statute the pants should not be tucked in the boots, and are to be worn over the boots. The Finns started using high lace-up boots in the 1970s, and these boots even a bit higher than the boots of contemporary European counterparts. The lacing system is provided by 11 pairs of simple round eyelets, unlike conventional 8-9 pairs in Europe. The design of these boots, in general, is standard: the leather upper is stitched and glued to the leather middle sole, over which the protector of solid vulcanized rubber was glued. There were different tread patterns, mostly shallow and zigzag-formed, or even grainy. 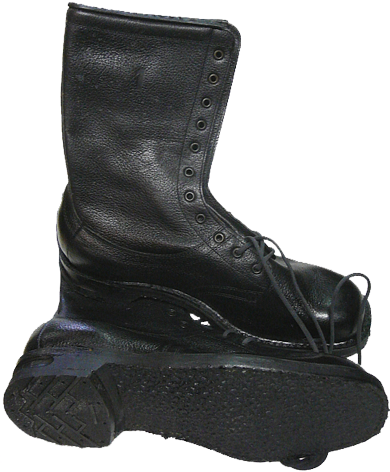 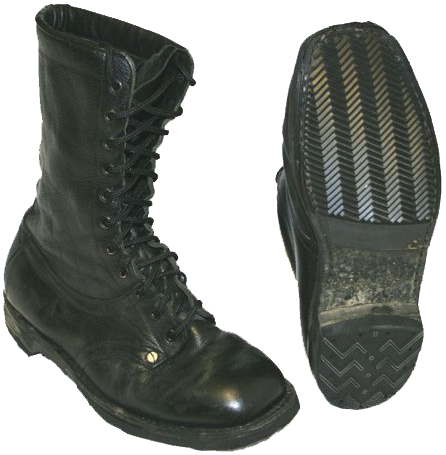 The upper part of such boots featured a novelty -soft leather "collar". The top of the boots (the lower part of the lacing system) is reinforced by metal rivets.

The stitching of the boot's welt ("Goodyear" system) is very similar to the one used in the Belgian "Rugak" boots and West German Bundeswehr boots of the 1970-80s.

The Finnish M91 boots, which can be purchased in Finland for about 150 Euros, look very similar to contemporary German Bundeswehr boots. The out-sole tread pattern is practically identical to the German "Berghaken Profilsohlen", which is anti-slip in different directions and provides good adhesion to different types of surfaces. 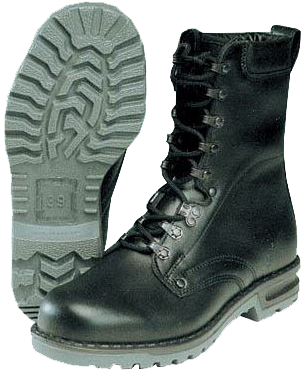 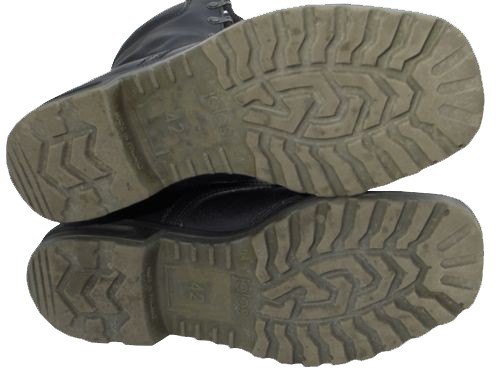 The out-sole itself consist of not two pieces as the German one (leather + polyurethane), but of three layers (leather sole, soft polyurethane foam and an outer layer of a solid and elastic rubber, which is oil and petrol-proof and resistant to wear and low temperatures). Accordingly, the Finnish footwear manufacturing companies "Jalas" and "Sievi" have chosen not brown-yellow solid polyurethane soles (used in Bundeswehr boots), but light grey, softer composite material, the same as on the Swedish military boots of model M/90.

Most likely, this is due to much colder climate in Finland and Sweden: the polyurethane out-soles turn to be more slippery and tough in the cold, so it became necessary to eliminate this drawback. The heels of the Finnish army boot, the same as Swedish and Norwegian boots, feature longitudinal grooves intended for attaching skis and make the heels more lightweight. 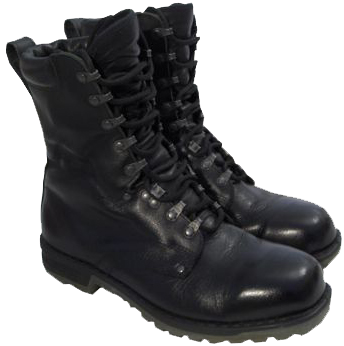 The design of the top and the lacing system look like German Bundeswehr boots due to:

- Foam insulation and an additional layer of leather on the bottom of the boot just above the malleolus bones;

- Leather loop for fixing the excess length of lace wrapped around the top of the boot;

- "Half-closed" flap of the tongue, which is stitched almost to the boot's top.

It is worth pointing out some other differences from Bundeswehr boots:

1) Finnish military boots are generally designed for "wide" feet (national peculiarity of Finns and some other North European nations), while there are practically no model for "narrow" feet, as opposed to American army boots; 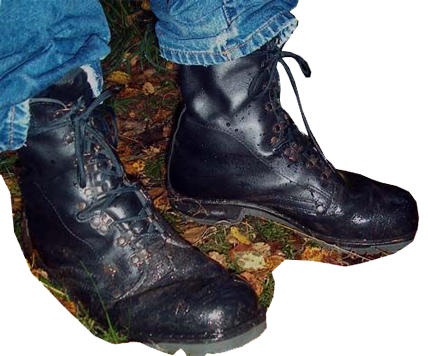 2) The top of the boot feature soft leather "collar" (padding), absent in the German army boots models prior to the "Model 2000" Bundeswehr boots; 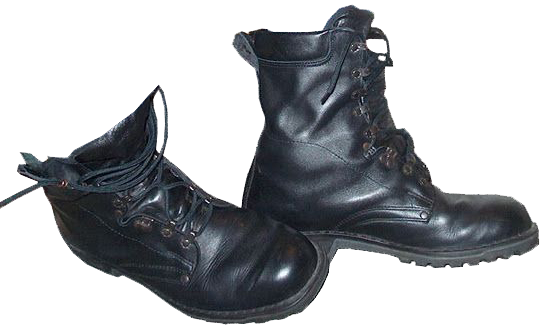 3) The leather loop on the rear side of the boot is not stitched down to the boots top along its entire length, but it is stitched only in its lower part, so one can often see "hanging down" loops on the photos of Finnish and Estonian soldiers;

4) The nose of the boot and the top part (with lacing) are not only stitched (as it is seen on the German boots), but also reinforced with a pair of steel rivets on each boot;

5) The leather of the Finnish boots is smooth, but not "grainy" as on the old models of Bundeswehr black boots of the 1980s. 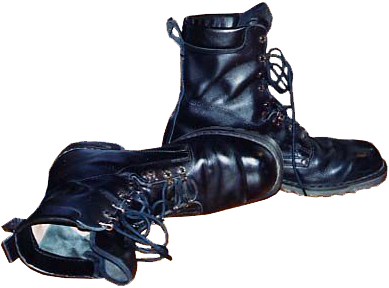 was established back in 1916, and in recent years it has become one of the main suppliers of boots in the Nordic countries (up to 60% of the company's products were exported). The manufacturing site, which employed up to 200 workers, and the company's headquarters were located in the Finnish city Jalasjärvi. In 2008, "Jalas" became a part of the Swedish "Ejendals Group" corporation, the largest supplier of professional footwear and gloves in northern Europe which was the business partner of "Jalas" since 1984. The financial profit from "Ejendals" and "Jalas" companies merging reached about 100 million Euros just during the first year. Since 2011, "Jalas" operates under the new name: "Ejendals Suomi Oy".

Since the second half of the 1990s the companies "Jalas" and "Sievi" also released a modified winter version of M91 boots: with the same standard out-sole tread pattern, as the regular boots, the new winter boots feature both lacing and zipper (on the inner sides of the boot). 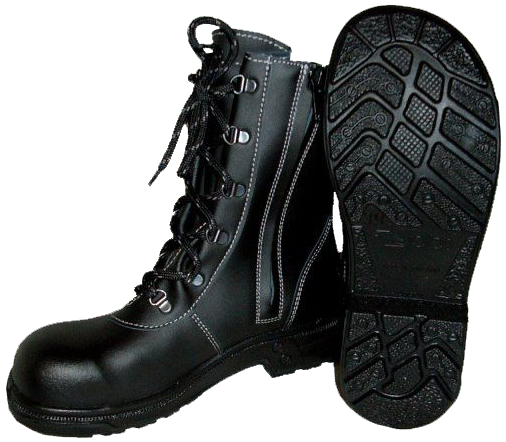 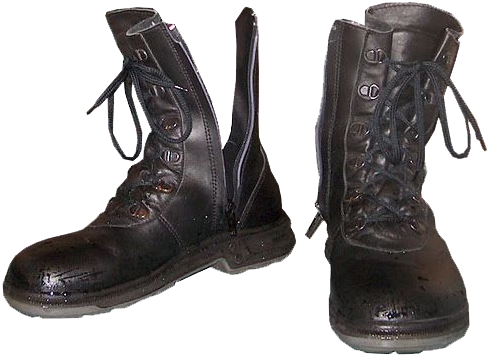 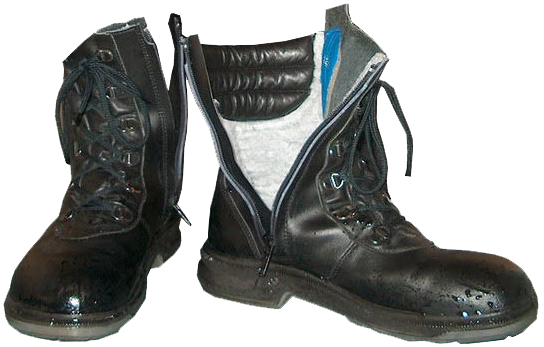 The flap of the tongue (stitched to the top) is also "half-closed", the lacing system eyelets were replaced by a semi-circular "D"-shaped rings; the insulation is provided by white synthetic fur; the removable felt insole and pretty thick dampening leather collar on the back upper side of the boots provide good comfort of wear and thermal insulation. 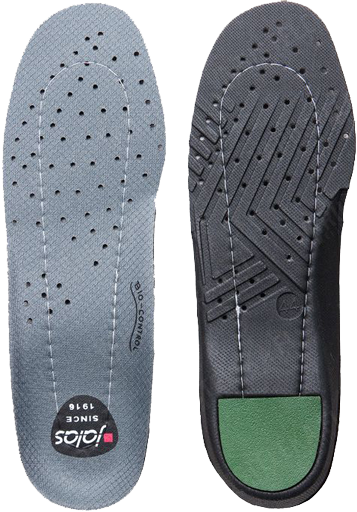 In 2005, FDF introduced new type uniform, the so-called "model 05", or M05. This name applies both to the new model clothing (summer and winter pixellized camouflage) and new advanced type of the military boots, which are called "Maiharit M05" ("Taistelijan Jalkine M05") in Finnish language. 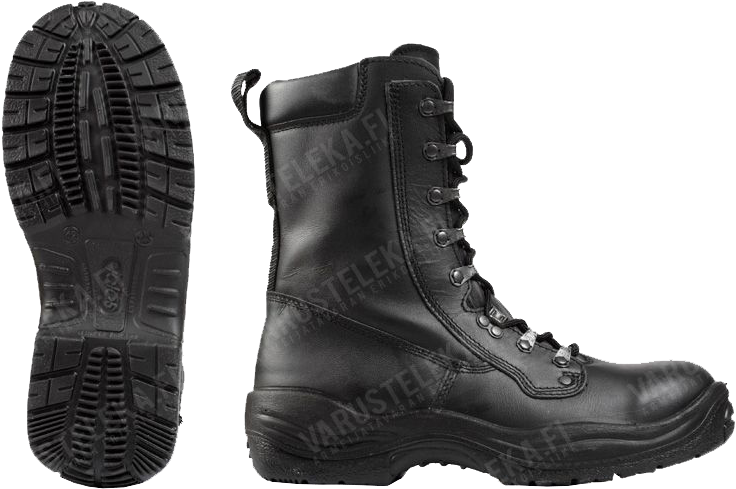 Nowadays in Finland these boots are made mainly by "Jalas" and "Sievi" companies. On the Finnish web-site the boots of M05 model are often referred to as "M05 Maiharit Jalas / Sievi", their price is about 170 Euros. 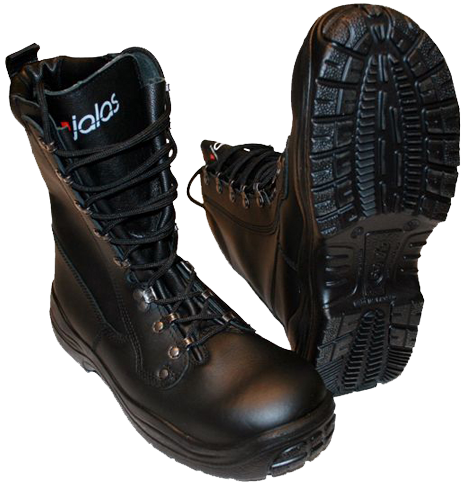 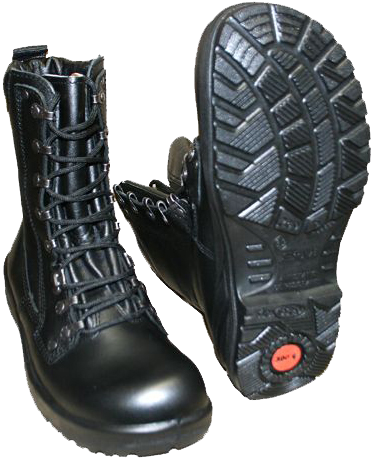 As a lot of old-style military uniform sets are still kept on Finnish military warehouses, the soldiers of Finland often use to be issued sets of M62 model uniform along with M91 model boots ("Varsikengät M91-jalkineen"). Often one can see a mixed-style general appearance, for example, M05 type camouflage uniform together with M91 model boots, or vice versa: the boots of the new model in combination with old M62 camouflage uniform.

The boots of M05 version, lined with "Gore Tex"-type membrane material are more expensive and cost up to 210 Euros in Finland, but the high price is pre-determined by the high price of the materials used.

I can not say that these new boots follow the new trend "minimum of seams - maximum water-resistance", their tailoring involves a lot more stitches than it could be. Moreover, the lacing system of the simple round eyelets can also be considered obsolete. 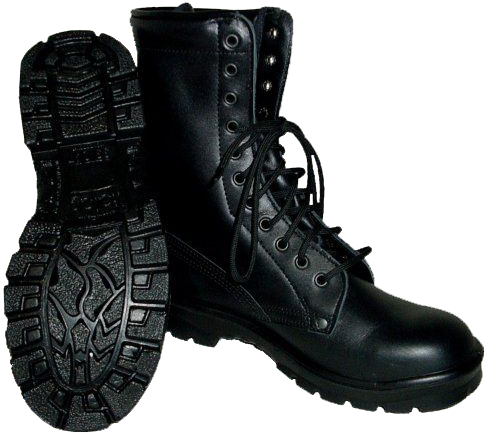 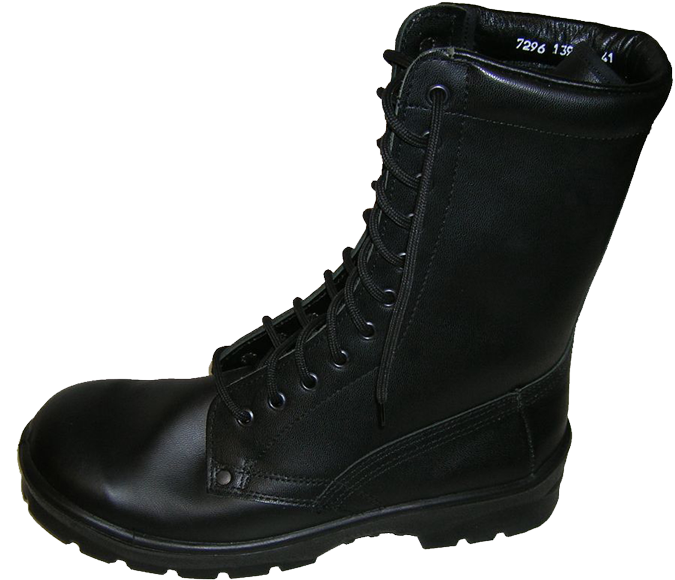 One can say that lightweight boots for "paratroopers", manufactured by "Jalas" company, follow the tradition of old-style boots which were in use prior to the model M91: such is the overall style, the soft leather cushion on top of the boot and the lacing system consisting of 11 pairs of eyelets round. The gluing and stitching method of out-soles mounting gave way to a more progressive "DMS - Direct Molded Sole" method, that facilitated the use of more lightweight out-soles made the joint between leather and out-sole really waterproof. The price of these boots in Finland is about 145 Euros. 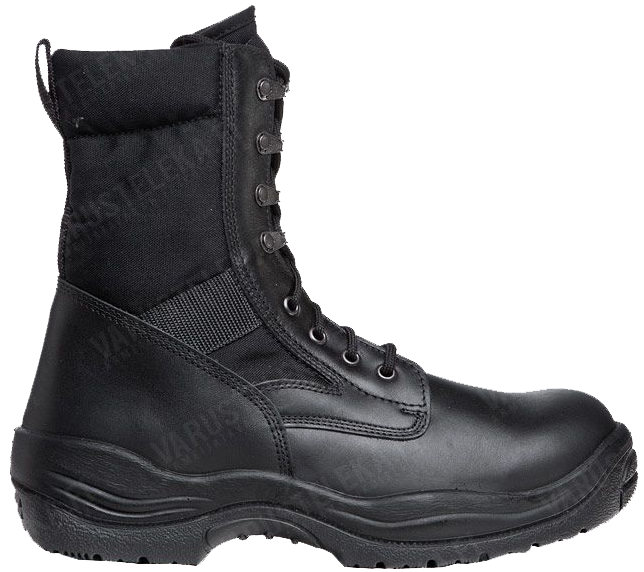 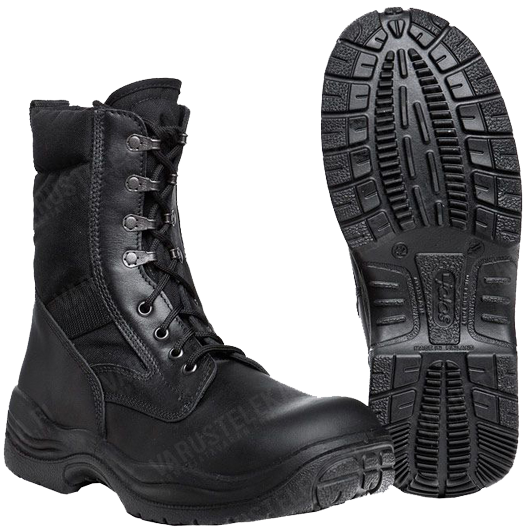 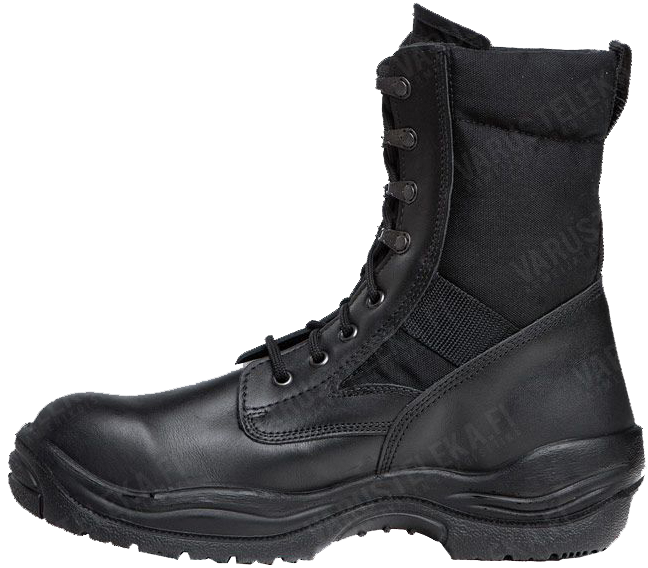 The soldiers of Finland who are currently involved in peace-keeping operations in different "hot spots" of the world under a UN mandate use the same "desert boots" manufactured by HAIX as their German or Belgian colleagues. However, the Finnish footwear manufacturer "Jalas" has developed lightweight black shoes Model M05 for hot climates. 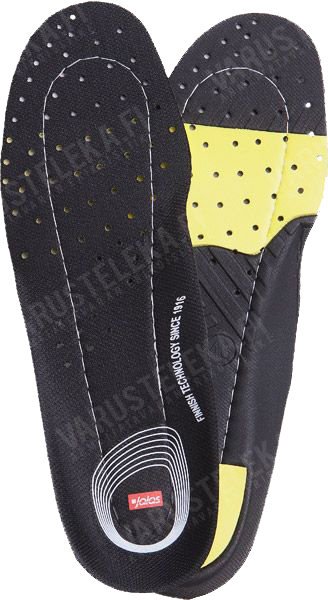 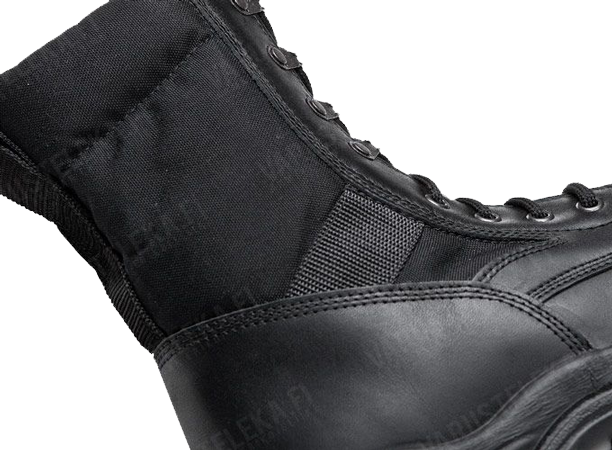 These Finnish army boots are styled similar to American black "jungle boots", which replaced the traditional green "jungle boots" of the mid-1990s and were made of composite materials: leather and "Cordura" nylon. Similarly to the black American boots, these Finnish boots feature soft "Cordura" cushion on the top and stitched-down reinforcing stripes of denser nylon on both sides of the boot in order to enhance the overall robustness and extra protection for the malleolus bones.

The out-sole also differs - it is new, just the same as in standard Finnish M05 boots. The lacing system is mixed: four lower pair of simple round eyelets are combined with four pairs of "MARK" speed lacing eyelets. The insole is removable, antibacterial and shock-absorbing. 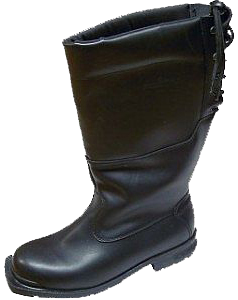 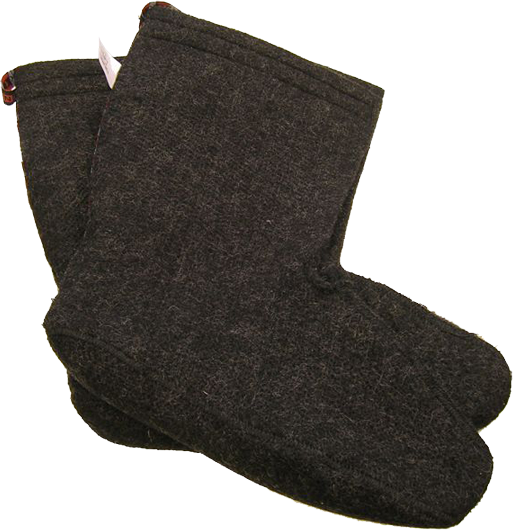 The difference of the Finnish Defence Forces (FDF) from the vast majority of the world armies is that the basic combat footwear is not leather, but rubber high boots ("Kumisaappaat" in the Finnish language) with removable felt lining. Such rubber high boots are also known under the trade name "Rokka". The price of such footwear in Finland is about 140 Euros. 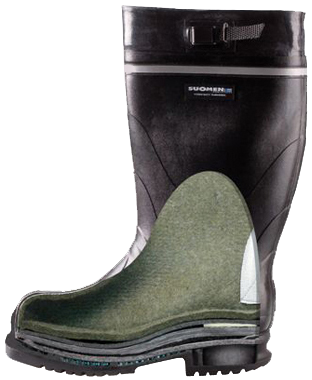 In fact, these rubber "wellies" represent a boots covered with a layer of durable rubber, mounted on a stable grooved sole. Climate and natural conditions of Finland fully justify this choice. Leather boots are mainly intended for garrison duty and for the use in warm and dry weather conditions.

The main supplier of such rubber boots for the FDF is a world-famous company "NOKIA" (or rather "Nokian Footwear Ltd.").

The "Nokian Footwear" company is the "descendant" of the "Suomen Gummitehdas Oy" ("The Finnish Rubber Products") company, founded in Helsinki in 1898.

For several years in Helsinki this company produced "galoshes", which due to their high quality appeared to be serious competitors of the same Russian-made products, and soon they took over the entire local market. In 1904, the production capacity of the company were transferred to the town of Nokia ("noki" means "soot" in Finnish).

Classic high rubber boots of "Kontio" type appeared in 1973, and the modern modification of them is widely used by the army of Finland. 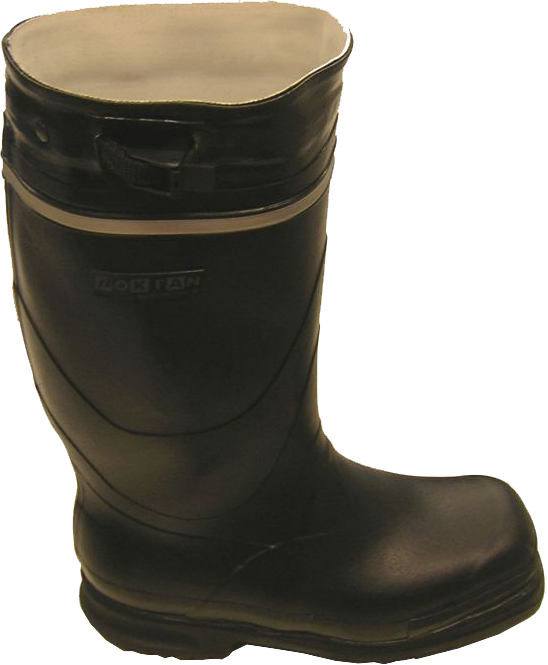 The company "Nokian Footwear Ltd." itself appeared in 1990 as a result of separation from the parent "Nokia" corporation, which focused on the manufacture of telecommunications equipment and got rid of all the other branches of production, not associated with this adbanced electronic industry. 15 years later, in 2005, the "Nokian Footwear Ltd." became a part of the "Berner Ltd." company.